Regional Variation in the Incidence of E. coli O157:H7 on the Hides and Carcasses of Feedlot-Finished Cattle

Hide and pre-evisceration carcass samples were obtained from nine fed cattle slaughter plants from the major cattle-producing regions of North America. 2,700 hide and 2,700 carcass (n=5,400) samples were collected from the nine fed-cattle slaughter plants. For each plant, 300 samples of each type were collected, with sampling occurring on three days with 100 hide and 100 carcass samples obtained on each day. Sampling with wetted sponges was done at two locations on the processing line: (1) hide, sampled after hide opening before hide removal and (2) pre-evisceration, immediately following dehiding before any antimicrobial applications. Samples were analyzed for Enterobacteriaceae counts, aerobic plate counts, and prevalence of E. coli O157:H7.

The results of this study suggest that there are day-to-day differences but not regional variation in the prevalence of E. coli O157:H7 on the hides and pre-evisceration carcasses of feedlot finished cattle. 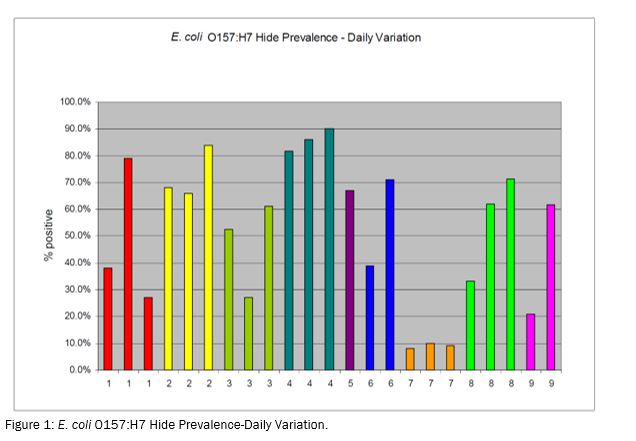