Survey of the Prevalence of Escherichia coli O157:H7 on the Surface of Sub-Primal Cuts of Beef During Winter Months (Phase I)

The USDA FSIS published a notice in the Federal Register of January 19, 1999 stating its intention to include non-intact beef products in the Escherichia coli O157:H7 testing program. Concerns that prompted the release of this notice were that intact cuts of beef further processed into non-intact products may have pathogens introduced below the meat surface and therefore require a higher internal cook temperature to render the product safe for consumption.

In June 2003, a Chicago processor of steaks and other meat products, voluntarily recalled 739,000 pounds of vacuum packaged steaks and other meat products injected with meat tenderizers due to possible E. coli O157:H7 contamination. This recent recall highlights the need determine the extent to which E. coli O157:H7 is present on the surface of sub-primal cuts prior to mechanical tenderization.

The stated objectives for this work were:
To determine the prevalence of E. coli O157:H7 and indicator microorganisms on the surface of beef sub-primals prior to the enhancement process. This data was collected during the winter months.

PRODUCTS
Six representative sub-primal cut types representing 3 commodity and 3 closely trimmed cuts were sampled in this study. Products included “chuck tenders”, “1/4 trimmed strips”, “bottom round flat”, “rough trimmed brisket”, “cap-on top round” and “cap-off insides”. One hundred samples each of the six sub-primal types were collected from five plants (i.e., total of 600 samples) located in the Midwest, the southern Midwest, the northern Midwest and the Southeast over a six-week period between 1/6/04 and 2/19/04.

SAMPLE COLLECTION AND SHIPPING
Samples were collected from the entire surface of each sub-primal just prior to the beef enhancement process using the sponge technique. Sponges were hydrated in 20 mL Buffered Peptone water (BPW). An exception to this technique occurred with Plant E in that their sponges were hydrated in 10 rather than 20 mL BPW. Each sub-primal was sampled using only one sponge. Both sides of the sponge were used to sample each sub-primal. Each individual sub-primal bag was considered a lot and placed on “hold and test” status until results for E. coli O157:H7 analyses were completed. Product was handled and held differently depending on the product and facility.

The sponge samples were collected at the respective plants of the industry cooperator/collaborators, aliquots were removed for indicator organism analyses (see Section C), and the sponge samples were shipped on the same day to ABC Research Corp. unless they were collected during second shift. In that case, samples were sent the following day. Sponges samples (in stomacher bags) were shipped in insulated containers with ice packs in a way to assure that sponges were not frozen but remained at refrigeration temperature during transport via overnight courier. Each sample shipment included the following information: the lot, the product code and age of the product A sample analysis request form was completed for each set of samples sent to the ABC Research Corp. Upon receipt at the laboratory, the temperature of each cooler was taken and documented in the laboratory notebook.

E. coli O157:H7 Analyses (conducted by ABC Research Corp.).
These methods were provided by Ted Brown of Cargill Foods in consultation with Dr. Mohammed Koohmaraie of USDA-ARS. Sponge samples were stomached for 60 seconds to ensure sample homogeneity. A 1ml aliquot from the sponge sample was extracted for use in the most probable number procedure (MPN) procedure developed at USDA Meat Animal Research Center.

For the E. coli O157:H7 presence/absence analyses, each sponge (and associated rinsate) was enriched with 80mL of trypticase soy broth (TSB). The TSB was tempered to 25°C prior to addition to sponges. After addition of the TSB, the sponge and TSB was stomached for 60 seconds on medium speed. Prior to incubation, sponge samples were checked to make certain sponges are turned so they are immersed in enrichment media. A positive and a negative control sample were included in each set of analyses. Samples and controls were incubated for 2 hours at 25°C and subsequently for 10 additional hours at 42°C. After the 12-hour incubation, samples were held overnight at 4°C. Samples were then analyzed for the presence of E. coli O157:H7 using BAX-PCR methodology. Samples positive for the presence of E. coli O157:H7 were enumerated using the most probable number (MPN) procedure.

For the MPN sample preparation, deep-well microtiter plates with 900μL of TSB in each well were prepared as shown in Table A (see below). Each sample was analyzed using a 3 well x 4 dilutions MPN series each made from the original 3 wells as follows:

Indicator microorganisms.
The results of the corresponding indicator organism survey of the six types of beef sub-primal cuts during the winter months are also presented in Table 1a. The comprehensive results for each beef sub-primal cut are also presented in the Appendix Tables 1 - 6. The recovery of aerobic plate counts, total coliforms and generic E. coli were variable within each sample set of each sub-primal and between sub-primal types. It should be noted that the levels of generic E. coli were very low and/or undetectable for most of the sub-primal samples. In fact, generic E. coli was not detected in 81, 78, 94 and 83%, respectively, of chuck tenders, trimmed strips, bottom round flat, and cap-off insides samples.

These results indicate that the incidence of E. coli O157:H7 contamination on the surface of beef sub-primal cuts intended for mechanical tenderization (enhancement) is very low (i.e., <0.17%) with no E. coli O157:H7 being detected in any of the 600 sub-primal samples during January and February of 2004.

A previous study (NCBA Project Report, 2003) demonstrated an extremely low internalization rate of surface contaminating E. coli O157:H7 into subprimals by blade tenderization. These results along with those of the previous internalization study indicate that internal contamination of beef sub-primals with E. coli O157:H7 via mechanical tenderization (enhancement) is a very improbable phenomenon. 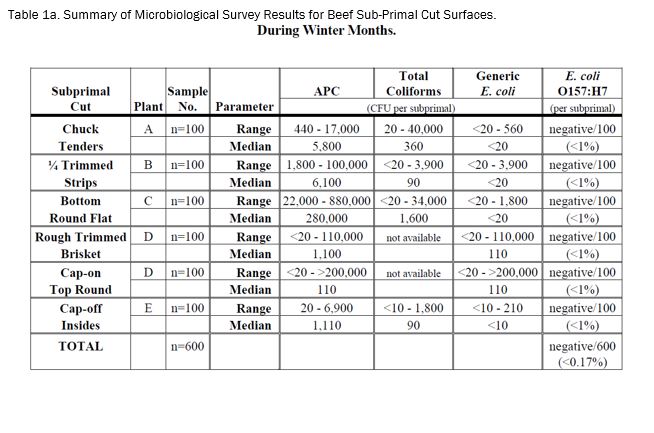