Survey of the Prevalence of Escherichia coli O157:H7 on the Surface of Subprimal Cuts of Beef During Summer Months (Phase II)

The Food Safety Inspection Service of the U.S. Department of Agriculture (FSIS-USDA) defines non-intact beef products as ground beef; beef injected with solution; beef that has been mechanically tenderized by needling, cubing, frenching or pounding devices, and beef that has been reconstructed into formed entrees (FSIS-USDA, 1999). The use of techniques such as needle or blade tenderization, and enhancement by injecting subprimals with a brine or marinade solution, has become a common means of improving quality attributes of beef products. Whole muscle cuts (e.g. chucks, ribs, tenderloins, strip loins, top sirloin butts, rounds) may be treated with these technologies to increase tenderness or to add ingredients for quality purposes. The treatments often occur before fabrication into steaks and may include solid needle or hollow- needle tenderizing, in which a solution is pumped into the whole muscle. In the latter case, the solution typically is recirculated, refrigerated and may be treated to ensure quality.

Non-intact products are considered by FSIS to be high-risk due to the potential internalization of pathogens via the mechanical tenderization process. Consumers perceive non-intact beef products to be whole muscle cuts, and subsequently may not cook them to a sufficient internal temperature to destroy harmful bacteria. In 1999, the Food Safety Inspection Service (FSIS) published a notice stating its intention to include non-intact beef products in the Escherichia coli O157:H7 testing program. As the use of tenderization techniques becomes more common as a means of improving beef quality, it is important to understand the implications for beef safety.

The objective of this study was to determine the prevalence of E. coli O157:H7 and indicator microorganisms on the surface of beef subprimals prior to mechanical tenderization or moisture enhancement.

Most of the samples were collected in August and September. A total of 599 samples were collected (100 chuck tenders, 100 trimmed striploins, 100 bottom round flats, 97 briskets, 102 cap-on inside top rounds and 100 cap-off inside top rounds). Samples were collected using sponge swabs from the entire surface of each subprimal just prior to the cuts being mechanically tenderized. The sponge samples were shipped to a laboratory facility where aerobic plate counts (APC) and generic E. coli/coliform analyses were performed. Samples were analyzed using BAX polymerase chain reaction (PCR) methodology. Any samples positive for the presence of E. coli O157:H7 were enumerated using the most probable number (MPN) procedure.

No E. coli O157:H7 was detected on the surface of any of the 599 beef subprimal samples analyzed over the 16-week survey period. The chuck tender, trimmed striploins, bottom round flat and cap-off inside products were all sampled in August and September 2004, whereas the trimmed brisket and cap-on top round products were sampled from August through November 2004. The overall incidence of E. coli O157:H7 was less than 0.17 percent.

While previous research has shown that internalization of pathogens is possible during needle tenderization and moisture enhancement, the likelihood of it occurring is extremely low due to the low prevalence of pathogens on the exterior of subprimals. This research further demonstrates that the presence of E. coli on the surface of subprimals destined for further processing into non-intact beef products rarely occurs. 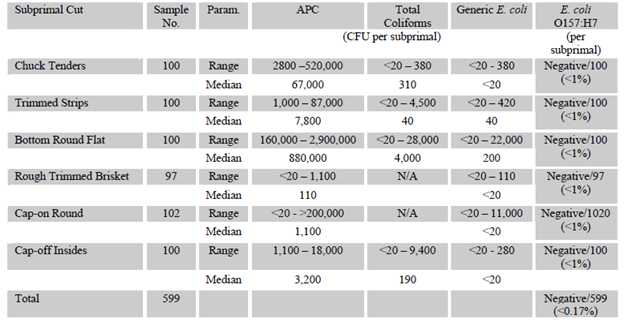