Recent petitions to FDA and USDA have requested the re-evaluation of carbon monoxide gas as an approved packaging component. The Food and Drug Administration (FDA) and USDA FSIS requires that approved processes and/or ingredients do not in any way result in the product becoming adulterated or misbranded including the presence of microbial pathogens (FSIS, 2003). Thus, research was needed to provide the industry and government officials with scientific data regarding the safety characteristics of various packaging systems commonly used in the beef industry.

To determine the safety of ground beef packaged with carbon monoxide gas flush, hi-oxygen gas flush, and rosemary oleoresin in modified atmosphere packaging of ground beef patties by determining the growth or survival of E. coli O157:H7 and Salmonella over time.

The project was a split-plot design with meat block serving as the main plot, and blocked by a retail display case. Data was analyzed using the GLM procedures of SAS (Cary, NC). Least-square means were computed for each dependent variable, and statistically separated by pair-wise t-test (PDIFF option of SAS) with predetermined α = 0.05. MAP samples could not be unpackaged and used for repeated measures, so samples were replicated over time.

Preparation of Patties
Coarse ground beef was obtained from a commercial processor immediately after its release from the company’s “test and hold” program, and transported to the Texas Tech University BSL II Pathogen Processing Laboratory for processing. The coarse ground beef was placed in a mixer and blended prior to a final grind. After the final grind, patties were formed (150 g) using a hand operated patty maker. All equipment was cleaned, rinsed and dried between each treatment. Rosemary extract was added to the coarse ground beef and mixed prior to a final grind. Additionally, concentrated cultures of a 3 strains mixture of Salmonella and a 4 strain cocktail of E. coli O157:H7 were added during grinding to yield populations of approximately 1 x 104 cfu/g. Beef patties were evaluated for changes in microbial loads over time (0,1, 3, 5, 7, 14 and 21 d) under simulated retail display conditions using coffin-style and multi-deck cases under continuous fluorescent lighting (approximately 1900 lux using high-output bulbs with a color temperature rating of 3500°K).

Similar results were observed for samples inoculated with Salmonella. On day 7, the initial populations ranged from 4.40 to 4.58 log10 cfu/g (Figure 2). There were significant differences observed among the treatments after 3 days of storage. Samples packed in traditional packaging had total Salmonella counts of 5.20 log10 cfu/g while all those in MAP packages were significantly lower at 4.50 log10 cfu/g. Similar results were observed on day 5, but after 7 days there were no significant differences among the treatments. After days 14 and 21 the total Salmonella in the ground beef subjected to traditional overwrap packaging was at 4.29 and 4.27 log10 cfu/g, respectively which was significantly higher than counts in the MAP packages which were between 4.30 and 3.94 log10 cfu/g on day 14 and between 3,75 and 4.01 log10 cfu/g on day 21.

Over time the reductions in E. coli O157:H7 and Salmonella could be occurring due to the presence of carbon dioxide in the atmospheres. It has been known for some time that carbon monoxide is inhibitory towards various microorganisms. Further research is needed to determine the inhibitory factors in the packaging gases.

For product packaged in modified atmospheres (high-oxygen (80% O2 / 20% CO2) and low-oxygen carbon monoxide (0.4% CO, 30% CO2, 69.6% N2) both with and without rosemary oleoresin) the total numbers of Salmonella and E. coli O157:H7 decreased over time. Modified atmospheres may be inhibitory to foodborne pathogens and may provide added safety to ground beef products. 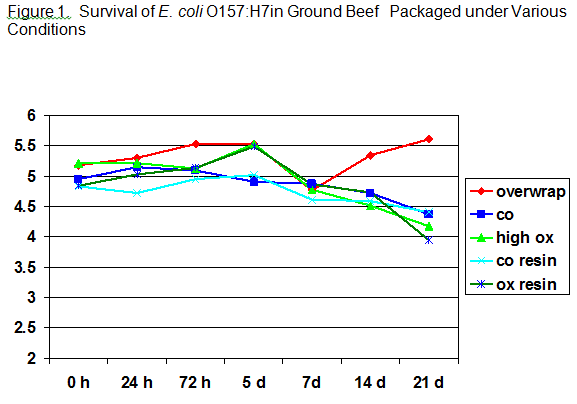 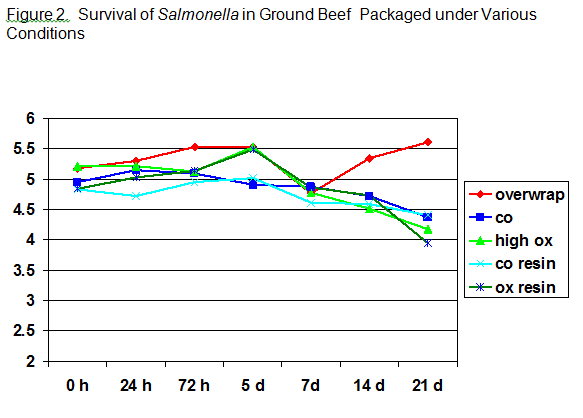