Although the removal of Specified Risk Materials (SRM’s) that contain BSE causing prions serves as the single most important food safety risk- mitigation intervention to protect public health (Hueston and Bryant, 2005), there are other possible sources from which infectious prion may reach the human food supply. Brown et al. (2001) affirmed that one of the ways in which human contamination can occur is by cerebral vascular emboli from cranial stunning instruments used to immobilize cattle before killing by exsanguination. The stunning method may cause clots in blood vessels which if they remain fixed are known as thrombi. However, if the clot becomes loosened from its attachment and floats freely in the bloodstream, it is known as an embolus (Bone, 1982). Most cattle within the United States are stunned with a non-air inject penetrating captive bolt gun prior to exsanguination which may damage intracranial blood vessels and dislodge brain tissue (Anil et al. 2002). Furthermore, this brain tissue can enter the blood circulation via venous circulation, pass through the right side of the heart, and lodge in the lungs or enter the arterial circulation and be distributed to any part of the carcass, although this was demonstrated using air inject, penetrating stunning devices (Schmidt et al. 1999). For that reason, the Food safety and Inspection Service (FSIS) in U.S. prohibited the use of penetrating captive bolt devices that deliberately inject air into the cranial cavity of cattle (FSIS/USDA, 2004).

Nowadays there is an international concern about the continuous use of non-air inject penetrating-captive bolt stunning in cattle based on the evidence that they can also produce central nervous system (CNS) tissue dissemination in the blood (Coore et al. 2005). If the outcome is that non-air inject penetrating captive bolt stunning has to be discontinued due to meat safety concerns, there would be a move towards electrical stunning (Gregory, 2005).

One of the ways to detect and measure the presence and concentration of CNS materials following stunning is by quantifying markers for nerve tissue in the blood of animals. Schmidt et al (1999) developed a simple, safe, sensitive, and specific assay for the detection of CNS tissue in blood and meat products using a Fluorescent-ELISA test based upon the immunological detection of a Glial Fibrillary Acidic Protein (GFAP). GFAP is an antigen largely restricted to the CNS, where it is present in high concentrations (Schmidt et al. 199, 2001). It thus provide an excellent marker for the presence of CNS tissue in blood and meat products (Hossner et al. 2005)

In 2 Phases, determine the necessity for BSE risk mitigation practices associated with stunning/immobilization of slaughter cattle by quantifying the concentration of GFAP in blood from living animals and from animals exsanguinated with and without stunning prior to sticking.

Phase I. Evaluate a post-stunning risk mitigation practice (heart defibrillation, HD) to reduce the likelihood of nerve tissue dissemination in the blood of animals after penetrating-captive bolt protocols.

Phase I.
Intravenous catheters were inserted in the jugular vein of 10 heifers (average weight 505 kg) at Colorado State University Agricultural Research Development and Educational Center (ARDEC) (CSU, Fort Collins, Colorado). Following a 48-hour withdrawal period for Lidocaine, two defibrillator and three electrocardiogram (ECG) pads were firmly applied to the shaved hide of each heifer. Cattle were harvested at the Colorado State University Meat Laboratory. Five of the animals were stunned using a cartridge-fired, non-air inject, penetrating captive bolt (PCB) stunning device (Schermer) , and the other five animals were stunned with the same PCB device immediately followed by an electrical shock generated by a commercial hands-free heart defibrillator (Hewlett Packard Code Master XL+) charged to 360 Joules. Six blood samples were taken from the jugular catheters of each animal (n=60). The first sample was taken prior to PCB stunning and five samples were collected immediately following stunning at approximate 90 seconds intervals for 6 minutes following stunning. In one instance all samples were collected during exsanguination as the jugular cannula was damaged during handling and stunning. At each sampling interval 4 ml of blood were collected and divided into 2 Vacutainer™ tubes, one containing K2EDTA anticoagulant and the other containing Sodium Heparin anticoagulant. Samples were immediately refrigerated at 2oC. Heparinized tubes were centrifuged at 800 x g for 30 minutes at 4o C, and the buffy coat was removed using Pasteur pipettes and transferred to small capped tubes of 5 ml (BD Falcon). Both buffy coat (n=60) and whole blood (n=60) samples, were kept refrigerated and transported the following day in an insulated box with ice packs to Warren Analytical Laboratories Inc. (Greeley, Colorado) for F-GFAP analysis. In addition, ECG’s of the animal were recorded pre and post – stunning using three-wire electrodes. The electrodes were firmly applied such that two electrodes were on the left thoracic wall (black and red leads) and one on the right thoracic wall (white lead).

A capture Fluorescent – Enzyme Linked Immunosorbent Assay for Glial Fibrillary Acidic Protein (F-ELISA GFAP) was used to detect CNS tissue contamination of whole blood and buffy coat (Hossner et al. 2005). The protocol followed was the same used by Coore et al. (2005). An aliquot of each blood sample prior to centrifugation (whole blood) and after centrifugation (buffy coat) was analyzed to detect the presence of CNS tissue. The detection limit for this assay was 0.006 ng/mg for whole blood and buffy coat. A result of <0.006 ng/mg denotes a non-detectable level of GFAP.

Phase II.
Between July and October 2005 blood samples (N=390) from random cattle in thirteen commercial beef processing facilities were collected as soon as possible following exsanguination. Twelve of the plants utilized a pneumatic non-air inject PCB (PPCB) device. The remaining plant employed ritual (Kosher) slaughter techniques, immediately followed by PPCB stunning. When possible, cattle that required more than one shot to be rendered unconscious were omitted from the study. However, in two plants the blood samples were taken in a location from which the stunning box was not visible, so we cannot be assured that samples from these facilities were from single shot stunned cattle. Blood was aseptically collected in large disposable cups (150 ml) and then transferred to two Vacutainer™ tubes, one containing K2EDTA (10 ml) and the other containing Sodium Heparin (10 ml) anticoagulant. This resulted in blood samples being collected from 360 PPCB stunned cattle and 30 Kosher slaughtered cattle. After collection, all samples were refrigerated and placed in coolers with ice packs for shipments to Warren Analytical Laboratories Inc (Greeley, CO) for F-GFAP analysis. After arriving to the Laboratory heparinized tubes were immediately centrifuged at 800 x g for 30 minutes at 4o and the buffy coat fraction was collected for analysis. Whole blood and buffy coat samples were analyzed using the same F-GFAP ELISA test employed in Phase I.

In Phase 1 of the study, the results of the ELISA test showed that GFAP was absent from whole blood and buffy coat samples taken before and after PCB stunning with or without HD. ECG recordings were successfully obtained from 9 of 10 animals before stunning. In the remaining animal the electrode leads became disconnected during monitoring. The mean heart rate of cattle before stunning was 126 (SD=32) beats per minute (bpm) with a minimum and maximum of 89 and 188 bpm, respectively. The electric shock given by the heart defibrillator charged to 360 Joules after PCB stunning did not render the heart electromechanically silent permanently (Fig. 1a). On average, defibrillation stopped heart beating for 0.48 seconds, with a minimum and maximum of 0.44 and 0.52 seconds, respectively. Recorded average heart rate following defibrillation were 23 bpm (SD=8) with a minimum and maximum of 16 and 35 bpm, respectively, after the electric shock (Fig. 1b). Conversely, after PCB stunning without HD, animals showed a chaotic rhythm of the heart (as showed immediately following PCB and HD in Fig. 1a) followed by a tendency to recover normal heart rate and rhythm. Immediately following PCB stunning the mean heart rate was 165 bpm (SD=21), although the heart rate from 2 animals was not recorded because of the very abnormal ECG output. Heart rate measured three minutes after PCB stunning in one animal showed a normal heart activity with 85 bpm (Fig. 2) which would reflect the normal resting heart rate.

In Phase 2 of the study, one animal out of 360 sampled following PPCB stunning had detectable levels of GFAP in the collected blood samples. Levels were detected in both whole blood and buffy coat fractions with a concentration of 0.010 and 0.015 ng/mg of GFAP, respectively. According to our results, 0.28% of the cattle stunned with PPCB protocols would show brain tissue dissemination through the circulatory system. In addition, there is a 95% confidence that the prevalence of brain tissue in the blood of cattle after PPCB is less than 1.31% based on an exact Binomial confidence limits. We did not find GFAP, and hence brain tissue, in the blood of animals slaughtered with kosher protocol. 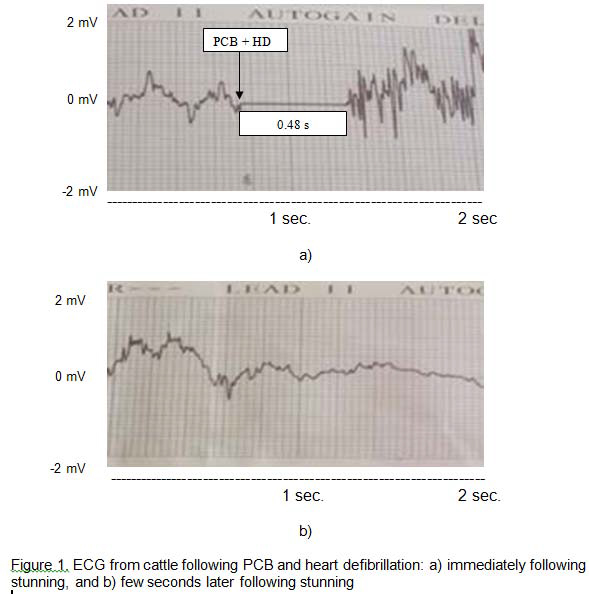 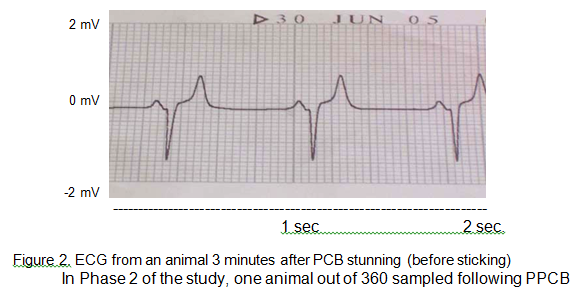