Escherichia coli O157:H7 is a foodborne pathogen that causes severe hemorrhagic colitis and hemolytic uremic syndrome (HUS) in humans (1).  According to the CDC, Shiga toxin-producing E. coli O157 causes an estimated 73,000 illnesses annually in the United States, resulting in over 2,000 hospitalizations and 60 deaths (2).  In 2003, the estimated annual cost of illness was $405 million, which included $370 million for premature deaths, $30 million for medical care, and $5 million in lost productivity (2).

The gastrointestinal tract of cattle is the main reservoir for E. coli O157:H7 and consequently, cattle feces are a major direct and indirect source of exposure for humans (3, and 4).  Recent data indicate that pre-harvest prevalence in groups of cattle is associated with subsequent likelihood of post-harvest contamination of carcasses (5).  Therefore, efforts to reduce carriage in harvest ready cattle will likely reduce the proportion of carcasses that are contaminated with E. coli O157:H7.  Furthermore, interventions used to reduce shedding of this pathogen will also lower contamination of the pathogen to the environment.

A recently developed vaccine that reduces the ability of Gram-negative bacteria to acquire iron (6) may be a practical intervention to reduce E. coli O157 shedding in cattle in a wide variety of production settings.  Iron is an essential nutrient for all Gram-negative bacteria including E. coli O157:H7 (7).  Iron in mammalian tissue is virtually unavailable because it is typically complexed with high affinity iron-binding proteins.  Under low iron conditions, pathogenic bacteria have evolved high affinity iron transport systems.  These systems consist of ferric iron chelaters, or “siderophores,” iron regulated outer membrane proteins (IROMPs), and siderophore receptor proteins (SRP®), which are receptors for the siderophores on the outer membrane of the bacterial cell (7).

Vaccine technology that effectively inhibits the siderophore receptor and porin system of E. coli O157:H7 should restrict iron transport into the bacterial cell.  If so, it will in turn, inhibit bacterial growth, reduce colonization in the intestine, decrease contamination to the environment (6), and reduce the likelihood of carcass contamination at slaughter.

A recent study has shown that this vaccine significantly reduced fecal shedding and promoted an immune response in 4 month-old mixed breed calves that were orally inoculated with a naladixic acid resistant strain of E. coli O157:H7.  Further application of this vaccine in a feedlot setting is deemed necessary to evaluate the efficacy of this new technology.  The objectives of this study were to examine the use of the SRP E. coli O157:H7 vaccine to control fecal shedding and reduce fecal carriage on the hides of E. coli O157:H7 in feedlot cattle.  Also, another objective of this study was to determine the effects on this vaccine on performance of feeder cattle.

Examine the use of the SRP E. coli O157:H7 vaccine to control fecal shedding and reduce fecal carriage on the hides of E. coli O157:H7 in feedlot cattle.  Also, another objective of this study was to determine the effects on this vaccine on performance of feeder cattle.

Cattle Twenty pens (1,252 head) of yearling steers and heifers were utilized to examine the effects of SRP E. coli vaccine on fecal prevalence of E. coli O157:H7 and its effects on feeder calf 3performance.  All cattle were backgrounded at the feedlot in which the study was conducted or at a nearby backgrounding facility prior to the beginning of the study.  The study was conducted at two feedlots located in central Nebraska.  Cattle were purchased in 10 groups of like sex.  Purchase groups 1 through 7 were fed at one feedlot and groups 8, 9 and 10 were fed a nearby feedlot.

Cattle within purchase group were randomly assigned to one of two treatments: 1) vaccinated on day 1 and 21 with an SRP E. coli O157:H7 vaccine or 2) vaccinated on day 1 and 21 with a placebo control.  All research personnel and feedlot personnel were blinded from treatment assignment.  Cattle were assigned to treatment by alternately assigning 5 animals to a treatment and the next 5 animals to the other treatment as animals moved through the processing barn until all the cattle in the purchase group were assigned.

Cattle were taken to their home pens which were pipe and cable fences with concrete fence-line feed bunks, and float-controlled water troughs. All cattle were weighed on days 0, 21 and 85.  On day 85, cattle were run through the chute for a “simulated slaughter”.  This was conducted due to the fact that E. coli prevalence has been shown to decrease as the season changes from summer to fall.  The start date of this study pushed the cattle toward the seasonal change.  Therefore to decrease the risk of having few positive cattle, the authors of this paper chose to run a simulated slaughter to get a more appropriate prevalence rate.

Cattle had ad libtum access to feed and water during the study.  Diets were formulated to meet or exceed National Research Council (1996) requirements for growing finishing beef cattle.  Since cattle had been backgrounded and transitioned to a finish diet prior to arrival, all cattle were placed directly on the finish ration on day one of the study.  Cattle were fed similar diets at each feedyard.  Cattle were fed a typical High Plains finishing ration (74.5% DM; 58 % corn, 30 % corn gluten feed, 6.5% alfalfa hay, rest was supplement).  The feed was delivered to the pens using a feed truck with a mixer box mounted on load cells. The amount of feed delivered was recorded at each feeding and feed records for each pen were kept electronically on a computer.

Sampling Procedures
Rectal fecal samples were collected on day zero as cattle were processed and placed in separate, pre-labeled sterile Nasco whirlpack bags (Fisher, Palatine, IL).  Subsamples (150 g) from twenty freshly voided fecal pats were collected from the floor of each pen and placed in separate pre-labeled, sterile whirlpack bags on days 21, 35, and 70.  All samples were placed in coolers on ice and transported to the KSU Food Safety Laboratory to be processed.

At the end of the trial (approximately day 85), a “simulated slaughter” was performed to evaluate the pen prevalence of E. coli O157:H7.  Rectal fecal samples, RAMS (rectal anal mucosal swabs) samples, and hide samples were collected from the first thirty animals of each pen to enter the chute.  RAMS samples were collected, according to Rice et al. (2004), using a sterile, foam-tipped applicator (VWR International, Buffalo Grove, IL), which was inserted approximately 2 to 5 cm into the anus and was allowed to gently scrape the epithelium of the rectoanal junction, while minimized amounts of fecal matter were allowed to come into contact with each swab.  The swabs were placed in culture tubes containing 3ml of gram-negative broth (BD, Franklin Lakes, NJ.) with 0.05mg/L of cefiximine, 10mg/ml of cefsulodon, and 8mg/ml of vancomycin (GNccv).  Hide samples were collected according to Elder et. al (2000), using Nasco Speci-Sponges (Nasco, Fort Atkinson, WI) moistened with 5ml of GNccv broth.  A 1,000cm2 area of hide along the back of each animal was swabbed in a “zig-zagg” motion and placed into separate pre-labeled, sterile whirlpack bags.  Approximately 150g of fecal material was collected rectally from each animal and was, also, placed into separate, pre-labeled sterile whirlpack bags.  All samples were placed in coolers on ice and transported to the KSU Food Safety Laboratory for further analysis.

Bacterial Culture Methods
Approximately 1 g of feces from each animal was placed in a pre-weighed tube containing 9 ml of Gram Negative Broth supplemented with cefiximine (0.05 mg/ml), cefsulodin (10.0 mg/L), and vancomycin (8.0 mg/L) (GNccv).  The fecal samples and RAMS samples (previously placed in 3 ml of GNccv broth) were vortexed for 1 minute and incubated for 6 hrs at 37°C.  Using a pre-calibrated omnispense, 20 mls of GNccv broth was transferred to each whirlpack back containing the hide samples.  Each bag was sealed and placed in the incubator for 6 hrs at 37°C.  All samples were then removed from the incubator and subjected to immunomagnetic separation (IMS; Dynal, Inc. New Hyde Park, NY) and spread onto sorbitol MacConkey agar supplemented with 50 ng/ml cefiximine and 2.5 μg/ml tellurite (CT-SMAC).  Plates were incubated overnight (16 to 18 hrs) at 37°C and after incubation, up to six sorbitol negative colonies from each plate were streaked to blood agar (Remel, Lenexa, KS).  The plates were then incubated, overnight, for 12 to 18 hrs at 37°C.  Growth on blood agar plates was tested for indole production and O157 antigen using latex agglutination (Oxoid Limited, Basingstoke, Hampshire, England).  Species was confirmed by API (Rapid 20E; Biomerieux, Inc., Hazelwood, MO) and polymerase chain reaction (PCR) was used to detect the eae A, stx 1, stx 2, hlyA, and fliC genes in each isolate. Genes were determined using TaqMan E. coli O157:H7 detection kits (PE Applied Biosystems, Foster City, CA) and the ABI Prism® 7700 Sequence Detection System (PE Applied Biosystems, Foster City, CA).   The amplified DNA fragments underwent gel electrophoresis using 2% (w/v) agarose (Fischer Scientific, Pittsburgh, PA) and were stained using 0.5 μg of ethidium bromide per ml.  The gels were visualized under UV light and genes were detected under a Gel-Doc 2000 fluorescent imager (Bio-Rad, Hercules, CA).

Statistics
The prevalence of E. coli O157:H7 in the feces (over time and at “slaughter”), on hides, on the rectoanal mucosa, and in either feces/hides/RAMS were the outcome variables of interest.  For each of these variables, pen-level binomial response variables were created and analyzed using the GLIMMIX procedure in SAS (Windows 9.1.3).  Replicate was included as a random variable in a random intercepts/slopes model.  When analyzing pen-floor samples, repeated measures methodologies (GENMOD procedure) were used to account for within-pen dependency over time.  Least-square means were computed, back-transformed to normal scale, and converted to risk.  From estimates of risk, relative risk and vaccine efficacy was calculated.  Means were compared using pair-wise comparison techniques in the longitudinal model to determine whether there was a vaccine effect, to determine the magnitude of the effect (vaccine efficacy), and to determine when over time the sufficient magnitude of the effect was statistically different.

The SRP E. coli O157:H7 vaccine had no impact on the performance of feeder cattle.  This was expected due to the fact that beef cattle are natural carriers of this bacteria and E. coli O157:H7 generally does not cause disease in cattle.

Results from this study indicate that the E. coli O157:H7 SRP vaccine was effective in reducing prevalence of E. coli O157:H7 in cattle without impacting performance.  This siderophore receptor and porin protein vaccine technology may be another tool for preventing foodborne illnesses resulting from E. coli O157:H7 contamination of beef products. 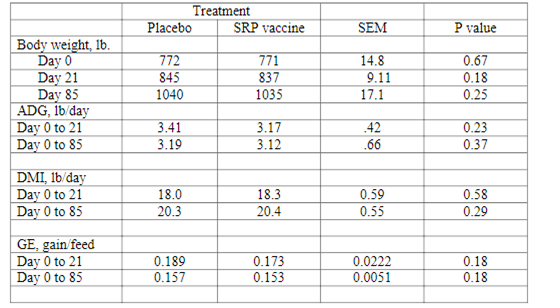