The lining of the intestinal tract in cattle secretes a protective layer of mucous that contains high concentrations of proteins and carbohydrates. This mucus layer protects the lining of the gut from physical abrasion, but also serves as an important food source for colonization of the gut by bacteria. There is evidence that the composition of intestinal mucus may directly influence makeup of the bacterial community within the gut, indicating a selective advantage for bacteria capable of utilizing mucus components. Pathogenic organisms, including E. coli O157:H7, are somewhat unique in terms of their ability to utilize some components of mucus, giving them a selective advantage for growth. Additionally, there is evidence to suggest some bacterial species can further sustain their growth advantage by directly influencing the composition of mucus secretions. It also has been well established that certain species of microorganisms also can produce compounds which stimulate mucus release by the host animal, thereby ensuring a continuous supply of food for the bacteria.

We have hypothesized that E. coli O157:H7 is capable of producing compounds that stimulate an acute release of mucus by the cells than line the wall of the gastrointestinal tract, thereby assuring that is has access to nutrients that can support its growth. Interestingly, mucus is secreted by the gut lining in two ways. First, there is a more-or-less continuous level of secretion. Secondly, some cells lining the gut wall also are capable of storing large quantities of mucus, and with the appropriate signals these cells release large quantities of mucus. We have speculated that this release of large quantities of mucus may provide nutrients needed to support rapid growth of pathogenic E. coli O157:H7. Once these stores are depleted, mucin production reverts to baseline levels, which presumably is not capable of supporting large numbers of pathogens. This provides a reasonable explanation for the evasive or sporadic nature of E. coli O157:H7.

Some of our previous research at Kansas State University has documented the stimulatory effects of mucus on growth of E. coli O157 in cattle feces and stomach contents. Additionally, we suspect that certain components of yeast cells are similar to the components of mucus. Since distiller’s grains normally contain large quantities of yeast, this may help to explain the commonly observed increases in prevalence of in E. coli O157 among cattle fed distiller’s grains.

At the outset of this project our intent was to evaluate mucus secretion in live cattle, and to relate mucus production to pathogen colonization rates. However, we were not successful in obtaining measureable quantities of mucus working with our surgically altered (intestinally fistulated) animals. Consequently, we opted to harvest intestinal tracts from cattle at a commercial abattoir, which made it possible to utilize large sections of the gut in order to obtain sufficient quantities of mucus for our experiments.

Our laboratory experiments consisted of batch cultures with and without cattle manure to which we added selected strains of pathogenic E. coli O157:H7 organisms. Mucus and several of the major components of mucus were added to the cultures to identify those chemical components that are most stimulatory to growth E. coli O157:H7 organisms. Additionally, we cultivated these pathogens in the presence and absence of several enzymes and enzyme inhibitors to determine if the intact compounds were more or less capable of stimulating pathogen growth when compared to the end products that result from enzymatic digestion of these compounds.

Our experiments have revealed that intestinal mucus and (or) its components can be highly stimulatory to growth of E. coli O157:H7. Greater amounts of mucus resulted in more extensive proliferation of E. coli O157:H7. Additionally, intact mucus was most effective in stimulating growth of the pathogen compared to isolated components of mucus. A possible exception to this was sialic acid, which was essentially equal to mucus in terms of its ability to stimulate pathogen growth. This is potentially an important observation, as substantial quantities of sialic acid can be found in distiller’s grains, which have in several experiments have been shown to increase prevalence of E. coli O157. Future experiments will focus on attempts to degrade sialic acid through enzymatic treatments.

We also observed that inhibitors of certain enzymes had a substantial impact on growth of pathogenic E. coli. Focusing on these enzyme systems may provide the basis for development of future intervention strategies.

This series of experiments has provided valuable information pertaining to several factors that influence growth of E. coli O157:H7 in cattle. The studies point to intestinal mucus and components of mucus as potentially important substrates that may promote growth of food-borne pathogens in the cattle gastrointestinal tract. Finally, the studies offer insight for further investigations directed toward the development of preharvest invention measures to inhibit proliferation of important food-borne pathogens. 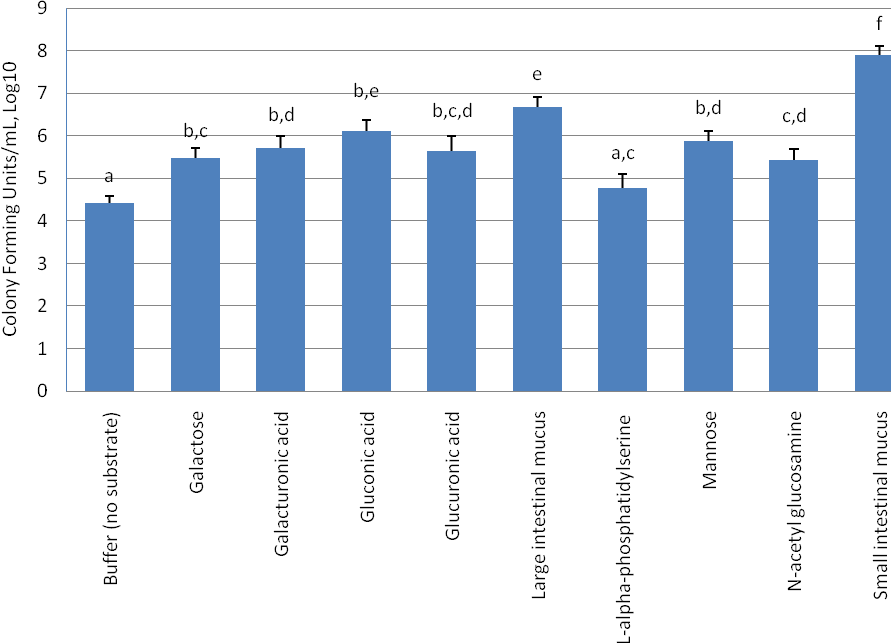 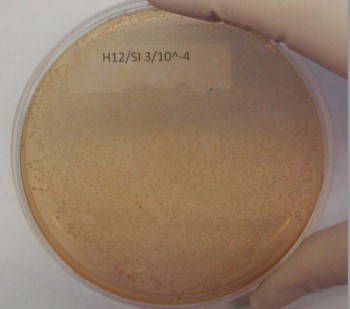 Photograph 1. Example of a culture plate used to enumerate E. coli O157:H7. Numerous dots covering the plate illustrate the extensive growth of E.coli O157:H7 when cultivated in the presence of intestinal mucus. 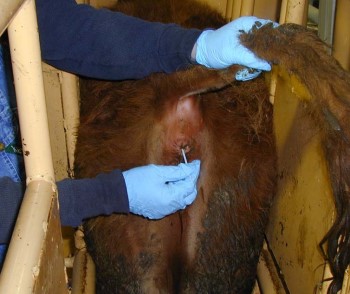 Photograph 2. Fecal material is recovered from an animal for use in experiments to evaluate effects of intestinal mucus on growth of E. coli O157:H7.