The Effects of the Salmonella Newport SRP® Vaccine in Feedlot Cattle

Salmonella bacteria can result in adverse health effects in both cattle and humans. In some cattle populations, Salmonella can affect health and production efficiency, but these effects are poorly defined for feedlot cattle. Salmonella are a significant cause of foodborne illness in the U.S., but human salmonellosis has been associated with many foods. Salmonella can be found on hides and in feces of cattle at harvest, which occasionally may lead to the contamination of beef. Consumption of contaminated beef has been associated with occasional human infections and few multi-state outbreaks due to drug-resistant Salmonella.

Preharvest interventions that would reduce the prevalence of Salmonella in the feedlot environment may enhance beef safety, and also may improve cattle health and performance. One potential preharvest strategy employs a novel vaccine technology, based on Siderophore Receptor and Porin (SRP®) proteins, which has been shown to be efficacious in controlling Salmonella in certain production systems. Although a commercial Salmonella Newport SRP® vaccine may decrease fecal shedding and improve the health and performance of animals, there are no data on the effects of the vaccine in a commercial feedlot environment. Therefore: our OBJECTIVES were 1) to determine the effect of the commercially available Salmonella Newport SRP® vaccine on prevalence of Salmonella in feces of commercial feeder cattle, and 2) to determine the potential vaccine effects on cattle health and performance outcomes in the feedlot.

We randomly allocated feeder calves to 20 paired pens as they arrived to a commercial Kansas feedlot in October 2008. Cattle were managed according to the feedlot’s standard health and management protocols. Our study protocols were approved by the K-State Institutional Animal Care and Use Committee (#2661). Ten pens were randomly selected to receive two doses of the vaccine (Salmonella Newport SRP®, AgriLabs, Ltd.) with ten corresponding pens selected to receive the placebo (Emulsigen, MVP Laboratories); hereafter vaccinated and control pens (treatment groups), respectively. To blind feedlot personnel to treatments, product labels were covered and bottles coded as “A” or “B” (Figure 1).

Pen weights were collected at arrival and preharvest. Cattle health and performance data were retrieved through the feedlot’s operational database. Samples (n = 25) of fresh feces were collected from the floor of each pen on days 0, 60, 120, and within 24 hrs of transport to harvest. A standard protocol was used to detect Salmonella (Barkocy-Gallagher, et al. 2002, J. Food Prot. 65:1527-34) with minor modifications. Data were analyzed using multivariable methods.

Steer calves (average weight 546 lbs) originating from livestock markets and ranches in KS, OK, TX and SD were enrolled into the two treatment groups of the study (Table 1). Overall, Salmonella were recovered from 10.75% (215/2000) of the fecal samples (Figure 2). Salmonella were recovered from all ten pairs of pens, with overall prevalence (all sampling times combined) ranging from 1.5% to 22%. Salmonella prevalence was affected by sampling time (P < 0.01), but not by vaccine treatment (P= 0.89). There was no significant treatment by sampling time interaction (P = 0.12). These data are displayed in Figure 2.

Our study of feeder cattle in a commercial feedlot production system revealed that vaccination with the Salmonella Newport SRP® vaccine had no impact on fecal prevalence of Salmonella and had no measurable effects on cattle health and performance. These findings may have been due to 1) an insufficient burden of Salmonella in this feedlot; 2) a lack of vaccine efficacy in this production setting; and/or 3) vaccine use in a subset of the cattle population reducing the overall burden of Salmonella such that all studied pens received insufficient Salmonella challenge (i.e. herd immunity). Although we did not detect differences attributable to this Salmonella Newport SRP® vaccine, we recognize the vaccine may prove to be efficacious in different cattle production settings and believe that efforts to control Salmonella in feedlot production systems may enhance food safety. 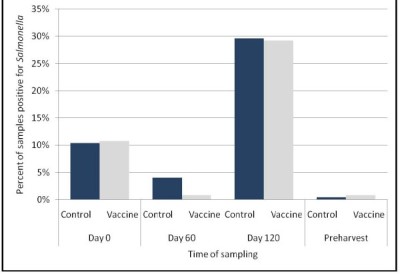 Figure 2. Overall fecal prevalence of Salmonella across all control (n = 10) and SRP® vaccinated (n = 10) pens for each sampling time.

Table 1. Summary of cattle health and performance outcomes for all SRP® vaccinated and control cattle (10 pens each). None of the outcomes differed statistically (all P values > 0.1).