Foodborne diseases cause and estimated 76 million cases of human illness each year in the United States. Public health authorities have established goals to reduce this number by 2010. It is expected that transitioning the current meat inspection system to a risk-based program- where plants processing the products which pose the highest risk for public health receive the most inspection coverage- will aid in this endeavor. Unfortunately, to date good estimates of which foods contribute the most to illnesses caused by specific pathogens are not available. This is particularly true of emerging pathogens such as non-O157 STEC, Campylobacter, and Clostridium difficile. Thus it is important to determine the potential of live cattle to contribute to the contamination of the food supply. Knowing the prevalence of pathogens in the live animal populations provides a baseline for future reference and an indication as to whether pre-harvest intervention to control these organisms might prove to be beneficial.

Shiga toxin-producing Escherichia coli (STEC) are a cause of diarrhoea, hemorrhagic colitis and hemolytic uremic syndrome (HUS) worldwide (Reilly 1998). E. coli O157 has been the most common serogroup of STEC causing disease in the US, but it is just one serogroup of Shiga toxin-producing E. coli frequently associated with human disease. There is growing concern that STEC, other than serotype O157:H7 (non-O157), are becoming more and more commonly reported in the US. It is estimated that the actual number of non-O157 STEC infections that occurs annually in the US meets or exceeds the estimated 70,000 infections caused by serogroup O157. To date, non-O157 STEC illness have not been traced to beef products.

Campylobacteriosis is the most common form of bacterial food poisoning in the US and worldwide causing up to $6 billion losses annually. There are 2.4 million estimated annual cases of human campylobacteriosis in the US. Although, poultry is considered as a major source for human infections, recent studies have suggested that eating non poultry meat prepared outside the home was also an important risk factor. Occupational exposure to raw meat, consuming ground beef, drinking unpasteurized milk and contact with cattle are implicated in Campylobacter infections. Since specific subtypes of Campylobacater are associated with specific reservoir host species, it is important to know which subtypes of Campylobacter are present in the bovine population, and determine if these subtypes occur in cases of foodborne disease.

Clostridium difficile is a pathogen originally restricted to hospitalized individuals. More recently cases caused by highly virulent strains of the organisms have occurred among people in the community. The emergence of community acquired infections, along with the isolation of toxigenic subtypes of the pathogen from ground beef and other meats has raised concern of the possibility of foodborne transmission of this organism. Although it is known that the bacterium could be isolated from very young and sick animals, the prevalence in the healthy adult population of cattle intended for slaughter was unknown. The objective is to compare the relative contributions of dairy cattle and fed beef cattle as sources of non-O157 STEC, Clostridium difficile and Campylobacter jejuni.

Cattle presented for slaughter at four distinct geographic regions within the US (Western, Southern, Central and Eastern) were sampled at the time of slaughter. Briefly, feces were collected from the colon of cattle immediately following slaughter. Approximately half of the cattle at each location were beef cattle. The other half of the animals were cull cows, primary dairy breeds. A total of 940 samples were collected: 480 from beef animals and 460 from cull cattle. Samples were shipped overnight to the laboratory for analysis. Using a variety of pathogen-specific microbiological and molecular methods, each sample was tested for the pathogens of interest. Specifically, samples were enriched and tested for the presence of thermotolerant Campylobacter spp., E. coli O157, E. coli O26, other non-O157 STEC and Clostridium difficile. Initial molecular characterizations were performed.

The results reported above are preliminary. Extensive molecular testing is required for confirmation and analysis of virulence gene composition. For example, there is a large number of E. coli serogroups that also encode Shiga toxin. Over 600 different STEC serotypes have been isolated from cattle. Fortunately, only a small number of STEC serotypes typically cause disease in the human population. The ability of a particular STEC to cause human disease is probably related to the complement of virulence genes that it possesses.

The USDA, in collaboration with the CDC and FDA recently sponsored a public forum to solicit input on the public health significance of various strains of non-O157 serogroups of Shiga toxin producing Escherichia coli. Valid scientific data is required to inform policy on regulations concerning these organisms. Our studies provide basic science information on the epidemiology of non-O157 STEC and several other emerging pathogens in US cattle. In addition, the methods used for the detection of non-O157 STEC in this study can be used to highlight potential problems and challenges associated with the detection and the interpretation of significance of Executive Summary these organisms in bovine feces and aid in the development of standardized protocols for non-O157 detection. This study marks on of the first large scale investigations of Clostridium difficile in cattle at slaughter. Two important results should be highlighted. First, we observed a difference in prevalence between cull cattle and fattened beef cattle presented for slaughter. This provides evidence that pre-slaughter management may impact C. difficile carriage by cattle. As such, pre-harvest intervention for populations of cattle at a higher risk for C. difficile carriage may provide an effective intervention tool. Secondly, given that the organism was not identified in 480 samples from beef cattle, we conclude that live fattened beef animals are not a significant source of contamination of ground beef. This does not completely rule-out the carriage of C. difficile by beef cattle; however, by our estimates the prevalence is lower than Control of C. difficile in beef products may reside primarily at the stages of processing and packaging. 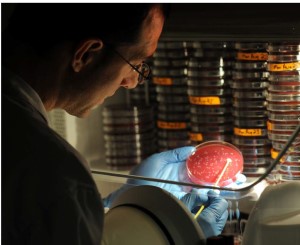 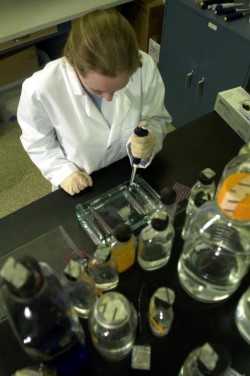