Antibiotic resistance in pathogenic bacteria causes difficulties in effectively treating some bacterial infections. Bacteria may acquire resistance genes through Class 1 integrons under environmental pressures. Integrons have been widely reported in clinical isolates and isolates from food animals. Recently, the presence of integrons in urban and pristine areas has drawn attention to the transfer of resistance genes between integron-associated settings. Investigating the presence of Class 1 integrons in agricultural and other environments could help us recognize resistance gene reservoirs and their movements among ecosystems in response to various pressures.

·       Total and antibiotic-resistant bacteria counts determined by both culture plating and real-time PCR methods were not significantly different in soil, fecal and water samples from cattle operations and non-farm environments.

·       Most Class 1 integrons had one gene cassette belonging to the aadA family which confers resistance to streptomycin and spectinomycin (Table 1). 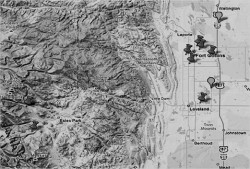