Raw beef has been shown to represent a potential source of contamination for the consumer. Hides containing pathogens such as E. coli O157:H7 or Salmonella are among the principal sources of pathogens contaminating carcasses. This contamination mechanism is generally considered a “direct” transmission from the hide onto the carcass. However, the plant environment may serve as an “indirect” source of transmission, from the hide to surfaces which may become niches serving as a source for further transfer onto the carcass. This project utilized novel marker organisms to determine if transmission could occur from inoculated hides via environmental sources (walls, floors, general equipment, personal equipment) onto the carcass, and from the carcass with the inoculated hide to subsequent carcasses

The objective of this study consisted of inoculating the hide of beef cattle at slaughter with fluorescent nonpathogenic bacteria as surrogates for E. coli O157:H7 and Salmonella. The study was conducted at 3 different abattoirs with the objective of identifying the impact of the post-harvest processing environment on pathogen contamination.

The project was conducted in 3 commercial abattoirs. At each abattoir, the hides of 13 cattle were inoculated after stunning, using a hand held sprayer with the gelatin slurry containing a nonpathogenic, fluorescent-marked E. coli cocktail to cover as much as possible at the midline (brisket and chest). Each inoculated carcass was followed through the normal harvest process and sampled after hide opening, prior to evisceration, after evisceration, after splitting, and after final intervention. The carcass immediately following each of the inoculated carcasses was also tested at the same points to determine cross contamination between carcasses. In total, 26 carcasses were sampled at five processing stations at each abattoir. In addition, environment samples were collected after the last carcass sample collection at all three abattoirs. All samples were packed in an insulated cooler with refrigerant packs and transported to the Food Microbiology Laboratory at Texas A&M University, College Station, Tex. After arrival samples were kept at 4oC until subsequent microbiological testing.

The plate counts of fluorescent organisms on carcasses obtained from inoculated and subsequent carcasses (non-inoculated) at the 3 sampled abattoirs are shown in Table 1. It was clear that the 3 microorganisms were transferred from the inoculated hide to the carcass and that these microorganisms remained on the carcass until subjected to the final carcass intervention (AFI stage). The counts differed significantly between abattoirs. Abattoir 1 was the smallest of the establishments (25 head per hr) with a plant layout following a straight line. In contrast, abattoirs 2 and 3 were considerable larger (98 and 140 head per hr, respectively). The fact that none of the carcasses yielded detectable counts after the carcass intervention step highlights the importance of these interventions in reducing pathogens on beef carcasses.

The presence of the pathogen surrogates in environmental samples, although sporadic, indicates that pathogens can be transferred from a contaminated animal to the processing environment during hide removal. Figure 1 provides the proportion of detectable environmental samples. These results highlight the importance of following proper procedures for sanitary dressing of beef carcasses and implementing effective sanitation programs to reduce carcass contamination.

For all carcasses that were sampled, the pathogen surrogates were reduced to below detectable levels following the in-plant antimicrobial intervention. 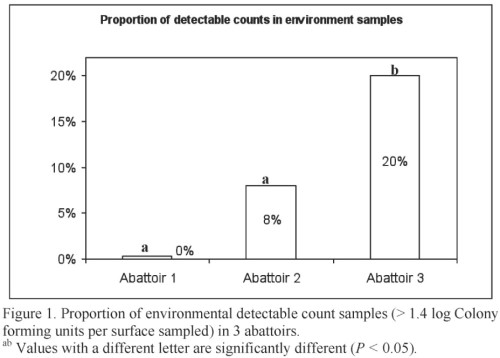 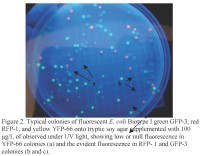 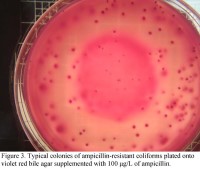