The Effect of Lactic Acid and Cooking on the Survivability of E. coli O157:H7 in Needle Tenderized Beef Steaks Managed Under Simulated Industry Conditions

Lactic acid is used as an antimicrobial to control or reduce bacterial contamination.  One bacterium that lactic acid helps to control is E. coli O157:H7.  Lactic acid was first discovered by Swedish chemist Carl Wilhelm Scheele in 1789 while investigating the souring of burgundy wine (Benninga, 1990).  Since then scientist have found that lactic acid helps in controlling different bacteria.  Most facilities use lactic acid as a critical control point (CCP) in their HACCP plans.

The objective of this research was to characterize the effects of lactic acid spray on needle-tenderized beef strip loins inoculated with low and high levels of Escherichia coli O157:H7 prior to cooking to various endpoint temperatures.

USDA Standard strip loins (n = 40) were obtained from a commercial processing facility and transported to the BSL-II pathogen processing facility at Texas Tech University in Lubbock, TX.  The strip loins were randomly allotted to two trials. Trial 1 included 20 strip loins inoculated with a 105 cfu/cm2 E. coli O157:H7 cocktail (High inoculation), with an actual attachment rate of 103cfu/cm2.  Trial 2 followed the same procedure - 20 strip loins inoculated with a 103cfu/cm2 E. coli O157:H7 cocktail (Low inoculation), with an actual attachment rate of 101cfu/cm2.  Trial 1 and Trial 2 included the inoculation of five strip loins and were replicated 4 times. The E coli O157:H7 cocktail was made with four strands isolated from cattle (ATTC A4 966, A5 528, 966 and A1 920) of E. coli O157:H7 each associated with CDC-documented outbreaks.  The strip loins were immersed for approximately 15 seconds per side.  The strip loins were then allowed to stand for 10 to 15 minutes at approximately 3°C to allow for E. coli O157:H7 attachment.  After attachment, strips were allotted numbers, and approximately one-half of the inoculated strip loins (3 from the low and 2 from the high inoculations, alternating with each rep) were treated with 5% lactic acid using a spray cabinet with conveyorized wire belt (Chad Co.).  After treatment with lactic acid, all strip loins (treated and non-treated) were vacuumed packaged and stored at 0-4°C for 21 days.  On day 21 of storage, control and treated samples were removed from their vacuum bags for mechanical tenderization with a blade tenderization unit (Model H, Jaccard, Orchard Park, NY).  Strip loins were placed external fat side down with needle penetration initiated on the lean side.  After tenderization, the strip loins were portioned into 2.54 cm thick steaks, while each steak was identified and individually vacuum packaged.  Packaged steaks were then stored at approximately 3°C for 7 d in the absence of light.  The needle tenderization equipment was cleaned and sanitized between each strip loin.  After the 7d storage period (28d after inoculation) steaks were transported to the laboratory under refrigeration for cooking and microbial analysis.  The steaks were randomly allotted to five targeted internal temperatures (55, 60, 65, 70, and 75°C) while an additional steak from each strip was not cooked (raw) to determine internal microbial counts.  Prior to cooking, steaks were threaded with Type J thermocouple wiring to allow for continuous temperature monitoring.  Steaks were grilled on a George Foreman grill to their targeted end point temperatures.

Prior to mechanical tenderization on d 21, both fat and lean surfaces of the strip loins were sampled using sponges moistened with 9 mL of BPW (buffered peptone water).  At this point, the samples were spread plated on MacConkey’s agar with a TSA (Triptic Soy Agar) overlay to help the injured E. coli O157:H7 cells to recover and grow.  The MacConkey’s agar was mixed with potassium tellurite and novobiocin sodium salt to control background flora growth.  Plates were incubated at 37°C for 18 to 24 hours. The colonies of E. coli O157:H7 were then counted.

The microbial profile of the internal portion of each strip loin steaks was measured after cooking to six internal temperature end-points.  The High and Low inoculated subprimal samples were also swabbed 15 min after inoculation with the E. coli O157:H7 cocktail (both fat and lean surfaces) as well as after treatment with 5% lactic acid (again, both fat and lean surfaces were sampled).  The samples were plated using MacConkey’s agar, mixed with potassium tellurite and novobiocin sodium salt, and overlaid with TSA. Plates were incubated at 37°C for 18 to 24 hours.  The colonies of E. coli O157:H7 were hand counted.

Prior to cooking on d 28 post inoculation, the individual steak surfaces were swabbed before cooking and five minutes after reaching the desired internal cooked temperature.  After cooking, a core sample was obtained from each steak.  The core sample was ground using a food processor and approximately 142 g of the ground samples was placed into a stomacher bag with 90mL of added enrichment broth.  The samples were then stomached for 2 min and then placed in an incubator at 37°C for 18 to 24 hours.  After enrichment, samples were analyzed with BAX system to test the presence of E. coli O157:H7.

The proportion of surface swab samples positive for E. coli O157:H7 after the cooking of steaks taken from high inoculated beef subprimals are presented in Figure 4.  The data indicate cooking destroyed E. coli O157:H7 surface counts on the steaks for all samples except one.  The positive sample was found among steaks cooked to an internal temperature of 55°C after samples were enriched and analyzed with the BAX system.  Although great efforts were taken, this positive sample was likely the result of cross contamination rather than treatment.

Steaks Low Inoculation (103 log CFU/cm2) of E. coli O157:H7:
On day 28 of storage, surface swabs were taken on all steaks prior to cooking.  The samples from the low inoculated beef subprimals were enriched prior to analysis with the BAX system to determine E. coli O157:H7 positive samples because no colonies were found on plates.

The proportion of surface swabs on steaks from low inoculated subprimals are presented in Figure 6 and stratified according to designated internal cook temperature treatment group.  The data indicate that 35 to 65% of surface samples were positive (after enrichment) for E. coli O157:H7 after 28 days of storage in vacuum packaging.  Surface swabs taken from these steaks after cooking produced no E. coli O157:H7 positive results after enrichment and BAX system analysis (data not presented in tabular or graphic form).

The proportion of internal steak samples from low inoculated subprimals positive for E. coli O157:H7 after cooking to various internal temperatures and sample enrichment are presented in Figure 7.  Data analysis indicated that only raw steak samples (not cooked; NC) were positive (25% of samples) for E. coli O157:H7.  Moreover, data analysis indicated the internal portion of steaks cooked to an internal temperature of 55, 60, 65, 70 or 75°C from low inoculated subprimals were devoid of E. coli O157:H7 after samples were plated, as well as enriched and analyzed with the BAX system. 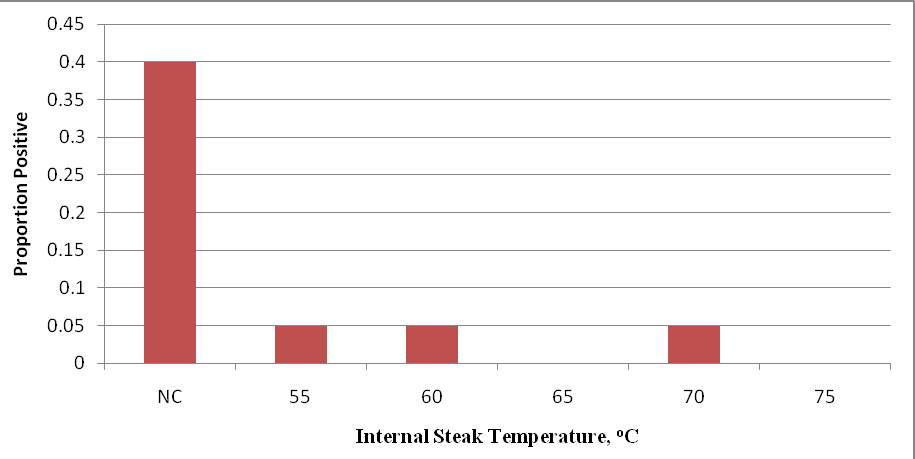 Figure 5. Proportion of internal steak samples positive for E. coli O157:H7 inoculated steaks after 28 days of storage under refrigerated conditions. Beef strip loins were inoculated on day 0 with 105 log CFU/cm2 of E. coli O157:H7 and treated by means of mechanical needle tenderization and cut into steaks on day 21. For each temperature, individual steaks (n=20) were analyzed and meat samples (25 g) taken after cooking (meat samples analyzed with BAX system after cooking to various internal steak temperatures).

Figure 7. Proportion of internal steak samples positive for E. coli O157:H7 inoculated steaks after 28 days of storage under refrigerated conditions. Beef strip loins were inoculated on day 0 with 103 log CFU/cm2 of E. coli O157:H7 and treated by means of mechanical needle tenderization and cut into steaks on day 21. For each temperature, individual steaks (n=20) were analyzed and meat samples taken after cooking (meat samples analyzed with BAX system after cooking to various internal steak temperatures).