Campylobacter spp. are estimated to be a leading bacterial cause of human foodborne illness in the United States, causing >1.9 million illnesses at a cost of $1,215,300,000 annually.  Associations between cases of human food poisoning and the consumption of beef products and findings of high carriage rates of Campyloacter jejuni within the gastrointestinal tract of cattle are being reported.  Incidence of C. jejuni has been reported to be higher in feedlot cattle than pastured cattle and prevalence rates increased in fed cattle from 1.6% near or upon entry to the feedlot to 63% near the end of the finishing period.  This latter finding was attributed to an epidemiological spread of the organism from a few colonized animals to many within the more densely populated rearing conditions within the feedlot; however, other factors such as diet or animal husbandry practices could also contribute to this increase.  Results from a recently completed project investigating tannin extracts as a possible feed additive to reduce E. coli O157:H7 carriage in fed cattle found that steers fed diets supplemented with tannin extracts shed approximately 10 to 100-fold more Campylobacter within their feces then before initiation of the tannin feeding or than in unsupplemented control steers.  Considering that tannins are recognized for their ability to protect dietary protein from ruminal degradation and that Campylobacter do not ferment sugars but rather conserve energy largely via catabolism of amino acids, we hypothesized but have not yet proven that the tannin treatments may have increased intestinal availability of amino acid substrates which may have enhanced growth of this organism.

The practical question resulting from this hypothesis is do diets supplemented with undegradable protein sources intended to deliver more amino acids for intestinal absorption unintentionally promote increased intestinal growth and subsequent shedding of amino acid-utilizing Campylobacter?  Likewise, ionophores like monensin and lasalocid are often supplemented to ruminant diets to protect proteins from being catabolized by obligate amino acid-fermenting bacteria that play a major role in ruminal amino acid degradation.  Could the inhibition of these competing amino acid-utilizing bacteria by ionophores allow Campylobacter unrestricted growth in the lower gut?

The primary objectives of this study were to determine if the common industry practices of feeding undegradable intake protein and supplemental monensin may contribute to the increased carriage and shedding of Campylobacter in feedlot cattle.  Regardless of whether rumen undegradable intake protein or ionophores contribute to Campylobacter carriage in cattle, interventions designed to rid these pathogens before slaughter ultimately can help insure the microbial safety of beef produced for human consumption.  Thus, additional objectives of the present study were to a) determine minimum inhibitory concentrations of two potential anti-Campylobacter compounds, thymol and diphenyliodonium chloride (DIC), needed to achieve efficacious reductions of C. jejuni in vitro and b) test the efficacy of these compounds at 1X and 3X their minimum efficacious dose in fed cattle.

Three feeding studies were conducted to assess the effects of feeding rumen undegradable intake protein and ionophores on Campylobacter carriage and shedding in fed cattle.  In the first experiment, 10 ruminally and duodenally cannulated Angus steers, were adapted to diets formulated to achieve 0 or 30% dried distiller′s grains with solubles.  After the steers were adapted to the 30% distillers grain diet, both the control and 30% distillers grain-adapted steers were then fed their respective diets with the addition of lasalocid. The steers were fed lasalocid for 7 days and then fed their diets without lasalocid for an additional 7 days to see what happened to Campylobacter levels once lasalocid was withdrawn.  In an follow up study, 24 crossbred steers randomly adapted to diets formulated to achieve 0, 30 or 60% wet corn distiller′s grains with soluble.  The steers were adapted to their diets via incremental increases (every 3 d) to diets containing 15, 30, 45 or 60% WDGS.  In a third study; 9 yearling heifers were randomly allocated to a control (n = 4) or a single monensin (n = 5) treatment, the later given orally via a gelatin capsule containing an amount equivalent to 40 g per ton of dry matter intake (assuming intake at 2.5% of body weight).  In a final study, we assessed the effectiveness of 2 potential anti-Campylobacter compounds in laboratory settings and then followed these experiments up with an animal study.   Because recent research results had indicated that the inhibitors would be extensively absorbed or degraded during passage through the gut if administered orally, they were administered in this study using an experimental rectal palpation procedure.

Results from this study demonstrated that the anti-Campylobacter compounds exerted significant bacteria-killing activity in the laboratory but revealed that extensive absorption and degradation of the test compounds may indeed have occurred even with the rectal palpation procedure, thus clearly indicating that additional research is needed to develop anti-Campylobacter interventions for cattle.  Results from our feeding studies demonstrate that the common industry practices of feeding diets increased intestinal carriage or shedding of Campylobacter spp. in fed cattle.

Results from the present study now provide strong evidence that the common industry practices of feeding diets high in rumen undegradable intake protein or supplemented with ionophores do not contribute to increased intestinal carriage or shedding of Campylobacter spp. in fed cattle.  These results will allow feeders to continue to use these dietary practices.  Campylobacter carriage in beef cattle will continue to present food safety risks to the industry and further research is warranted to develop feeding strategies and interventions to reduce these risks.  Results from our studies testing the potential anti-Campylobacter compounds thymol and DIC reveal that more research with additional or modified inhibitors will be needed in order to develop worthwhile interventions. 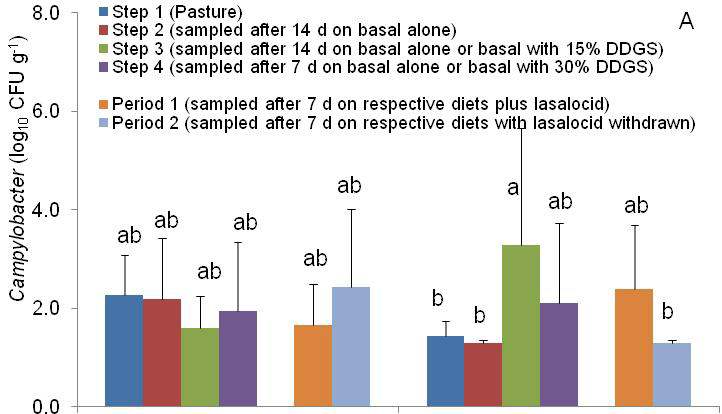 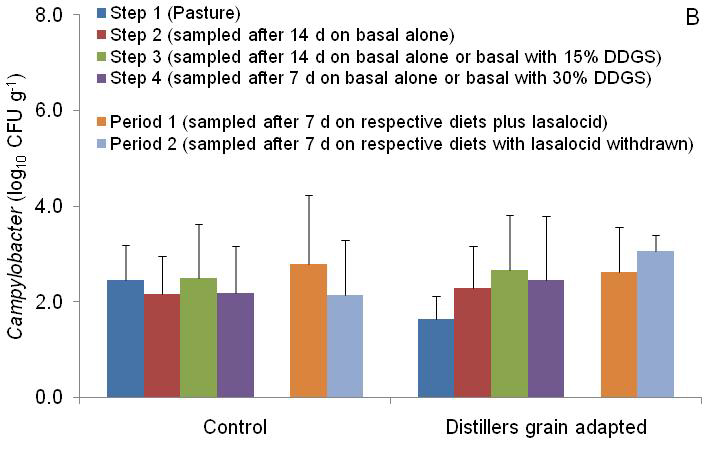 Figure 1. Effect of stepwise adaptation to 30% distillers dried grains with solubles (DDGS) and lasalocid supplementation on Campylobacter carriage and shedding in fed steers. Results show that while variability in Campylobacter counts was observed, there was no significant difference between control and distillers grain fed steers. 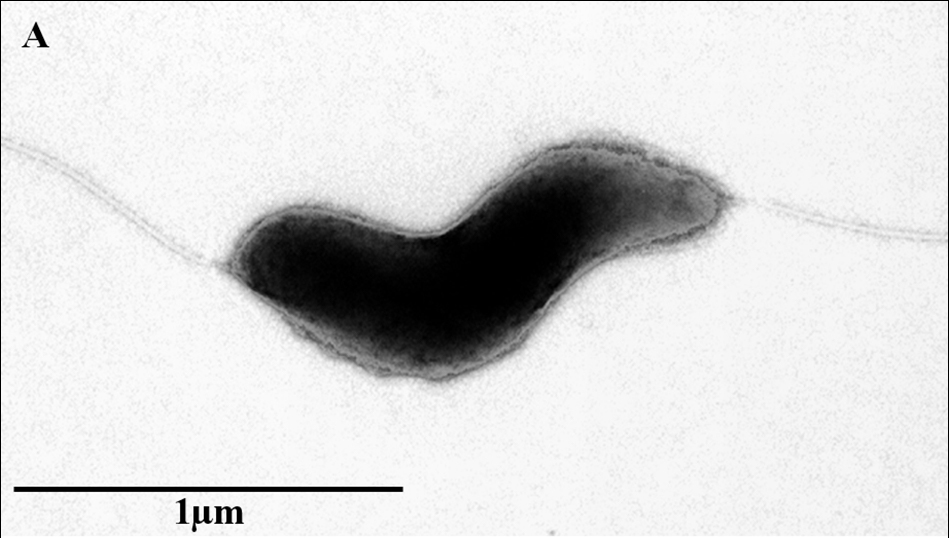 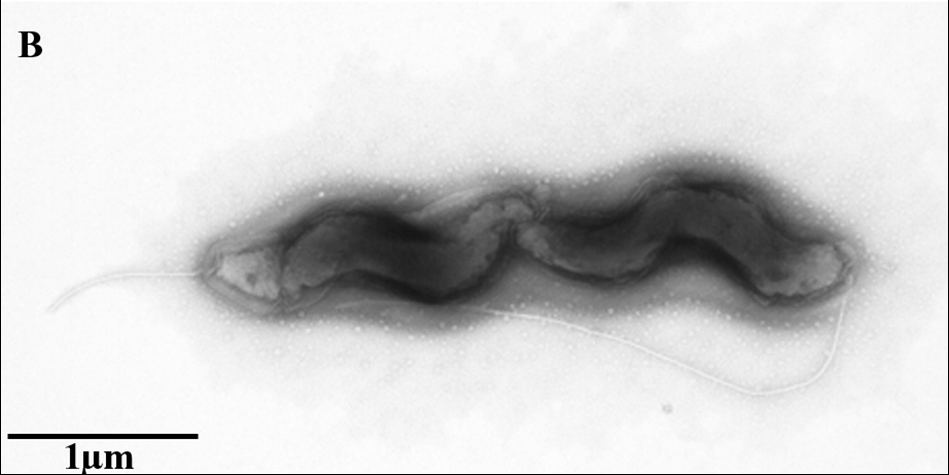 Figure 2. Transmission electron micrographs of negatively stained Campylobacter coli. A) Single organism displaying flagella protruding from both polar ends of the organism. B) A pair of organisms which depict the “classic flying M formation” seen in light microscopic preparations of live campy cultures. Both micrographs show the corkscrew nature of Campylobacter.