E. coli O157 is an important cause of human illness and occasionally death. The populations particularly vulnerable to this pathogen are the young and elderly. Since the mid 1990s, informed regulatory oversight and industry implementation of Pathogen Reduction/HACCP plans have greatly reduced the human burden of this pathogen. In 2010, the incidence of E. coli O157:H7 illnesses was 1.0 case per 100,000 people; this incidence achieved the U.S. government’s Health People 2010 goal and represented a 50% reduction from baseline years. However, illnesses that result from contaminated beef still occasionally occur and there is growing interest in pre-harvest interventions as a tool to help further control this pathogen. Vaccines are one particular intervention that have shown promise.

The objective of this study was to determine the impact of a whole herd vaccination program on the prevalence of E. coli O157.

Four regionally collocated, single-owner feedlots were enrolled and allocated to either whole-herd vaccination (n=2) or not (n=2). All animals within the two vaccinate feedlots that were on-feed during the evaluation period, July through October, were administered a one 2-mL dose of a commercially available E. coli O157 bacterial extract vaccine. This resulted in approximately 201,600 animals administered the candidate vaccine. Twenty fecal samples were collected from 10 pens per feedlot on two occasions, once prior to in-plant sample collection and once after in-plant collection had occurred; this resulted in a total of 1,600 fecal samples. Cattle were shipped to a single abattoir at which time hide swabs were collected. Hide swabs, 1,000 cm2 over the dorsal midline, were collected from 20 animals per pen from five pens of vaccinate and five pens of non-vaccinate cattle on seven production days; this resulted in a total of 1,400 hide swabs. Fecal and hide-swab samples were assayed using bacterial culture and isolation techniques.

We detected a beneficial association of the vaccine with reduced prevalence of E. coli O157 in feces and on the hides of animals presented for harvest. However, these associations varied across sample collection times. Fecal prevalence in July was reduced compared to controls but we did not detect a difference among those samples collected in October. Of the seven production days, hide prevalence was significantly reduced on 3 days and an inverse relationship was detected on one day. Averaged across time, hide prevalence was reduced 50% among vaccinates relative to controls.

Whole-herd vaccination was associated with some measurable improvements in prevalence of E. coli O157. While these data are promising and may indicate vaccination may serve as an intervention in a trans-sector approach to control E. coli O157, additional data or models are needed to better understand to what extent such an approach might improve public health as well as to quantify potential costs and benefits of use. 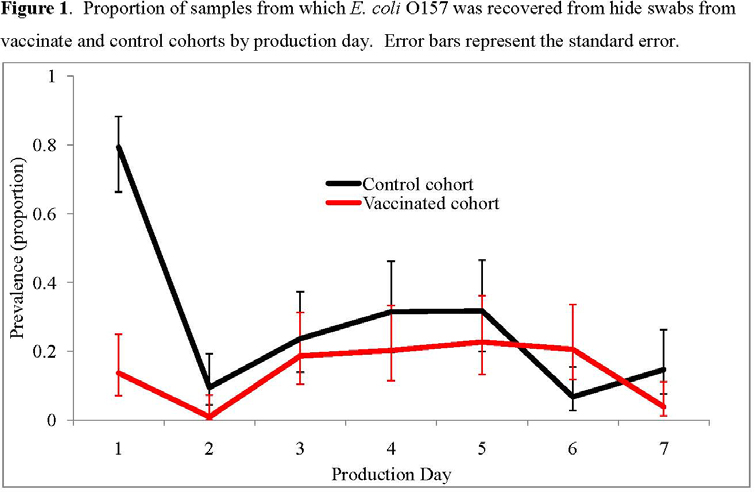