Food safety continues to be a major focus of the meat industry, and the pressure being placed on establishments by the United States Department of Agriculture’s Food Safety and Inspection Service (USDA‐FSIS) to support their food safety decisions has increased tremendously. Ensuring safe beef products for the consumer is the ultimate goal of any processor, and establishments have designed and implemented food safety systems to address specific pathogens of concern.  Further processing establishments often use boxed, vacuum packaged subprimals to produce tenderized beef steaks and roasts.  Although previous research has shown that the prevalence is low (2), there is a possibility that the exterior surfaces of the subprimals could be contaminated with Escherichia coli O157:H7.  Therefore, this project investigated the potential of translocation of E. coli O157:H7 from one area on the surface to another area on the surface of chilled, vacuum‐packaged beef subprimals, and the use of water wash and surface trimming to decontaminate subprimals that could be used to make non‐intact products.

Beef subprimals (n = 192) were obtained at a major beef processor and were fabricated to generally comply with Institutional Meat Purchase Specifications (IMPS) as described by North American Meat Processors Association (4).  Boxed subprimals were shipped commercially via refrigerated truck to the Rosenthal Meat Science and Technology Center at Texas A&M University in College Station, TX.  Vacuum packaged, Beef Loin, Top Sirloin Butt, Boneless (IMPS 184) and Beef Loin, Top Sirloin Butt, Center Cut, Boneless, Cap‐off (IMPS 184B) were obtained for this project because they are the primary beef subprimals used in non‐intact applications in the food service industry.  In addition, they allow for the evaluation of both an original exterior carcass surface when the cap muscle (m. gluteobiceps) is still attached and a lean surface when the cap muscle is removed.  Top sirloin butts were inoculated with one of two levels of E. coli O157:H7 — approximately 102 to 103 CFU/cm2 (low inoculum) or 104 to 105 CFU/cm2 (high inoculum).

These two inoculum levels represent a minimum inoculum level that could be applied consistently, and a higher level, greater than typically found on subprimals, that would allow tracking of reductions in microbial numbers using the water wash and trimming decontamination methods. A 100‐cm2 area of each top sirloin butt was inoculated in order to achieve the desired initial concentration on each subprimal surface region.  Following inoculation, the subprimals were vacuum packaged and stored under refrigeration [2°C] for either 0, 14 or 28 days.  Upon opening, samples were taken from the vacuum package, purge, inoculated surface area, a site adjacent to the inoculated surface area, and the opposite side from the inoculated area in order to evaluate initial contamination levels.  The subprimals then were assigned to one of four treatments:

A total of 1,824 samples for microbiological analysis were collected.  Samples were obtained by excising two 10‐cm2 X  2 mm in depth using a sterile stainless‐steel borer, scalpel, and forceps, and compositing them (20‐cm2 total area).  Each composite sample was placed in sterile stomacher bags and 99 ml of 0.1% peptone was added.  The samples then were pummeled for 1 min at 260 rpm using a Stomacher‐400 (Tekmar Company, Cincinnati, OH). For each sample, counts were determined by plating appropriate decimal dilutions on prepoured and dried rifampicin‐tryptic soy agar (rif‐TSA, Difco, Spark, MD) plates with a sterile bent glass rod. Plates were incubated 24 h at 35­C. Colonies were counted, recorded, and reported as log CFU/cm2.

For both high and low inoculated top sirloin butts, contamination of other subprimal surfaces was found after vacuum packaging.  Even though the initial counts observed were influenced by day and cap effects, from a practical standpoint, processors should understand that surface contamination may spread from one location to another in vacuum packaged products. Of the treatments used in this study, water washing was the least effective for both high and low inoculated subprimals.  Full trimming, with or without a water wash treatment, proved to be the most effective treatment used in this study.  Although partial trimming did have comparable levels of E. coli O157:H7 on the inoculated side, the counts observed on the opposite side were significantly higher than those found on the fully trimmed subprimals.  However, the more reasonable level of contamination found in the low inoculated top sirloin butts revealed no significant differences between full trimming and partial trimming, with or without a water wash treatment.  Nevertheless, a trimming treatment, whether full or partial, effectively reduced the contamination occurring on top sirloin butts.

Due to the increased number of positive test results and illnesses associated with E. coli O157:H7 from beef in recent years, the majority of attention from USDA-FSIS and the industry has focused on the production of trimmings, ground beef, and non‐intact beef products (1, 3). Each time there is a recall or a foodborne illness outbreak, the meat industry is questioned and often criticized by both consumers and USDA‐FSIS.  Therefore, industry food safety practices, specifically those for E. coli O157:H7, are under increased scrutiny.  E. coli O157:H7 is a major food safety concern for the beef industry.  Processors of non‐intact beef products must consider the potential hazards that may occur in this process and properly address these concerns in their food safety program.  These data can be used by further‐processing establishments to support their food safety programs. 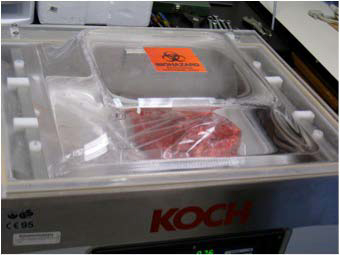 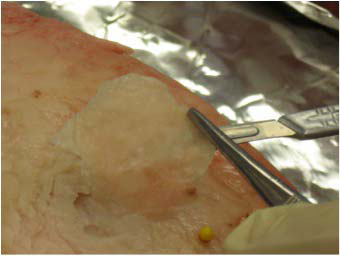 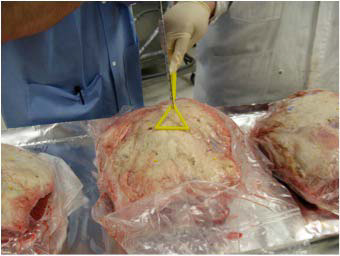 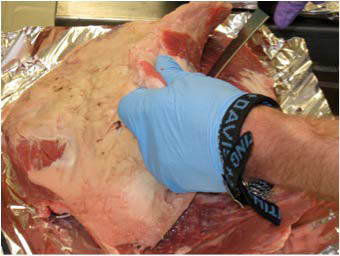 Figure 4. Trimming the exterior surface of the top sirloin butt.

A High inoculum level = approximately 4.8log10CFU/cm2
B Inoculation site was 100-cm2 area on the dorsal surface. Adjacent site was an area on the dorsal surface   adjacent to the inoculation site. The opposite side was the ventral side.
C Top sirloin butts were stored under refrigeration [2°C] for either 0, 14, or 28 days.
D Numbers with different letters significantly differ (p<0.05)

A Low inoculum level = approximately 2.5log10CFU/cm2
B Inoculation site was 100-cm2 area on the dorsal surface. Adjacent site was an area on the dorsal surface adjacent to the inoculation site. The opposite side was the ventral side.
C Top sirloin butts were stored under refrigeration [2°C] for either 0, 14, or 28 days.
D Numbers with different letters significantly differ (p<0.05)