Evaluation of Gallium Maltolate on Fecal Shedding of Salmonella in Cattle

Foodborne illness is a major cause of morbidity and mortality in the United States. Salmonella enterica is the second leading cause of foodborne illness and causes an estimated 1.4 million cases of gastroenteritis every year.  The economic impact of salmonellosis is substantial, with an estimated annual cost of over $3.5 billion due to loss of work, medical care, and life. Salmonellosis is frequently attributed to the consumption of contaminated food products, such as poultry, beef, pork, and eggs.  Cattle are a frequent reservoir for Salmonella, and novel strategies aimed at minimizing shedding of Salmonella are important for reducing the incidence of foodborne illness.  Iron withholding is an essential antimicrobial component of the innate immune system. Iron-binding proteins (particularly transferrin and lactoferrin) bind virtually all free iron in mammalian cells and tissues, thereby rendering iron unavailable to most microorganisms.  Some pathogenic bacteria, however, can acquire iron directly from these iron-binding proteins.  A variety of preventative and therapeutic strategies for bacterial infections have been developed that act by interfering with microbial iron acquisition and utilization.  Gallium is a semi-metal that accumulates in inflamed tissue, macrophages, neutrophils, and in some bacteria.  The antimicrobial effects of gallium are related to its ability to be a non-functional iron mimic. Bacteria acquire gallium, instead of iron, and incorporate it into metabolic pathways and enzymes that require iron.  Many of these enzymes are critical for survival of the bacteria.  The net result is inhibition of bacterial replication, and ultimately bacterial death. Recent publications have shown gallium to exhibit bactericidal activity in vitro and in vivo against numerous pathogenic bacteria.  Preliminary research conducted in our laboratory demonstrated that gallium maltolate, a complex of gallium and maltol with high bioavailability, significantly inhibits growth of Salmonella enterica serovar Newport in pure culture and in mixed ruminal fluid cultures.

The objective of the study was to determine whether oral administration of gallium maltolate (GaM) would significantly reduce the numbers of Salmonella shed in the feces of cattle.

At the time treatment was initiated, cattle were placed in individual pens and remained there for the duration of the study. Control animals were administered an empty bolus and treatment animals were administered a bolus containing either 6.5 g of GaM, or 13 g of GaM. Fecal samples were obtained every 12 h and processed for qualitative and quantitative analysis of Salmonella.  Sixty h following the initiation of treatment, animals from both groups were humanely euthanized.  Luminal contents and tissue were harvested from the rumen, jejunum, spiral colon, cecum, and rectum.  The luminal contents were processed as described above for quantitative and qualitative analysis of the challenge strains of Salmonella, and tissue samples were enriched and plated for qualitative analysis of the challenge strains of Salmonella.

The objective of this study was to determine whether oral administration of GaM would reduce fecal shedding of Salmonella in cattle over time.  Based on preliminary data demonstrating that in vitro growth of S. newport was significantly reduced in media or rumen fluid containing GaM at concentrations of 250 μM and 500 μM, we used two doses of GaM designed to achieve 250 μM and 500 μM GaM in the rumen. To ensure sufficient fecal shedding of Salmonella, we challenged the steers with a cocktail of S. newport and S. montevideo.

We experienced a number of challenges during the execution of this study. In particular, we found that fecal shedding in group 1 appeared to be intermittent, with levels of quantifiable Salmonella falling below the limit of detection at some time points, and then rising again at others.  We attributed this to the length of time between experimental infection and initiation of treatment, as all animals were consistently shedding quantifiable levels of Salmonella for 48 h. Thus, for group two we initiated treatment 24 h following experimental infection (rather than 60 h following experimental infection, as we did for group one), and subsequently analyzed the data separately from group one.  Steers from that group shed quantifiable levels of Salmonella in their feces throughout the duration of the study. We found no significant differences in fecal shedding between control animals and treated animals in either group 1 (Figure 1) or in group 2 (Figure 2).  Similarly, no significant differences were observed when comparing levels of Salmonella in luminal contents from control and treated steers or in the frequency of qualitative positive results of luminal contents or tissue samples.

At the present time, the results of this study do not support the use of GaM to reduce fecal shedding of Salmonella in cattle.  However, these negative findings should be interpreted with caution due to limited statistical power. 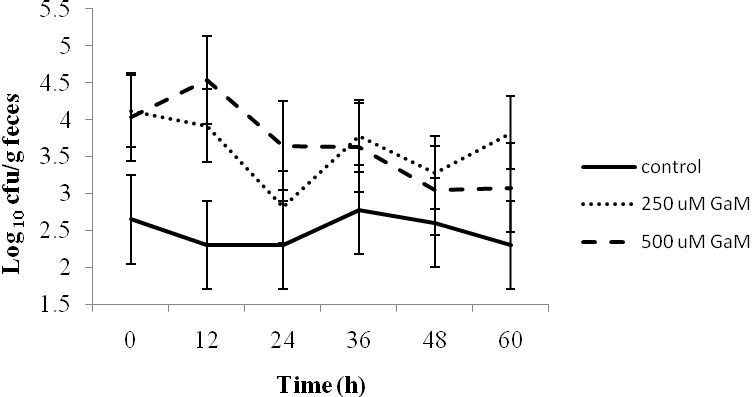 Figure 1. Effect of GaM over time on fecal shedding of Salmonella (serovars Newport and Montevideo) in steers from group 1. 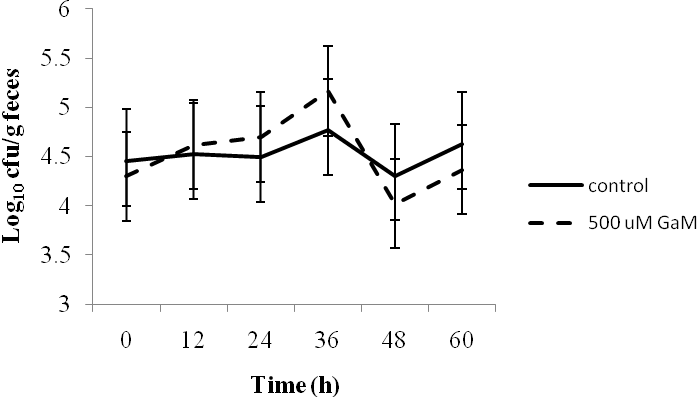 Figure 2. Effect of GaM over time on fecal shedding of Salmonella (serovars Newport and Montevideo) in steers from group 2.