The Impact of Carcass Surface Trimming During the Fabrication of Subprimals on the Resultant Escherichia coli O157:H7 Contamination Level

One area that has received a great deal of attention relates to E. coli O157:H7 contamination of products intended for the production of non-intact beef products.  USDA-FSIS has questioned the ability of further processors to support the fact that E.  coli O157:H7 is not a reasonably likely to occur food safety hazard on the trimmed subprimals that are often used to produce these non-intact products. Previous research (Kennedy, Williams, Brown, & Minerich, 2006) found that the prevalence of E. coli O157:H7 on subprimals was extremely low.  However, FSIS has questioned the use of these data to support that E. coli O157:H7 is not reasonably likely to occur because these data were collected in 2004, which was a year with a low prevalence for E. coli O157:H7 in ground beef.

It has been theorized that trimming during the fabrication process would reduce E. coli O157:H7; however, this has not been supported by peer-reviewed research.  We propose to conduct a study to determine the effectiveness of trimming original carcass surfaces during fabrication of subprimals on the reduction of E. coli O157:H7.

The objective of this study was to use surrogate microorganisms as a model to evaluate the impact of trimming exterior carcass surfaces during the fabrication of subprimals in order to reduce E. coli O157:H7 contamination.

Five cattle were used in this study.  Carcass sides were inoculated before entering the blast chill with a gelatin slurry containing a bacterial cocktail of three rifampicin‐resistant, nonpathogenic E. coli Biotype I strains.  Following a 48‐h chill, sides were fabricated individually to produce eight subprimals (brisket, chuck, clod, rib, bottom round, top sirloin, short loin, and inside round).  Samples were taken from the exterior carcass fat surface, initial lean surface area, trimmed fat surface area (where applicable), and trimmed fat surface area (where applicable). Environmental samples were taken on the harvest floor, in the hot box, and the processing room.

This research showed that for eight different subprimals generated from carcasses that had been inoculated with rifampicin‐resistant surrogates counts were numerically highest on the exterior carcass fat surface samples. It also showed that trimmed lean samples typically had the lowest numerical counts of all samples taken from each subprimal. 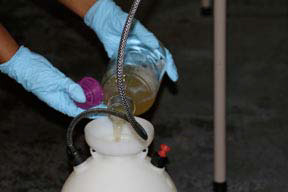 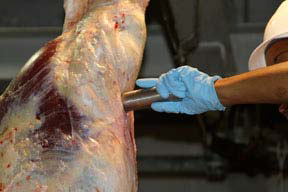 Figure 2. Use of border to mark the sample site on the round prior excision. 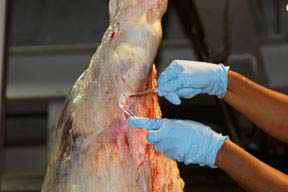 Figure 3. Aseptic removal of exision sample from the round.