Orange Pulp and Peel as Feedstuffs to Reduce E. coli O157:H7 and Salmonella Populations in Ruminants

Foodborne pathogenic bacteria such as E. coli O157:H7 and Salmonella are threats to the safety of beef, and are publically perceived as “hamburger diseases”.  These pathogens are found in the gut of cattle where they can live undetected in both beef and dairy cattle.  Each year, EHEC and Salmonella spp. infections cause more than 1.6 million illnesses at a cost to the U.S. economy of more than $15.6 billion.  Foodborne pathogenic bacteria can be introduced into the abattoir in the feces of cattle or attached to their hide, providing a direct route into the food chain.

Because of the economic, public health and market share impact of these pathogens, several intervention strategies have been implemented in cattle processing plants to decrease bacterial contamination on carcasses.  However, these are not perfect.  Therefore pre-harvest intervention strategies that reduce pathogens in the live animal have been devised and investigated.  Not only do pre-harvest pathogen reduction strategies reduce pathogen load entering the processing plant, but they also reduce the pathogen burden in the environment which has led to several high profile human outbreaks that were linked to cattle manure (e.g., lettuce outbreak in California).

Fresh citrus peel and dried orange pulp are by-products from citrus juice production that have a relatively high nutritive value (high TDN).  Orange peel and pulp is available at low prices in citrus-producing regions and is often incorporated into least cost ration formulations for beef and dairy cattle.  Orange peel and pulp and other citrus fruits contain essential oils (e.g., limonene) that are toxic to bacteria and exhibit antioxidant effects in host animals.  Because of the natural antimicrobial effects of orange peel/pulp, it has been proposed for use as a low-cost feed ingredient that could be used to decrease foodborne pathogenic bacteria populations in cattle.  Previously, we demonstrated that orange peel and pulp reduced populations of E. coli O157:H7 and Salmonella in mixed ruminal fluid fermentations in test tube conditions and reduced.

The objective of this study was to determine if feeding dried orange peel pellets to sheep (as a model ruminant) killed Salmonella and E. coli O157:H7 in the gastrointestinal tract.

In both studies fecal shedding of Salmonella was measured daily for 5 d before animals were humanely sacrificed.   Digesta samples were collected from the rumen, cecum and rectum of the sheep.  Samples were diluted and plated on agar plates supplemented with antibiotics to detect the inoculated strains of Salmonella and E. coli O157:H7.

Sheep did not consume orange peel at levels >10% of their diet, likely due to palatability concerns, so effects of feeding the 20% Orange peel to sheep in the first study were not detected.  However, feeding 10% orange peel in the ration reduced ruminal, cecal and rectal populations of Salmonella Typhimurium approximately 1, 2 and 0.5 log10 CFU (P < 0.08, < 0.06, < 0.10), respectively (Figure 1). 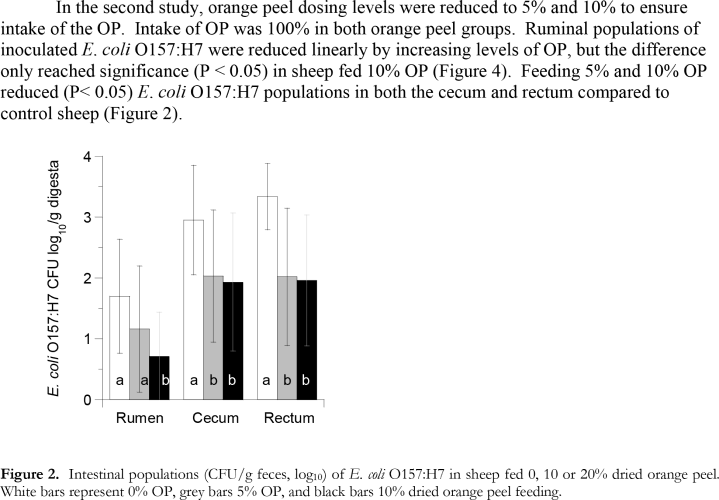 Collectively, our results indicate that orange peel and pulp can be used to reduce foodborne pathogens in live animals.  Further research is needed to determine the most efficacious feeding and treatment regimen to maximize the pathogen reducing effect.  This information can be applied to the United States Beef industry directly as a pathogen reduction strategy that can be utilized today, ensuring the safety and wholesomeness of our beef supply.

Feeding orange peel and pulp in cattle rations reduced E. coli O157:H7 and Salmonella throughout the gastrointestinal tract of sheep used as a model ruminant.  Salmonella and E. coli O157:H7 are pathogenic foodborne bacteria that have been significant impactors on the perception of the wholesomeness and safety of beef.  By finding ways to reduce the levels of these critical pathogens in cattle, then we can improve beef safety and reduce the environmental impact of these pathogens in the waste stream.  The use of a “green” by-product from juice production to reduce pathogens in cattle is potentially impactful, both from a practical and a public relations standpoint.