Evaluating the Efficacy of a Number of Compounds to Reduce E. coli O157 Load on Hides as to Pattern Lines Just Prior to Dressing

For whatever the reason the levels of E. coli O157 have remained high.  There are plenty of data that shows the efficacy of hide interventions in reducing the E. coli O157 load on hides as well as in the resultant trim.  However, for variety of reasons the vast majority of the plants are unable to include a hide wash cabinet in their food safety systems.  The challenge is to come up with an effective system that reduces the transfer of E. coli O157 during dressing.  The objective of this proposal is to evaluate the efficacy of a number of compounds that have shown to be efficacious toward hide E. coli O157 when used in the plant on the pattern lines prior to dressing.

The objective of this study was to evaluate the efficacy of, Acetic acid, Lactic Acid, Bromitize and hot water as applied to pattern lines to reduce the E. coli O157:H7 load. 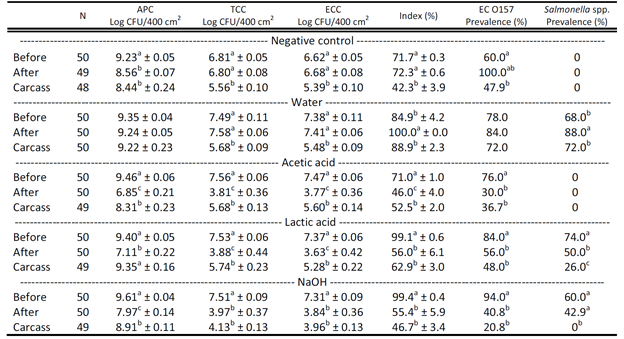 It is now clearly shown that hide is the major source of E. coli O157 in the red meat supply.  Similarly, it is clearly established that hide intervention is perhaps the most effective intervention to control E. coli O157.  However, very few percentages of the U.S. beef processing plants have hide wash interventions or have the capability to install a hide wash system.  Since dressing is the most significant that determines how much of the hides bacteria is transferred onto the carcass, any effective intervention that reduces the hide load regardless of the location of application should reduce the level of E. coli O157 that is transferred from hide onto the carcass and eventually the prevalence in raw ground beef materials.  In this project we evaluated the efficacy of a number common and proven antimicrobial as applied to pattern lines to reduce the level of E. coli O157:H7 and Salmonella on beef carcass after hide removal.  These results provide the beef processing companies that for whatever reason cannot use an automated hide wash system an alternative and effective hide intervention procedure.  One more hurdle in the multi-hurdle food safety system.