A Survey of Campylobacter in Beef Cuts at Retail

Campylobacter jejuni is one of the most common causes of bacterial diarrheal illness in the United States (CDC). According to the U.S. Food and Drug Administration, research has shown that 20 to 100% of retail chickens are contaminated with the organism (FDA).  It is assumed these high numbers are because many healthy chickens carry Campylobacter in their intestinal tract (Franco, Williams, 2001).  However, Campylobacter is often carried by healthy cattle as well; little research is currently available to determine the prevalence of Campylobacter in beef products that are available in U.S. supermarkets.  Therefore, it is important for us to establish a baseline for Campylobacter jejuni prevalence within the United States in order to better understand the prevalence of this organism and ultimately prevent food-borne illness from beef products available at supermarkets.

Sample collection
Ground beef samples were purchased (n = approximately 20 per store) from differing lean/fat composition (96/4, 93/7, 92/8, 90/10, 85/15, 80/20, 73/27) to insure that all samples did not originate from the same grind; and to obtain equal representation of the three different packaging types (MAP, PVC, Chub, Laminate).  Whole muscle cut samples consisted of round (top, bottom, and inside) and strip loin steaks (n = 3 per store).  Sample collection occurred during the months of February through May.  All samples were individually labeled and shipped to Texas Tech University, Lubbock, TX in insulated coolers.  Samples were weighed upon arrival.  Each sample was aseptically opened using a knife sanitized in 95% ethanol and flamed prior to sample collection using a sterile metal spatula. Aliquots of ground beef were taken randomly from five locations in the package (all four corners and from the middle) to adequately represent the package. Approximately 25 g of total sample was placed into Whirl pack bags (Nasco Ft. Atkinson, WI) which were sealed.  Samples were then transported to the Experimental Science Building (Texas Tech University, Lubbock, TX) and stored at 4°C in a laboratory cooler.  Whole muscle samples remained inside the original packaging and were stored under the same conditions. 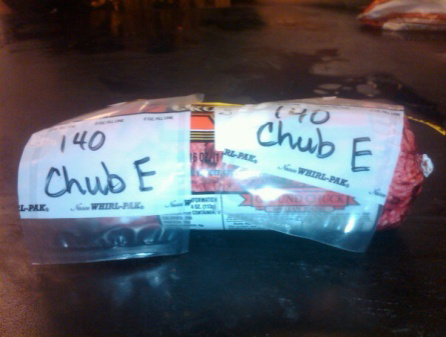 Sample preparation
The 25 g ground beef samples were taken from the Whirl pack bags (Nasco Ft. Atkinson, WI) and placed into stomacher bags.  A 200 mL portion of Bolton selective broth (a selective media designed for Campylobacter) was added to the bag and samples were stomached for 2 min at 230 RPM using a stomacher.  Whole muscle cuts were placed into Ziploc®bags with 90 mL of Buffered Peptone Water (BPW).  A whole muscle rinse was preformed while samples were manually shaken for 2 min.  The whole muscle cut was removed with sterile utensils and 100 mL of double strength Bolton selective broth was added to the bag.  The content of the bags (approximately 160 mL) for ground beef and whole muscle cut samples was then placed into screw-top bottles (PYREX® 160mL milk dilution bottles, Corning Incorporated Life Sciences Lowell MA) to provide the microaerophilic environment that is needed to grow Campylobacter (Nachamkin, 2007).  The bottles were placed in racks and incubated for 4 h at 37°C and then for another 20 h at 42°C. 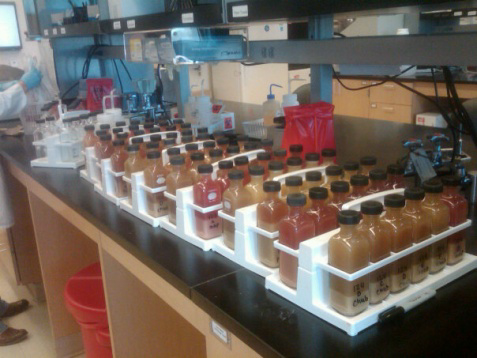 Plating and agglutination
After the 24 h incubation period the screw-top bottles were removed from the incubator and prepared for plating.  The bottles were shaken well and 100 μl was pipetted onto Campylobacter selective agar called blood-free campylobacter plates more commonly known as MCCDA.  Spread plating techniques were used to cover the plates.  Blood-free Campylobacter selective agar was also used to make the plates for the plating of samples.  Plates were placed into anaerobic chambers with Campylobacter gas packs (Oxoid Ltd. Company or BD E2) and were originally incubated at 37ºC, however, after initial samples were incubated it was apparent that optimal growth was not being achieved, therefore incubation temperature was increased to 42°C for 48 h.  After incubation the plates were checked for growth, and plates with growth were agglutinated.  A Campylobacter latex agglutination kit (L-CAM01T, Scimdex Corporation Denville, NJ) was used to determine positive colonies.  Campylobacter antibodies are bound to the latex in the kit and form a ring on the kit plate, this visual agglutination is used to determine if the colonies are Campylobacter.  A total of ten samples were tested at a time with a positive and negative control.  The negative control contained all of the reagents but does not contain a bacterial specimen and the positive control contains only the positive reagent and the latex.  All data is presented as the percentage of positive samples. 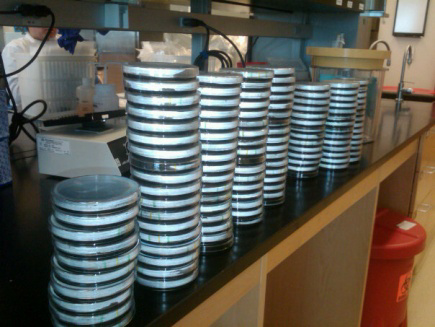 To evaluate the presence of Campylobacter in ground beef samples of varied package type, two relationships were derived: the percentage of positive samples among all package types and the percentage of positive samples within each package type.  Among the 1,109 ground beef samples testing positive (n = 70) for Campylobacter, 1.89, 1.98, 2.34, 0.09% were attributed to MAP, chub, PVC and laminate packaging (Figure 3).  Within each packaging category, 5.92, 7.28, 5.83 and 16.66% of MAP, chub, PVC and laminate samples, respectively, were positive for Campylobacter (Figure 4).  It should be noted that the sample size for laminate packaging was small (n = 6) due to limited retail availability.

Although there is still much work to be done in order to have a more complete understanding of Campylobacter and its role as a food-borne pathogen, based on the results from this study Campylobacter is present in ground and whole muscle beef products as well as all packaging types available at the supermarket level.  Further research would allow for a greater understanding of where and why contamination is occurring.