Evaluation of the Appropriateness of Previously Developed Escherichia coli Biotype I Surrogates as Predictors of Non-O157 Shiga-toxin Producing E. coli (STECs) in Beef

Meat and poultry are potential sources of pathogens associated with foodborne illness. The seriousness of the problem was illustrated with the outbreak of foodborne illness in several western states in 1992. The outbreak was attributed to undercooked hamburgers contaminated with E. coli O157:H7 that were served at a fast-food restaurant. This particular outbreak caused hundreds of illnesses and four deaths. Since then, great efforts from the government, industry and academic sectors have been made to reduce E. coli O157:H7 contamination and improve meat safety. Unfortunately, recalls and illnesses continue to be associated with beef products.

Also, there is a growing concern over the risks associated with non-O157 STECs and beef. Incidence of Foodborne caused illnesses due to STECs have increased over the past decade. STECs comprise many pathogenic serotypes of which O157:H7 is the most studied. However, the percentage of non-O157 serotype infections is increasing in many countries. In addition to O157:H7, the CDC has stated that the serotypes most commonly identified in human illness are O26, O45, O103, O111, O121, and O145.

Three E. coli biotype I strains previously isolated from cattle hides and determined to be appropriate for use as surrogates for E. coli O157:H7 based on collaborative studies conducted by Texas A&M University and Iowa State University. Six non-E. coli O157 STECs serotypes identified as O26, O111, O121, O145, O103, and O45 were selected as target pathogens for comparison against the known surrogate bacteria.

The objective of this study was to compare the growth, resistance, and survival properties of non-O157 STECs to those of E. coli biotype I microorganisms previously identified as E. coli O157:H7 surrogates.

Growth characteristics for Esherichia coli serotypes O26, (ATCC 12795), O111 (ATCC 43887), and O103 (ATCC 23982) were compared to previously described E. coli biotype I surrogates (2) to determine if these surrogated can be used for the non-O157 STECs. Each strain was individually cultured in tryptic soy broth (TSB; Becton Dickinson) at 37°C for 18 h. Rifampicin-­resistant surrogates as well as Rifampicin-resistant surrogates as well as rifampicin resistant non-O157 STECs were prepared and used in comparison to the parent organism. Dilutions were made for each culture in 0.1% peptone, and 0.1 ml of the 1:10,000 dilution was transferred to 10 ml fresh TSB to achieve an initial inoculums level of ~3 log CFU/ml. All tubes were incubated at 37°C in a water bath. Enumeration was conducted at h 0, 1, 2, 3, 4, 5, 6, 7, 8, 9, 10, 11, 12, and 24 by plating 10-fold serial dilutions on prepared and dried tryptic soy agar (TSA) plates.

Plates were incubated at 37°C for 24 h, and colonies were enumerated. Each growth curve experiment was performed in three replicates, with a duplicate in each replicate. Growth rate, lag phase, maximum population density and duplication time were calculated. Growth data (log10 CFU/ ml) was plotted as a function of time and growth; parameters were estimated using the MicroFit software. The General Linear Model of SAS was used to identify significant differences in growth parameters.

These data will allow previously identified surrogate microorganisms to be used by the beef industry to conduct in-plant validation studies to determine the efficacy of antimicrobial interventions on both E. coli O157:H7 and non-O157 STECs. These data will also assist the beef industry in fulfilling regulatory expectations because USDA’s Food Safety and Inspection Service requires scientific validation on the interventions and has published draft guidelines for in-plant validations. Overall, these data will help support decisions related to food safety programs in beef slaughter and further processing establishments. 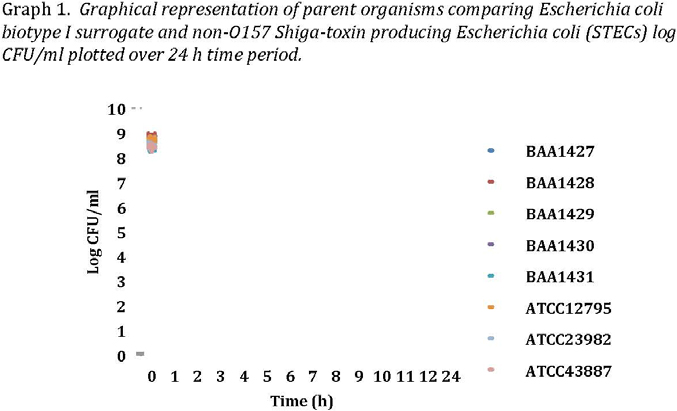