Escherichia coli O157:H7 remains the major foodborne pathogen of concern for the beef industry.  Extensive research has been conducted and is on-going to identify and develop novel intervention strategies to reduce E. coli O157:H7 from live cattle and processed carcasses. Recent work has shown that hides are the main source of beef carcass contamination at slaughter and as such reductions in the prevalence of E. coli O157:H7 on the hide are directly related to lower carcass prevalence rates.  Interventions applied to cattle during production have been designed to reduce hide contamination indirectly through lowering the prevalence and levels of E. coli O157:H7 shed in the feces of cattle.

Emerging technologies to reduce the prevalence of E. coli O157:H7 from cattle before arrival at a harvest facility have proven promising in small scale feedlot studies.  The present study evaluated the efficacy of the Epitopix SRP E. coli O157:H7 vaccine under large scale commercial conditions.  The vaccinated cattle were compared to cattle slaughter during the same timeframe from feedlots in the same general region.  While E. coli O157:H7 was the main target of the vaccine and the main focus of this work, we also analyzed a subset of samples for vaccine effects on non-O157 Shiga toxin-producing E. coli (STEC).  Also, isolates were analyzed for tracking purposes to determine the contribution to hide contamination made by the lairage environment (defined as processing plant holding pen area).

Sampling occured on nine weeks over a ten-week period from June through August.  One or two sample sets were collected per week for a total of thirteen sample shipments.  Samples per shipment ranged from 210 to 375 (ave. 324).  Overall, 4215 were collected and analyzed for E. coli O157:H7.  For the purposes of this report a “lot” refers to all animals received from a feedlot pen. In total, samples were collected from 143 control lots and 138 vaccinate lots.  All vaccinate pens on a slaughter date were sampled and a corresponding number of non-vaccinate pens were then selected and sampled.  For each pen, hide samples were randomly selected throughout the pen as they were processed.

Hide samples were collected from 4215 animals just after entry into a commercial slaughter facility.  E. coli O157:H7 was recovered from 3604 (85.5%) samples (Table 1).  The prevalence of E. coli O157 for control and vaccinate animals was 81.0% and 90.1%, respectively.  With the data from the total samples indicating an equal or higher prevalence and enumeration rate from the vaccinate lots as opposed to the controls, the prevalence data was analyzed by sample shipment (Table 2).  All lots but one (shipment 8) had a higher prevalence for the vaccinate lots than for the control lots.

The high rate of hides positive for E. coli O157:H7 across all lots and the lack of difference between vaccinate and control groups led to the hypothesis that the majority of the hide contamination was not originating in the feedlot, but rather was derived from the lairage environment, a phenomenon observed previously at multiple beef processing plants.  Genetic tracking analysis was used to follow isolates in order to determine if what was found on the animal hides matched what was in fecal samples from the feedlot of origin for those animals.  The analysis showed that the E. coli strains that were most prevalent for fecal isolates were not the most prevalent for hide isolates and frequently particular hide strains could not be found among fecal isolate strains.

Hide contamination has been shown to be the major source of subsequent carcass contamination.  This fact indicates the need for a pre-harvest intervention that is effective in lowering the E. coli O157:H7 load and prevalence on beef cattle hides prior to processing.  The study reported herein was performed in order to provide the beef industry with information regarding efficacy of the Epitopix vaccine in reducing the hide-burden of E. coli O157:H7 of animals presented for harvest.  The hide data presented here is one aspect of a larger vaccine trial that also determined the vaccine efficacy in regard to production of high antibody titer, E. coli O157:H7 prevalence in fecal pats at multiple feedlots, and the prevalence of E. coli O157:H7 in beef trim.

In evaluating the effect of the SRP vaccine in reducing E. coli O157 prevalence associated with feedlot cattle and subsequently in beef trim, the prevalence of E. coli O157:H7 in hide samples did not follow the same trends seen for fecal samples and in beef trim.  The trends for fecal samples and beef trim were to have a lower prevalence of E. coli O157:H7 in the vaccinate samples as compared to the controls.  Our belief is that the opposite trend for hide samples was caused by increases in hide contamination usually seen in the lairage environments at beef processing plants and was independent of the vaccine effects.

Lairage contamination and the potential effects on hide prevalence for E. coli O157:H7 and other STEC were taken into account when developing the experimental design.  It was known that sampling cattle at the feedlot, while desirable for removing any lairage contamination variability, would not be feasible due to cattle stress and bruising issues.  Hence it was determined that the hide samples would be collected at the processing plant.  In order to minimize the effects of lairage contamination, test lots processed on morning shifts would be held in lairage spaces that had been cleaned prior to entry.  While clean pens were thought to be an important part of minimizing the lairage effect, the holding pens are only one of several common spaces in the lairage environment where cattle encounter fecal material from previous lots.  This fact appears to have played a large role in contamination of the cattle after exit from the feedlot and making conclusions regarding the vaccine efficacy toward hide contamination without merit. 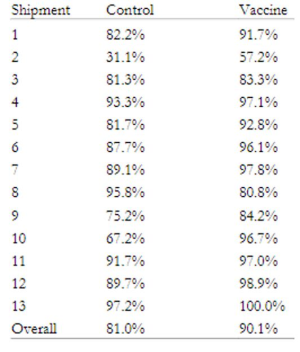