Methods for Effectively Controlling E. coli O157:H7 and Salmonella during the Production of Non-intact Beef Products

Escherichia coli O157:H7 poses a threat to food industries and public heath in the United States. Additional strains ̧ including non-O157 shiga-toxin producing E. coli (STEC), are rapidly becoming microorganisms of concern in fresh meats. Significant interest has been placed on the effectiveness of current microbiological safeguards on the reduction of STECs.

The objectives of this project were to evaluate:

USDA Select strip loins (IMPS #180) were divided into two halves and each half assigned to high inoculation (1×106cfu/cm2) or low inoculation (1×102cfu/cm2) using either an E. coli O157:H7 or non-O157 STEC cocktail. Subprimal halves were immersed in their respective inoculation broth for one min and bacteria allowed to attach for 30 min prior to collection of surface swabs (50 cm2).

After 14 d, lean surface swabs (50 cm2) were obtained from subprimals prior to mechanical tenderization. After tenderization, subprimals were portioned into 2.54-cm steaks. Three steaks from each subprimal were assigned to three targeted internal temperatures: raw (not-cooked); 50°C or 70°C. A 50 cm2 swab was obtained from the lean surface of one steak per subprimal prior to cooking and further processing. Steaks were cooked to their targeted internal temperatures on a clam-shell grill.

Internal temperature was monitored throughout cooking and for five min after removal from grill.  After five min of rest, an internal (core) sample was aseptically obtained from the center of all steaks for analysis of translocation and survivability at the designated cook temperatures.  Swab and core samples were plated on MacConkey’s NT agar (E. coli O157:H7) or POSSE (non-O157 STEC) and incubated at 37°C for 18 to 24 h for enumeration.  If enumeration failed to identify colonies, samples were enriched in Difco-GN broth overnight and subjected to IMS and agglutination (E. coli O157:H7) or analysis with the GeneDisc® system. 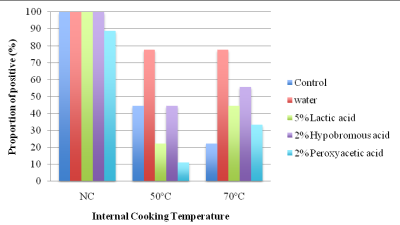