Salmonella continues to be a significant public health burden and is the causative agent of over 1 million cases of foodborne illness each year. As a result of such infections, it is believed that 19,000 hospitalizations and 400 deaths occur annually. Therefore, it is important to focus research efforts on controlling this prominent microorganism in our food supply. It is well known that cattle harbor Salmonella in their gastrointestinal tracts and the microorganism can then be transferred to beef products, including ground beef. Science has proven that cattle feces present on their hides can contaminate the animal and, ultimately, their subsequent meat products. However, Salmonella can also be sequestered within the lymph nodes of cattle. These lymph nodes maybe present in the fat that is incorporated into ground beef. It is for these reasons that research into this issue is necessary if we are to protect our food supply. Needed are approaches to better understand the burden of Salmonella in the lymph nodes of cattle presented for harvest as well as potential mitigation strategies.

In study 1, Subiliac lymph nodes were collected from the carcasses of fed and cull cattle slaughtered at commercial slaughterhouses and analyzed for Salmonella. Lymph nodes were trimmed of all fat and fascia before being surface sterilized in boiling water for 3 seconds. They were then smashed with a rubber mallet in a sterile plastic bag and Tryptic Soy Broth, a liquid medium containing nutrients that encourage the growth of Salmonella, was added. The samples incubated and immunomagnetic separation (IMS) was performed in order to recover Salmonella based on the presence of the Salmonella antigen in the sample. A secondary enrichment and incubation was performed with Rappaport-Vasiliadis (RVS) broth before streaking for isolation on Xylose Lysine Desoxycholate (XLD) and Brilliant Green Sulfa (BGS) agar plates. Plates with growth presumed to be Salmonella were analyzed to confirm their identity, level of antibiotic susceptibility and the specific Salmonella serotype that was present.

In study 2, Holstein calves were randomly assigned on d 0 to treatment (Control or Vaccine; n = 16 hd/treatment). Vaccinate calves were administered a commercially-available Salmonella Newport SRP vaccine while control calves received a placebo. A second dose was administered on d 21. On d 35, all calves were inoculated with either Salmonella Montevideo or Newport resulting in four treatments: Control – Newport; Control – Montevideo; Vaccine – Newport; Vaccine – Montevideo. Following inoculation, fecal samples were collected three times per week. On d 49 (14 d post-inoculation) one-half of the calves (Group 1) in each pen (and treatment) were euthanized and necropsied. The following lymph nodes were collected and cultured for the challenge strains of Salmonella: subiliac (left and right), popliteal (left and right), retropharangeal, superficial cervical (left and right), and mesenteric (ileo-cecal). On d 56 (21 d post-inoculation), all remaining calves (Group 2) were euthanized and necropsied. All lymph nodes were cultured for the challenge strains of Salmonella.

Study 2: No significant treatment differences were observed in the percentage of lymph nodes positive for Salmonella Montevideo or Newport for Group 1. However at 21-d post- inoculation (i.e. Group 2), there were fewer (P<0.05) right popliteal (0 versus 75%) and right pre-scapular nodes (0 versus 75%) that were Salmonella positive in the Vaccine - Newport compared to Control - Newport treatments. The percentage of left popliteal and left pre-scapular nodes likewise tended (P=0.10) to decrease in the Vaccine-Newport treatment compared to non-vaccinated controls. Post-inoculation fecal samples were not affected by treatment for either strain. Initial and final body weights and overall body weight change were not different among treatments.

In our studies, we identified a regional and seasonal phenomenon whereby Salmonella may escape carcass decontamination technologies. These data highlight the need to better understand how Salmonella is entering the animals’ lymphatics and to design pre-harvest and harvest strategies to mitigate this risk. While results are limited, some evidence suggests that a commercially available vaccine may reduce the duration of infection in the lymph nodes of cattle but more work is needed to evaluate this potential. 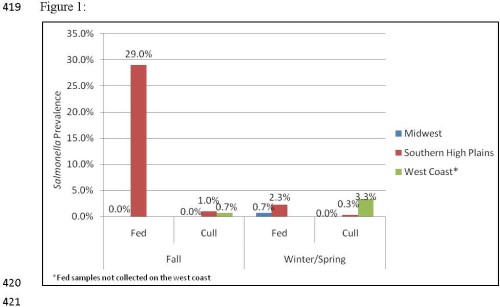 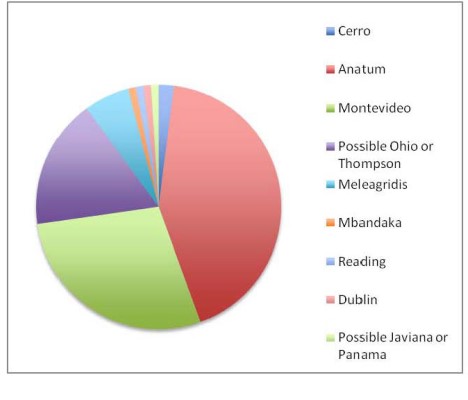