Several approaches for reducing E. coli O157:H7 colonization of the cattle gastrointestinal tract (GIT) have been experimentally tested, such as different feeding regiments, feed additives, probiotics, and vaccines. To date, most of these studies have either been inconclusive, or treatments have only modestly affected colonization. More importantly, none of these interventions have tested whether the prevalence of super-shedding is reduced in cattle populations. This is significant, as modeling studies suggest that possibly as high as 96% of E. coli O157:H7 isolates originate from super-shedding animals. It is evident that a more thorough understanding of the factors promoting super-shedding is needed before we can design effective evidence-based methods of reducing transmission of STEC from cattle populations to the food supply. The super-shedding phenomenon can be broken down in to three principle components: (1) phylogenetic lineage of the colonizing O157:H7 strain, (2) the community composition of the microflora of the rectal-anal junction, and (3) the innate and adaptive immune response of the host. This proposal is designed to determine the contribution of strain type in super-shedding.

Isolation of E. coli O157:H7
Upon arrival at the lab, the sample tubes were mixed vigorously for 30 sec then samples were spread onto agar plates for enumeration of E. coli O157:H7. When detected, counts of O157:H7 were reported as colony forming units (CFU) per swab. Animals were classified as super-shedders when counts were greater than 104 CFU/swab. Up to twenty presumptive E. coli O157:H7 colonies were picked for confirmation.

Strain characterization
All E. coli O157:H7 strains obtained from super-shedders were analyzed to identify strain-specific traits related to super-shedding. Genetic analyses were performed to determine strain lineages and other distinguishing features related to individual genotypes. Lineages of E. coli O157:H7 have been designated as I, II, and I/II. Lineage I/II share characteristics from both lineages I and II. While all three lineages have been found in cattle, only lineages I and I/II are typically associated with human disease.

Super-shedder prevalence among lots ranged from 0% to 4.5%. Overall, super-shedders were identified as 2.3% (n=102) of the bovine population tested.

Up to twenty isolates were characterized per super-shedder sample. In every case, all isolates originating from a sample were identical in the genotypic and phenotypic characteristics tested. This indicates that within an animal, super-shedding is a function of a singular strain type. 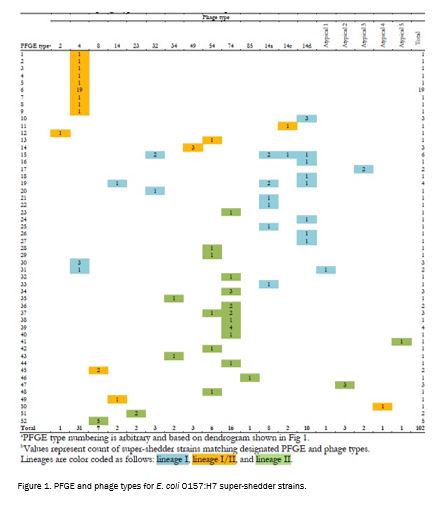 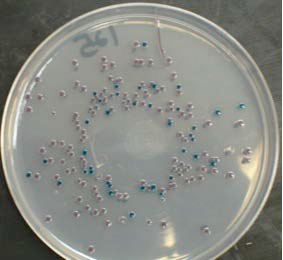