Strategies to Reduce Super-Shedding and the Bioburden of E. coli O157:H7 in Feedlots

The specific objectives of this project were to 1) determine the rate of occurrence and identify risk factors associated with feedlot cattle shedding of E. coli O157:H7 and 2) determine if super-shedder cattle are the result of being infected with specific strains or the result of ingesting a high dose compared to a low dose of E. coli O157:H7 regardless of bacterial strain.

Samples were collected from 4 feedlots over the period from September 2011 to May 2012. At each visit 20 fresh fecal samples were collected from the floor of two pens of cattle, placed on ice and submitted to the laboratory. A standardized questionnaire was administered to record information on animal age, weight, health status, pen condition, dietary history, and related management factors. Climate parameters were also collected. Standard microbiological techniques were used for recovery and quantification of E. coli O157:H7, including enrichment, immunomagnetic separation, culture on selective agar, followed by PCR confirmation.

Six strains of E. coli O157:H7 (3 normal-shedder and 3 super-shedder) were characterized with Pulsed Field Gel Electrophoresis (PFGE) and used for an inoculation experiment. One-year-old steers negative for E. coli O157:H7 were purchased and inoculated with a single dose of a single strain of E. coli O157:H7. The doses used were 102, 104, 106, 108, and 1010 colony forming units of bacteria. The steers were then placed in individual pens and sampled repeatedly until they either no longer had E. coli O157:H7 recovered from their feces, or the trial concluded (75 days after inoculation). Similar microbiological methods were used to recover and quantify E. coli O157:H7 in feces. Steers were euthanized and necropsied once they had stopped shedding, or the trial concluded. Tissues were taken for histological and microbiological examination.

A total of 890 fecal samples were collected and processed from the 4 feedlots (2 each from Texas and California). Of this, 199 (22.4%, 95% CI = 15.1%, 29.9%) were found to be positive for presence of E. coli O157:H7, with 72.1% of pens having at least one positive fecal sample. Prevalence varied by pen from 0% to 90%, and by feedlot from 8.4% to 30.2%. Fecal samples from pens with cattle on feed for less than 30 days had 33.2% of samples positive, while pens with cattle on feed for greater than 30 days had 16.3% positive samples. There was a positive correlation between a sample testing positive and daily maximum and daily minimum temperature during the 30 days preceding sample collection. In a multi-variable forward-stepping logistic regression model, light weight at entry to the feedlot and higher daily maximum temperature were associated with increased odds of a sample testing positive for E. coli O157:H7. The most probable number of bacteria shed per gram of feces from samples collected is shown in Table 1. Two samples met the definition of super-shedder (>10,000 bacteria/g feces).

Results from this project indicate that E. coli O157:H7 is relatively common but highly variable, both in terms of prevalence and shedding intensity, in the feedlot environment. High ambient temperature increases the proportion of cattle shedding the bacteria. Exposure to high doses of E. coli O157:H7 is the major cause of super-shedding of bacteria in feedlots. Variance in virulence of different E. coli O157:H7 strains exist but most strains are capable of causing super level shedding (104 CFU/g) if sufficient numbers of bacteria are ingested by a steer. Fecal pats defecated in feedlot pens increase the transmission of E. coli O157:H7 to pen mates but duration and loads of shedding by infected cattle vary among individual animals. Strategies that prevent steers from exposure to fecal contamination are beneficial against spreading and transmission of super shedding E. coli O157:H7 in pens and in populations in feedlots.

In the experimental inoculation trial, we found that duration and load of fecal shedding of bacteria were dose-dependent with a trend of higher dose leading to longer and higher levels of shedding.  No significant differences were observed between different inoculated strains, regardless of whether a normal or super shedder strain was inoculated. This is demonstrated by the figures below.

Table 1. Most probable numbers of E. coli O157:H7 per g of feces from positive fecal samples. 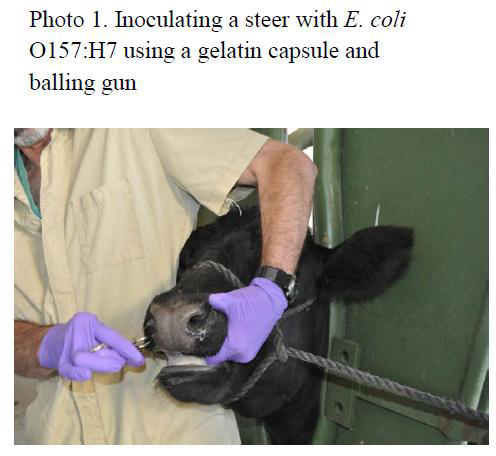 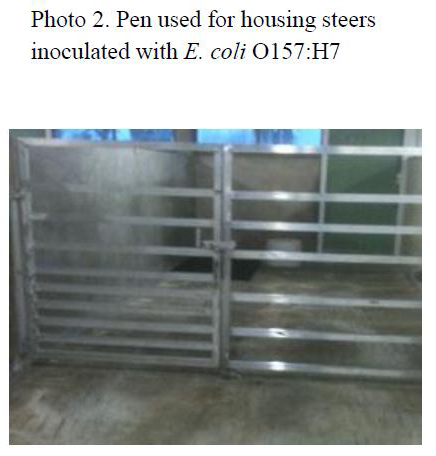