Recent USDA-FSIS rules have declared six new non-O157 STEC serogroups (O103, O111, O121, O145, O26 and O45) as adulterants in raw ground and non-intact beef products in addition to E. coli O157:H7. A need therefore arises to evaluate current intervention approaches to E. coli O157:H7 for efficacy against the non-O157 STEC serogroups. There has been much speculation that the use of current interventions will effectively reduce the non-O157 STECs in amounts equivalent to the reductions achieved with treatments directed against E. coli O157 on beef carcasses. However, data are needed to support these assumptions. Some preliminary data have indicated that the reduction of the pathogen loads on non-O157 STECs applied as a cocktail mixture to a carcass were SLIGHTLY less (0.2-0.3 log cycles less) than what we typically observe with E. coli O157. However, we previously were evaluating the reduction of six strains as opposed to one and we also did not directly compare reductions of the serogroup classifications of pathogens side by side. There is a need to evaluate the non-O157 STECs individually and not as a group (cocktail) to have strong data to support our hypothesis that the non-O157 STECs will be controlled in beef operations that are currently controlling E. coli O157.

We have identified the need to evaluate the “Big Six” non-O157 STECs in parallel, as opposed to a group, so as to obtain support that the non-O157 STECs will respond similarly to currently implemented intervention controls utilized effectively against E. coli O157 in beef operations. Our objectives were to (i) measure reductions of E. coli O157 and serogroups of non- O157 STEC in parallel by the application of hot water (HW, 180°F), lactic acid (LA, 5% ± 0.1) and acidified sodium chlorite (ASC, ≤1200 ppm) individually utilizing a simulated hot carcass brisket model and (ii) measure reductions of E. coli O157 and non-O157 STEC in parallel using the same interventions applied to chilled beef subprimals.

Evaluation of HW, LA and ASC on freshly harvested, hot carcass tissue surfaces were evaluated in three replications utilizing a brisket model. Within each repetition (one day), 14 beef briskets were obtained from a local retailer and transported directly to the laboratory. Briskets were cut into halves to produce 28 pieces. Four pieces were randomly assigned to each of the individual seven STEC E. coli serogroup, 3 strain inoculums (O157, O145, O45, O111, O26, O121 and O103). Inoculum concentrations were targeted to 107 CFU/ml to achieve approximately 105 CFU/ 50 cm2 on the brisket tissue surfaces. Inoculation and treatment were staggered to facilitate ample time for inoculation, attachment, treatment and sampling and were randomized in each repetition according to O group. Inoculation was conducted via complete submersion of each brisket piece into the single STEC serogroup inoculum followed by a 30-minute attachment period at the conclusion of which each brisket was randomized to one of four treatments (+ control, HW, LA or ASC). The positive control for each serogroup was sampled by taking 2 x 50cm2 samples at 1 minute and 1-hour post inoculation, whereas each treated brisket piece was sampled by taking a composite sample consisting of 2x 50cm2 swabs 1 hour post treatment. This sampling methodology facilitated estimates of the initial inoculation concentration followed by reduction on the positive control for comparison to each of the 1 hour post treatment brisket samples. Interventions to the brisket pieces were applied via pressurized canister and the pieces placed (flat) onto a sterile surface until sampled. Swab samples were transported to the microbiology laboratory and subjected to stomaching, serial dilution and spread plating to selective media to obtain manual count estimates of reduction efficacy. Each repetition evaluated all STEC serogroups and treatments in parallel, and thus, treatment order was randomized between repetitions.

In order to examine reduction on chilled surfaces, chilled beef subprimals (tri-tip) were obtained from a commercial processing facility and transported to the pathogen laboratory. Each experimental day consisted of subprimal units divided into 2 units per inoculum cocktail (2 + control and 2 replicates/ treatment). The randomized subprimals were subjected to parallel inoculation with an E. coli O157:H7 or non-O157 STEC 3 strain cocktails (each of the 6 cocktails prepared individually) to achieve an approximate surface concentration of 105 CFU/ 50cm2. The inoculated subprimals were subjected to intervention with each treatment (HW, LA or ASC) (n=2/cocktail) by application in a CHAD spray cabinet, which was sanitized and cleaned between each STEC cocktail and intervention combination. Subprimals were sampled by sterile swab (50 cm2) at 15 min post intervention application. Sample swabs were subsequently stomached, serially diluted and plated to selective growth media (Sorbitol Macconkey) to obtain manual reduction count estimates as compared to positive controls. Inoculum cocktails were formulated using sergroups from the Texas Tech University isolate collection, all of which were originally isolated from beef or cattle.

Raw count data from each study were input into a spreadsheet prior to log10 transformation. An analysis variable was created for each data set and reported as mean log10 reduction. Statistical analyses were conducted utilizing generalized linear models and LS Means estimates in SAS statistical software with α of 0.05.

Our overarching objective was to evaluate the intervention efficacies against the non-O157 STEC serogroups in comparison to serogroup O157, the latter serving as a potential indicator of reduction efficacy for the other serogroups. The important findings noted in the two studies are:

The USDA-FSIS Federal Register Document (Docket No. FSIS-2010-0023) states that current intervention practices against E. coli O157:H7 are expected to be just as efficient in reducing the non-O157 STEC serogroups. Industry processors, however, are subjected to the legal ramifications should the interventions fail to reduce these pathogens. Previous research by our group and others have demonstrated reductions of the non-O157 STECs using HW, LA and ASC, however, the reports may be confounded when comparing between O157:H7 and the non- O157 STEC serorgroups across studies. The data obtained in the current two studies suggests that the expectation that current interventions would be as efficient in reducing the non-O157 STECS as they are against E. coli O157:H7may be used in most cases to evaluate intervention efficacy. However, reductions of O111 and O103 may not be as great as observed for O157:H7. Until a particular serogroup such as O111 or O103 becomes reasonable likely to occur through industry testing in a specific facility, it would be recommended at this time for testing for E. coli O157:H7 to continue. Testing for other serogroups can occur if deemed a problem in a particular facility on a case by case basis and might be considered for a short period of time until a process in brought back into control. At this time, it does not appear that there is a significant public health risk created by not testing for all 6 serogroups. 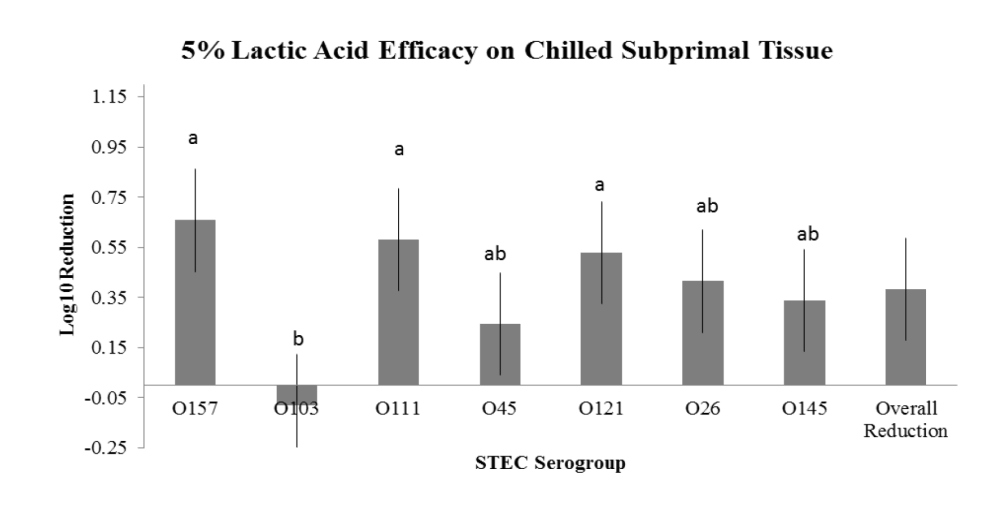