The Risk and Thermal Susceptibility of Non-O157 and O157:H7 Shiga-toxin Producing Escherichia coli in Non-intact Beef Products Intended for Foodservice or Retail

Marination and blade tenderization are widely used to enhance the palatability and marketability of underutilized meat cuts. However, the risk of pathogen internalization propagated by blade tenderization and marination been previously documented (Echeverry et al., 2010; Huang & Shen, 2011; Luchansky et al., 2009). Luchansky and colleagues (2009) recovered 33% of the surface inoculum within 1 cm of the muscle surface in bladet enderized products, while Muras and others (2012) observed that when a marination solution inoculated with 105 log CFU/ml O157:H7 was used to marinate beef tri-tip roasts, the pathogen was present at counts greater than 2.0 log CFU/cm2 at 21mm below the meat surface. Furthermore, blade tenderized beef products were implicated in several outbreaks of O157:H7 in the 2000s. While research performed in our lab (Echeverry et al., 2010; Liao et al., 2012; Chancey et al., 2013) and the labs of others (Heller et al., 2007) have demonstrated intervention-based reduction of external pathogens and subsequent translocation, the survival of non-O157 STECs in the internal cores of cooked beef steaks has been documented (Liao et al., 2012; Luchansky et al., 2012).

Pathogen resistance to previously considered lethal cook temperatures is of tremendous concern--especially in non-intact meat products, which despite the recognized risk of pathogen translocation are not currently distinguishable to the consumer. While there exist several genotypic and environmental factors which can influence bacterial expression of thermotolerance, previous research also suggests that simple substrate biochemistry and structure can influence survivability. Ahmed and colleagues (2005) indicated meat composition—namely fat content—influenced the post-cooking survival of O157:H7. Other researchers have demonstrated the influence of other biochemical traits, such as water activity and pH, on the thermal tolerance of pathogenic bacteria (Doyle & Mazzotta, 2000; Carlson et al., 2005). Data regarding the influence of such biochemical traits on the onset of thermotolerance in non-O157 STECs is severely limited. Similarly, the propensity for non-O157 STEC migration and survival in marinated beef systems is not well understood.

The objectives of this study were to investigate the internalization and cooking survivability of non-O157 (“Big 6” adulterants) and O157:H7 shiga-toxin producing Escherichia coli in non-intact beef products directed towards retail (marination; Phase One) or food service (blade tenderization; Phase Two).

Phase One:  Beef bottom sirloin flap sections were inoculated (106 log CFU/ml, 104 log CFU/cm2 attachment) with either E. coli O157:H7 one of the following non-O157 STEC serogroups: O145, O26, O111, O103, O45, or O121 (each one evaluated individually) STEC (7 total inoculation treatments). After inoculation, flap sections were marinated in a typical marination solution containing food-grade blue dye for 30 or 60 minutes using a vacuum tumbling marination system. At the conclusion of each tumbling interval, marination penetration and microbial translocation were evaluated. The remaining sections were stored at 0 to 4°C in vacuum packages for 14 d. After storage, sections were subjected to analysis of pathogen dispersion, marinade migration, and pathogen survival after cooking to targeted internal temperatures (55, 60, 65, or 71°C). Biochemical properties (composition-uninoculated only, pH, and water activity) were evaluated on raw and cooked samples. Surface swabs and internal core samples obtained at each tumbling and storage interval (0 or 14 d) was used to determine translocation (swabs), internalization (cores), and pathogen survival after cooking (cores).

Phase Two:  Carcasses (n = 3 per criteria) meeting distinct categories of intramuscular fat and pH (marbling score; dark cutting status) were identified for strip loin collection: modest to moderate marbling and no-dark cutter; traces to slight marbling and no-dark cutter; modest to moderate marbling and dark cutter; traces to slight marbling and dark cutter. Strip loins from each side of the selected carcasses were quartered to produce eight equal sections per carcass. One section from each carcass was reserved for analysis of raw biochemical properties (composition, pH, and water activity) while the remaining seven sections per carcass were inoculated (106 log CFU/ml, 104 log CFU/cm2 attachment) with one of seven STEC serogroups (O157:H7, O145, O26, O111, O103, O45, or O121). After 14 d of vacuum storage, sections were blade tenderized and portioned into five 2.54-cm steaks. Steaks were used to evaluate pathogen internalization and thermal susceptibility at targeted end-point cooking temperatures (raw, 50, 60, 71, and 85°C). Detection and enumeration of surface and core samples will accommodate quantification of pathogen concentration, internalization and cooking destruction.

These data reinforce the marinade and blade mediated internalization of pathogens in non-intact meat products. As such, this supports the importance of validated subprimal intervention strategies and cooking protocols aimed to reduce the risk of non-intact beef. Furthermore, these data imply that STEC O157:H7 may not be the best representative serogroup for all STECs. Of critical importance is the examination of each O group as individuals and the evaluation of risk based on O group.  It is obvious that some strains are more heat tolerant than others, but the risk of those strains specifically in beef products should be considered. 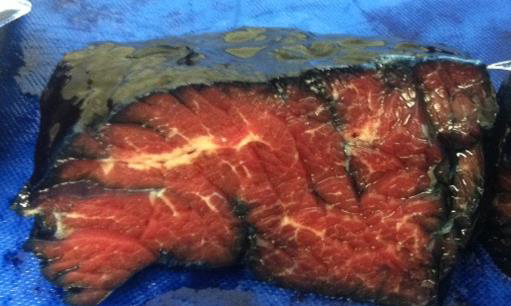 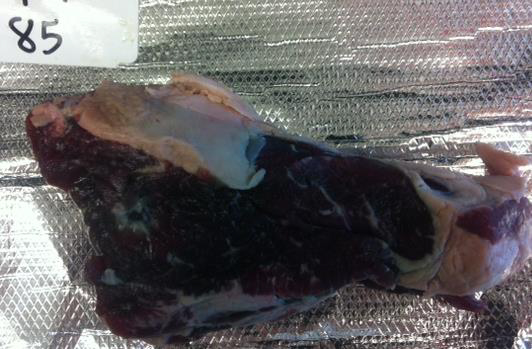