Salmonella sequestered in bovine peripheral lymph nodes are a potential source of ground beef contamination, and it has been proposed that contamination of these nodes may occur via bacteria introduced in abrasions on the hide and/or by biting arthropods. The biological characteristics of the horn fly, Haematobia irritans (L.) (Diptera: Muscidae), lend itself to this possible route of Salmonella introduction. The location where horn flies cluster on cattle and the seasonal occurrence of this biting fly coincide with both the recent intradermal challenge models using Salmonella and the evidence for seasonality of Salmonella prevalence. More importantly, these flies are intimately associated with their bovine host and leave the host only intermittently to oviposit in fresh manure pats. Cattle hides and feces have high concentrations of Salmonella and are prime sources for tactile exposure of horn flies to microbial pathogens. Fly grooming behavior following contact with pathogens in the manure pat or on its host can facilitate the distribution of these microbes over the fly’s surface, particularly to its mouthparts. This creates a scenario in which horn flies can mechanically transmit Salmonella as they breach the skin barrier while acquiring a blood‐meal. Despite this critical possibility, the horn fly‐Salmonella interaction remains unclear. The overall, long‐term goal of this project is to enhance the safety of beef production through a better understanding of the insect‐microbe interactions that may contribute to increased levels of pathogenic Salmonella in feedyard and dairy cattle.

The objectives of the project were to:

Experiments to address objective 1 were initiated by rearing horn fly embryos on one of four cattle manure treatment types: 1) sterilized, inoculated, 2) sterilized, non‐inoculated, 3) non‐ sterilized, inoculated, and 4) non‐sterilized, non‐inoculated (control). Manure was sterilized by autoclaving to reduce the resident microbial community and, as needed, was inoculated with ≈105 CFU of a green fluorescent protein‐expressing Salmonella strain (Salmonella‐GFP). The frequency of pupal recovery and adult eclosion was calculated, and newly emerged adult flies resulting from embryos reared on Salmonella‐GFP media were assessed for infection, i.e., if embryos are reared on Salmonella‐inoculated manure, does this result in the production of newly emerged flies that are infected with the bacteria? The pupal casings from which these adults emerged were also assayed for Salmonella‐GFP.

Experiments to address objectives 2 and 3 were conducted simultaneously. Newly emerged horn flies were allowed to walk around and probe a confluent lawn of Salmonella‐GFP for 10 min to mimic tactile exposure of flies to bacteria on the manure pat or hide. Flies were then placed in petri dishes and allowed to groom for 15 mins or 1 h, and the heads of these flies were assayed for presence of the test strain. Horn fly guts were also dissected and visualized at these timepoints using a fluorescent microscope to evaluate whether horn flies ingest the bacteria after contact and grooming. Newly emerged horn flies were then fed a single bloodmeal containing a low (≈102CFU), medium (≈104CFU) or high (≈106CFU) dose of Salmonella‐GFP and were then assayed for Salmonella infection status at select timepoints up to 72 h. In parallel, newly emerged horn flies were fed a low, medium, or high dose of Salmonella‐GFP, placed individually in sterile cages, and excreta residues on the walls of the cage were assayed hourly for prevalence of the test strain. Fly excreta was monitored hourly for 12 h, and also over a 12‐ 24h time period.

Objectives 2 and 3: Are adult horn flies’ reservoirs or vectors of Salmonella? Salmonella‐ GFP was recovered from heads and visualized within the gut of adult flies that came in brief contact with a lawn of Salmonella and were then allowed to groom (Figure 1). Delivery of Salmonella‐ GFP in a bloodmeal resulted in recovery from surface sterilized adult horn flies up to 72 h after ingestion, regardless of the dose consumed (Figure 2). Salmonella‐GFP was cultured from fly excreta beginning 6‐7 h after consuming a medium or high dose meal and beginning > 12 h from 60% of flies fed the low dose meal. S.Montevideo‐GFP cultured from fly excreta was in quantities that can provide an additional microbial source on the animal’s hide (mean 5.65 x 102 –3.38 x 103 CFU/fly), especially given the potential for heavy fly burdens on animals.

Objective 4: Horn fly‐host interactions. Hide swabs under the cages of all study animals were negative for Salmonella‐nalR prior to fly infestation or application of manure containing the test strain. Upon termination of the study (day 5), flies assayed from Animals 1 and 2 were surface contaminated and remained colonized with the Salmonella‐novR/nalR strain. Hide swabs from the area under the respective cages tested positive for the test strain. Half of the flies assayed from Animal 3 were surface contaminated and colonized with the Salmonella‐nalR strain, while the test strain was only detected in one third of flies from Animal 4.

The data collected in this study suggest that exposure of horn flies to microbial pathogens on the host is a viable route by which flies can acquire the bacteria. These data also support the role of the horn fly as an environmental reservoir with the potential to mechanically transmit Salmonella, since the frequency with which horn flies take blood‐meals (20 – 24 per day) provides the opportunity for multiple inoculations by a potentially robust number of flies. The development of horn fly larvae in Salmonella‐contaminated manure results in pupal casings that may be a source of contamination in animal production facilities, but the current study did not detect a high frequency of transstadial persistence of Salmonella from larvae to adults. 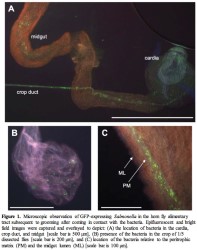 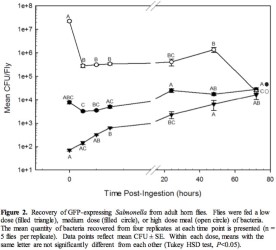