E. coli and Salmonella are a concern to the food production industry. Both possess combination of antimicrobial resistance and virulence genes that act in concert with undefined host factors, to gain an advantage over beneficial bacteria. In order to understand factors involved in the dissemination of multi‐drug resistance (MDR) among E. coli and Salmonella it is necessary to study the relationship between antimicrobial resistance and disease-causing genes, as well as their ability to transfer between bacteria. The relationship of other host factors must also be considered and examined.

First, the pansusceptible E. coli and Salmonella possessed higher numbers of virulence genes the multi‐drug resistant isolates did and had a higher incidence of being conjugative (being able to receive resistance plasmids) than the MDR E. coli and Salmonella did of transferring resistance plasmids. Second, the potential diameter of the gastrointestinal tract may play a role in the ability of bacteria to conjugate and transfer resistance genes,

The use of antibiotics provides a selective advantage for MDRE and MDRS bacteria. Additionally, isolates that possess virulence genes may also have a selection advantage. Therefore, it is possible that the PSS isolates with virulence traits may be present in the gut simultaneously with the MDR isolates. This might increase the likelihood that virulent strains may have a greater opportunity to acquire resistance than harmless commensals. The results show that a small diameter may be a benefit with regard to cattle in that they have a considerably larger intestinal tract than other species.

trPSE was the same as PSE

trPSE was the same as PSE 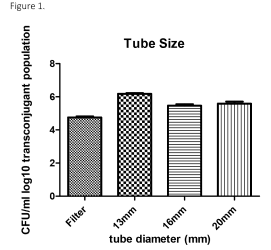