Investigation into the Efficacy of bdellovibrio bacteriovorus as a Novel Pre‐Harvest Intervention to Control Escherichia coli O157:H7 and Salmonella spp. in Cattle Using an in vitro Model

Salmonella and Escherichia coli O157:H7 are just 2 of the many pathogens responsible for several foodborne illness outbreaks each year. Cattle commonly harbor these pathogens in their gastrointestinal tracts; thus, these pathogens are capable of contaminating beef products.

The objective of this study was to mimic the digestive system of a cow to investigate the effectiveness of Bdellovibrio bacteriovorus to control E. coli O157:H7 and Salmonella populations cattle feces and rumen fluid.

Bdellovibrio bacteriovorus was grown per ATCC guidelines to create a stock culture that was stored in the ‐80°C freezer. Fecal and Rumen fluid samples were collected from dairy heifers at the Kansas State University dairy unit. The fecal and rumen fluid samples were inoculated with antimicrobial resistant or susceptible strains of E. coli O157:H7 and Salmonella. All experimental samples were mixed with 10 ml of B. bacteriovorus to create a final target concentration of 1.0x104 CFU/ml. At 0-, 24-, 48- and 72-hours following inoculation, the samples were analyzed to determine the surviving populations of antimicrobial susceptible and resistant E. coli O157:H7 and Salmonella in cattle rumen fluid and feces.

Reductions in Salmonella populations indicate that B. bacteriovorus may have the potential to inhibit Salmonella survival and growth in cattle. Although these findings are preliminary, our research does suggest promise for B. bacteriovorus as a novel intervention. Future studies are necessary to determine the survivability and effectiveness of B. bacteriovorus throughout the entire digestive system of a cow. Eventually, studies will be required to determine efficacy within a live animal. Using this and future studies as the foundation, the long‐ term goal is to develop a novel intervention that will reduce Salmonella populations within the cow and, thus, lead to fewer Salmonellosis outbreaks. 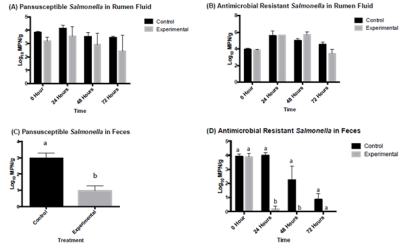 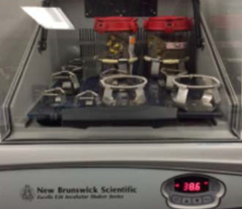 Figure 3. A typical laboratory setup to analyze feces and rumen fluid for Salmonella. 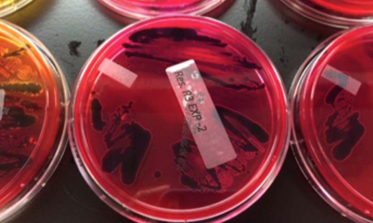