Antimicrobial resistance is a global challenge and food animal production, including cattle production, is increasingly singled‐out as a significant contributor to emergence, amplification, persistence and dissemination of antimicrobial‐resistant bacteria. Regulatory controls and prudent‐use practices are the primary strategies used to control resistance, and these are probably very important to limit the emergence of resistance to new antibiotics. Once the prevalence of resistance has increased to a clinically relevant level, however, it is unclear how effective prudent use and regulatory control practices will be in the short‐term. This is primarily due to the fact that prudent use and regulatory controls rely on a very simple, but ineffective mechanism of “passive decay.” That is, we remove antibiotic selection pressure and “hope” that the resistant bacteria decline in prevalence. This is likely to happen eventually, but the rate of decline is a function of the fitness cost that is incurred by the bacteria for carrying resistance traits. Unfortunately, many traits cost little to retain in bacterial populations and there are numerous examples in the literature whereby removal of antibiotics has resulted in only limited declines in resistant populations of antibiotic resistant bacteria.

Presumably, this tight regulation evolved to limit the fitness cost for expressing these traits when they are not needed. For the current proposal we developed a means to induce expression of tetracycline efflux pumps. We show that this method activates the resistance genes while not having any antibacterial activity against susceptible bacteria. Feeding our inducer tetracycline resistance to dairy calves produced mixed results, but this has led to several additional ideas for developing this strategy.

The specific objectives of the study were to: (1) Develop a protocol for preparing a tetracycline‐resistance inducer and confirm activation of efflux pump synthesis without antibacterial function; and (2) Conduct a clinical trial to determine if feeding calves the tetracycline inducer will reduce the proportion of tetracycline and multidrug resistant E. coli in cattle feces.

Our inducer is a commercially available veterinary antibiotic that we modify by “cooking” the antibiotic for a defined temperature and time. Bacterial culture experiments were used to assess the impact of the degraded antibiotic on susceptible and resistant E. coli strains. This involved treating the cultures with modified and unmodified antibiotic and using agar plate counts with selective media to quantify changes in resistant and susceptible populations of E. coli.

Subsequently, we harvested RNA from the bacteria and used a molecular assay (real‐time PCR) to quantify changes in expression of two tetracycline efflux pump genes. We originally proposed testing this idea by feeding dairy calves a daily dose of the modified antibiotic and monitoring changes in the counts of resistant E. coli in the calf feces. Immediately before we initiated our trial with 20 calves at a working dairy, the herd veterinarian warned us that our experiment would probably be considered an extra‐label use of antibiotics for food animals by the FDA and the animals might have to be destroyed to prevent their introduction into the food chain.

Consequently, we had to purchase surplus bull calves and conduct the experiment in a controlled environment followed by euthanizing the treated calves. This revised protocol worked, but it severely limited the sample size that we could include for these initial trials.

Heating our commercial antibiotic produced eight distinct degradation products as determined by HPLC‐UV (not shown). Defined strains of E. coli were exposed to the degraded product (“inducer”) and our sensitive strain of E. coli grew normally (not shown). Exposure to degraded products (two different formulations) induced expression of two tetracycline efflux pump genes (Fig. 1, tet(A); tet(B) not shown). Having satisfied these conditions, we conducted three feeding trials. For trial 1, after 14 days treated calves had 70‐fold fewer tetracycline‐ resistant E. coli compared to untreated controls. Furthermore, we were unable to detect any multi‐drug resistant E. coli, which was expected because most multi‐drug resistant strains harbor tetracycline resistance. Trial 2 was rejected from the study because we encountered significant calf health problems before we could conduct the trial. Trial 3 resulted in a non‐significant effect. Pooling the results from trials 1 and 2 showed a 3‐fold combined reduction of tetracycline‐ resistant E. coli, but this was not statistically significant. Additional research indicates that for our strategy to work, cofactors need to be present that take advantage of the fact that these bacteria are expressing resistance genes when they are not needed. We are endeavoring to identify suitable cofactors, but if these are not consistently present in calves, we expect to see variance in the outcome of the treatment. If our strategy is working, additional variables need to be defined including the appropriate dose of the degraded antibiotic and the duration of exposure. Findings from the current study have been leveraged into an intramural research project at Washington State University that will identify cofactors and determine which component of the degraded antibiotic is responsible for inducing expression of the resistance genes. Two additional extramural funding applications have also been submitted. 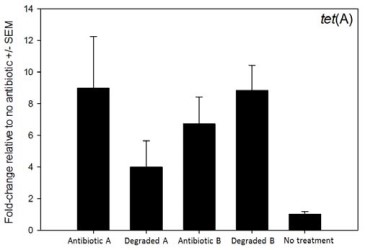