By-products from the ethanol industry, distillers grains (DG) in particular, are being used in increasing amounts as a feedstuff in the cattle industry due to the nature of their availability, nutrient value and low cost. Wet DG are a product of the dry milling industry of ethanol production and depending upon the plant and its capabilities; the relative amounts of distillers grains and distillers soluble mixed together is variable.

Previous studies have shown that feeding DG causes an increase in polyunsaturated fatty acid (PUFA) content in the muscles. These PUFA’s are more readily oxidized, causing a reduced shelf-life, more rapid discoloration during retail display and off-flavors. The focus of this research was to study the effects of a low-fat DG (without the addition of solubles) in comparison to the traditional levels of fat in wet DG and corn-based diets.

Cross-bred, yearling steers (n = 96) were allocated to three different finishing diets and fed for 131 days. The diets consisted of low-fat wet distillers grains with no solubles (LFWDG; 4.7% fat), traditional wet distillers grains with solubles (TWDGS; 6.9% fat) and a corn-based, control diet (3.6% fat). Forty-five USDA Choice carcasses, 15 from each treatment, were randomly selected, aged 14 days, and sampled for taste panel and Warner-Bratzler Shear Force (WBSF) testing, oxidation measurement (TBARS), and color (L*, a*, b*) and discoloration ratings during simulated retail display. Percent discoloration was estimated every day for seven days by trained panelists (n = 7). Samples for taste panels and WBSF were obtained at the beginning and end of the seven day retail display period. Oxidation was measured after 0, 4 and 7 days of display, and color/discoloration were recorded daily during the display. Steaks were cooked to 71°C for WBSF and sensory testing. The taste panel was a trained panel. Fatty acid profiles, mineral analysis and muscle composition samples were removed prior to retail display.

The control diet had much less PUFA than diets containing DG, and a difference in PUFA of 0.40 (about 10%, P = 0.08) was found between LFWDG (4.86% of total lipid) and TWDGS (4.46%). Meat from animals fed control diets had 2.99% PUFA. This difference would support the increased amount of discoloration and lipid oxidation between the two diets containing DG, especially toward the end of the retail display period. An increase in total trans fatty acids was also significantly different (P ≤ 0.05) in comparison to the corn-based diet. Fat percent and moisture content was not significantly different among the dietary treatments.

Although the LFWDG diet contained less fat on a percentage basis than the TWDGS diet, more of that fat was found in the DG portion of the diet. Much of the fat in the TWDGS diet came from the distillers solubles. Researchers hypothesize that fats in the distillers soluble are readily hydrogenated in the rumen while those contained within the DG fraction are more protected from biohydrogenation. This would explain why meat from cattle fed the LFWDG diet tended to have more PUFA which would help explain why there was a decreased shelf-life and increased oxidative rancidity of the samples from the LFWDG diets toward the end of retail display. In summary, LFWDG decreases shelf-life and increases oxidative rancidity in retail displayed strip loin steaks.

The reduction in shelf stability has implications for international markets. Most beef is exported on ships in refrigerated containers and arrives after extended cooler storage – thus with reduced shelf-life. Should that beef come from cattle fed low-fat distillers grains the shelf life reduction, and the potential for development of off flavors during retain display, could be greatly increased. Further work is needed to identify optimal strategies to control the issue. 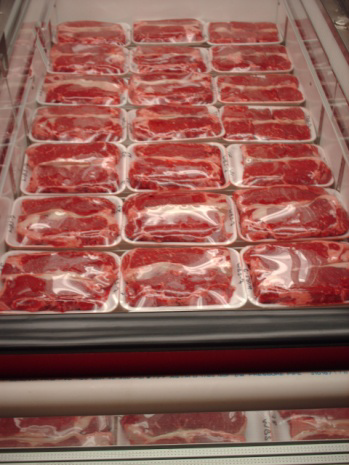