Calcium plays a signiﬁcant role in the living muscle, causing contraction and relaxation. Most of the calcium in the cell is contained in the sarcoplasmic reticulum (SR). Mitochondria are secondary calcium‐sequestering organelles. After death, calcium seeps from the SR and activates an enzyme system called calpains. Calpains work to degrade muscle proteins and results in higher tenderness. Therefore, calcium ﬂux impacts tenderness.

The hypothesis is that PUFA content in the SR membrane would increase as a consequence of feeding distiller’s grains, which would predispose the SR membrane to oxidation, and cause a greater postmortem release of calcium into the cytoplasm. Cytoplasmic calcium would activate proteolytic degradation via the calpain system and thereby enhance tenderness.

It is hard to measure calcium release within the cell because calcium binds with many diﬀerent proteins, making it diﬃcult to quantify how much has been released. The best approach is to isolate an organelle containing calcium and quantify calcium release under various conditions. Isolating intact SR proves very challenging, however. The structure of the sleeve‐like organelle makes it exceptionally diﬃcult to isolate without damaging its inherent structure. Fortunately, mitochondria are relatively easy to isolate intact and oﬀer the opportunity to study calcium release from an organelle under carefully controlled and tightly deﬁned conditions. In this way, mitochondria can be used as a model system for the SR in the study of calcium ﬂux.

Cattle (n=48) were fed a corn‐based ﬁnishing diet with or without deoiled, dried distillers’ grain (50% DM basis). After harvest, strip loins were collected and steaks from each loin were aged for two, eight, 14, and 21 days, powdered, and stored at ‐80°C for lab analysis. Samples (n=12) were randomly sub‐sampled from each diet group for all aging periods. Mitochondria were isolated using high speed ultracentrifuge from day two, eight, and 14. The SR was isolated from each day two sample. Both mitochondria and SR samples were analyzed for PUFA content using gas chromatography, and phospholipid content using thin layer chromatography. Mitochondria from days two and eight were artiﬁcially oxidized using an iron and ascorbic acid mixture.

Results indicate that greater PUFA content deposited in organelles may aﬀect Ca ﬂux by increased susceptibility to oxidation. A distiller’s grain diet may inﬂuence Ca ﬂux and ultimate tenderness by this mechanism.

Tenderness is one of the most important attributes of a consumer’s eating experience and inﬂuences the economic value of beef. Diets, such as distillers’ grains, have the opportunity to impact the ultimate tenderness of beef. Better understanding of the biology of beef tenderization and how to alter beef tenderness can provide for the development of strategies to optimize tenderness and achieve the highest possible value for beef and consumer satisfaction ratings. 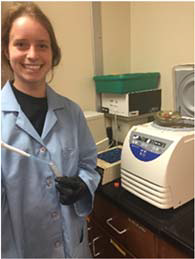 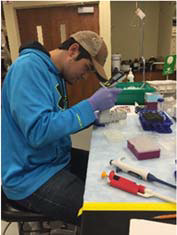