Several studies have shown that multiple factors impact ﬂavor in beef (Calkins & Hodgen, 2007; Farmer & Patterson, 1991; Kerth & Miller, 2015; Legako, Dinh, Miller, & Brooks, 2015). Through the development of the standardized beef whole muscle ﬂavor lexicon, a comprehensive list of ﬂavors were determined present in beef whole muscle cuts (Adhikari et al., 2011). In addition, effects of cooking method, degree of doneness, and cut on beef ﬂavor attributes and consumer liking have been studied. Furthermore, research on consumer perceptions of millennials, non‐millennials, heavy beef‐eaters, and light beef‐eaters has been conducted. The impact of grind size, patty thickness, fat level, holding time and cooking method effects on beef ﬂavor attributes and consumer liking in ground beef also has been studied. Consumer studies have included Central Location Tests and In‐Home Use Tests to assess consumer liking (Bamsey, 2017; Beavers, 2017; Berto, 2015; Glasscock, 2014; Laird, 2015; Luckemeyer, 2015). Most recently, these previous studies have been used to model beef ﬂavor. Flavor has been shown to be inﬂuenced by the development of volatile aromatic compounds that are derived from either lipid heat denaturation, Maillard reaction products, or their interaction.

Steaks were evaluated using an expert, trained beef ﬂavor and texture descriptive attribute panel, for volatile aroma chemical compounds using a gas chromatography–mass spectrometry (GC/MS) system, and Warner‐Bratzler shear force. The results were used to validate the ﬂavor model currently being developed at Texas A&M University using past data. The REIMS technology identiﬁed by Colorado State University was used to assess volatiles at the end of cooking to determine the efficacy of the instantaneous GC/MS technology to predict beef ﬂavor.

The objectives of this study were to 1) validate the beef ﬂavor model developed in 2017/2018; 2) utilize REIMS to predict beef ﬂavor; and 3) more fully understand how level of lipid oxidation in raw meat in combination with cooking method impacts beef ﬂavor.

The steaks were evaluated by an expert trained meat descriptive attribute using a 16‐point scale within each lexicon (0 = none and 15 = extremely intense).

The data were analyzed using PROC GLM procedures of SAS to examine the effects of raw TBARS group and cooking method on descriptive ﬂavor and texture sensory attributes, TBARS values (raw and cooked), and volatile aroma compounds from both GC/MS systems. The Beef Modeling Equation was used to predict trained descriptive sensory attributes using the volatile aromatic compounds from the GC/MS system. Additionally, the results of the equation were used to test the validity of the Beef Modeling Equation.

The SV, SVG, and grill cooking methods were responsible to create a wide range of ﬂavor attributes and volatile compounds. The grill treatment was responsible for developing more products from the Maillard reaction and these products were responsible in producing more positive ﬂavor attributes from the trained panelists, produce more pyrazines, and more Strecker aldehydes. The grill treatment was also able to mask some off‐ﬂavors, and more tender samples. All three cooking methods affected tenderness, which all the treatments had “very tender” and “tender” steaks.  The low, medium, and high levels of lipid oxidation were responsible for creating a wide range of ﬂavor attributes and volatile compounds. The high level of oxidation was responsible for creating more negative ﬂavor attributes, categorized as off‐ﬂavors, developing more aldehydes and alcohols due to the oxidation. The storage time negatively affected redness and luminosity of the steaks. The REIMS technology was able to predict with high accuracy both level of lipid oxidation and cooking methods.

Packaging method greatly impacts the types of ﬂavors and tenderness produced by beef products. In this study, packaging had a greater impact on tenderness and ﬂavor as measured, when compared to muscle. Proper selection of packages by processors can result in longer shelf life with a more tender, ﬂavorful product.

Beef ﬂavor is one of the biggest factors for the consumer repeat purchase. However, beef ﬂavor is very complex and there are a lot of factors that affect how beef ﬂavor is developed and perceived. This research was able to describe how initial level of lipid oxidation developed from a retail set up and Maillard reaction products produce beef ﬂavor. Results can be used by foodservice operators and the industry as a whole to understand better cooking methods and lipid oxidation and how that impacts beef ﬂavor. 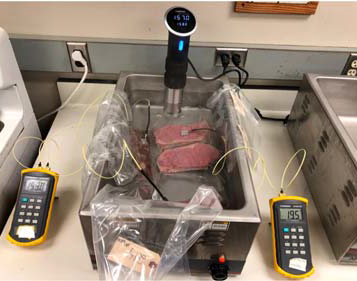 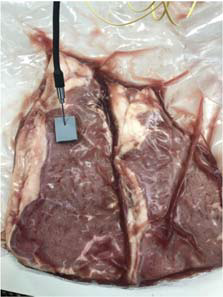 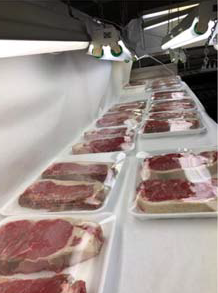 Figure 2. Thermocouple inserted through the foam tape and the vacuumed bag (a), steaks overwrapped and displayed under lights (b).