The US beef industry utilizes great quantities of water to produce a single kilogram of beef (Rotz et al., 2019).  Though the majority of the water is consumed pre-harvesting (Asem-Hiablie et al., 2019), recent reports indicated it requires in excess of 3,000 L of water to process a single animal (Li et al., 2018).  Water security in the southern High Plains, a major beef producing area, is becoming a major concern due to the diminishing High Plains Ogallala Aquifer (USGS, 2017).  This has required beef processors in this area to begin seeking strategies that conserve water and generate long-term sustainability of their facility. Spray chilling, a process that intermittently sprays postmortem beef carcasses to reduce carcass temperatures, has occurred in the US since the late 1980s.  Beef spray chilling consumes approximately 5% of the water needed to process a single head (Li et al., 2018).  Many studies, occurring from the late 1980s to the late 1990s, have determined spray chilling is an economically advantageous process as it reduces postmortem carcass chilling losses, or shrink.  Much of the moisture retained from spray chilling has been traced to the exterior of the carcass (Johnson et al., 1988); however, no knowledge exists on spray chilling’s impact on salable yield.

The objective of this study was to evaluate the impact of a more sustainable, reduced water use beef spray chilling on beef carcass chilling rate, quality, safety, and salable yield.  These objectives were met by comparing a reduced volume to a conventional, high volume spray chilling protocol.  These protocols were tested to determine the influence of water volumes on carcass chilling losses, chilling temperature declines, USDA grade, microbial reduction, tenderness, cutability, and composition.

Carcass sides (N = 1,978 paired sides) were subject to alternative chilling treatments.  Prior to chilling, all side weights were evaluated on the harvest floor, and a subset of paired sides (n = 72 paired sides) were subjected to microbial analysis (aerobic and coliform bacteria) at three locations (round, flank, and brisket). Additionally, paired sides selected for microbial analysis (n = 72 paired sides) were electronically monitored for temperature declines of the deep round, loin and carcass surface throughout the entirety of chilling. One side was conventionally spray chilled with 104.1 L over a 12 h period, while its pair was chilled with 3.2 L of water over a 3 h duration.

After chilling, chilled weights were obtained and paired sides were simultaneously evaluated for USDA grade attributes via instrumental analysis.  Sides selected for microbial analysis were segregated to a single rail in the merchandizing cooler for post-chilling collection.  Eighty-five carcasses (n = 85 paired sides) were selected at grading with a pre-determined selection matrix for a full carcass cutout.

With water security concerns arising, processors must seek areas where they can reduce water consumption to increase sustainability and longevity of operations at their facility.  Our findings indicate water volumes applied during spray chilling can be reduced without altering beef quality, safety, tenderness, or percent salable yield.  Furthermore, decreased water volumes applied during spray chilling generate lesser quantities of total fat that must be rendered.  This reduction would allow for lesser quantities of water and energy required for the rendering process. 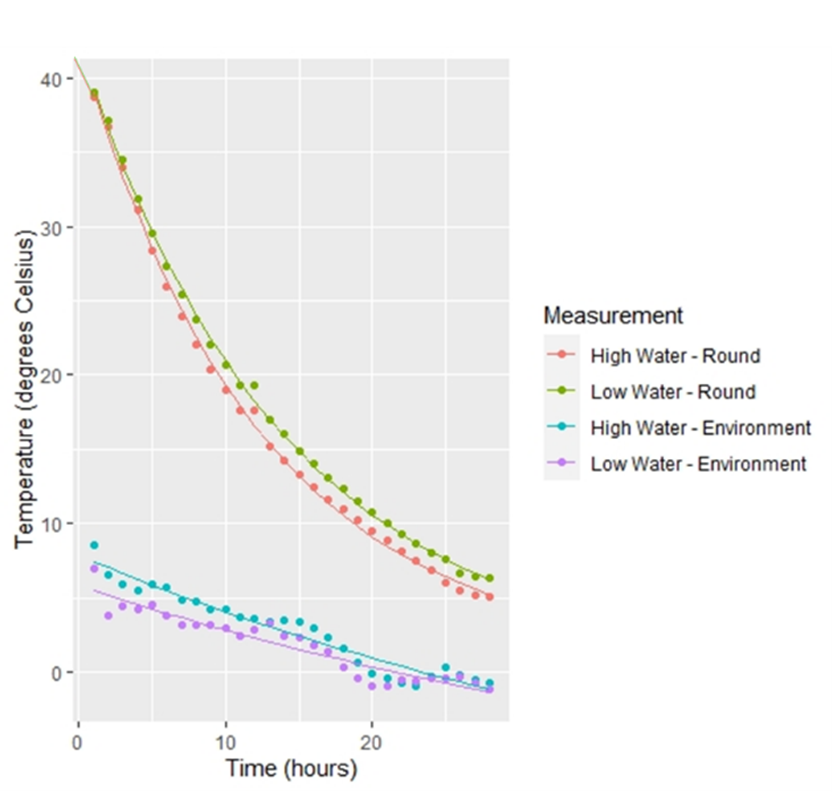