Over the past decade, we have seen the media place a lot of blame for our changing climate on cattle. Scientific evidence does not support this claim however for cattle in the United States. Cattle do produce a lot of methane gas, primarily through enteric fermentation and fermentation in manure. Methane is a powerful greenhouse gas that, along with nitrous oxide, carbon dioxide and some other compounds in the atmosphere, create a blanket around our planet to keep us warm. This is a good thing; without this atmospheric blanket, the earth would be too cold for us to survive. The current problem is that concentrations of these gases in the atmosphere are increasing, which is thickening our blanket.

Methane from cattle production is part of a natural carbon cycle that has been happening since the beginning of life on our planet. Through photosynthesis, carbon dioxide is extracted from the atmosphere and fixed as carbohydrates in plant material. Cattle consume these carbohydrates, which in part are decomposed in the animal and excreted in manure, where some of the carbon is transformed to carbon dioxide and methane gases respired back to the atmosphere. Most of this methane is oxidized in the troposphere (lowest level of atmosphere) by hydroxyl radicals, through a chain of reactions (Wuebbles and Hayhoe, 2002; IPCC, 2013). Within about 10 years of its release, more than 90% of the methane is removed from the atmosphere with the carbon in the methane ultimately transformed back to carbon dioxide to become available for fixation in plants (Figure 1). 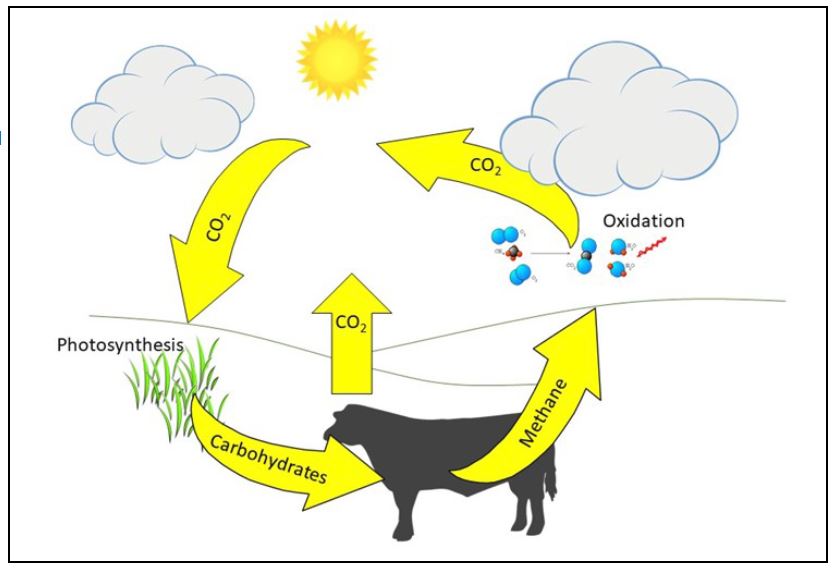 Figure 1. Methane production by cattle is part of a natural carbon cycle where the methane oxidizes in the atmosphere over a period of years converting the carbon to carbon dioxide (CO2) that can be fixed through plant growth to form carbohydrates in feed. Within this cycle there is no long-term impact on climate if methane emissions and oxidation are in balance.

If we compare the emissions from cattle to those emitted by vehicles through the combustion of fossil fuels, both affect the blanket around our planet. However, there is a major difference between these two sources of greenhouse gases. When we burn fossil fuels, we take carbon that has been stored in the earth since pre-historic times and convert it to carbon dioxide released to the atmosphere (Figure 2). For every gallon of fuel consumed, about 20 pound of carbon dioxide are created and released to the atmosphere (EPA, 2019). Some of this carbon dioxide is absorbed by the oceans and soil, but we are releasing this gas more rapidly than it can be absorbed. For this reason, we are observing a relatively rapid increase in atmospheric carbon dioxide concentration, and this effect on the atmosphere will be with us for 1000s of years (NASA, 2019). Whereas cattle are part of a natural cycle with short-term impact, burning of fossil fuels has a much more permanent impact (IPCC, 2013). 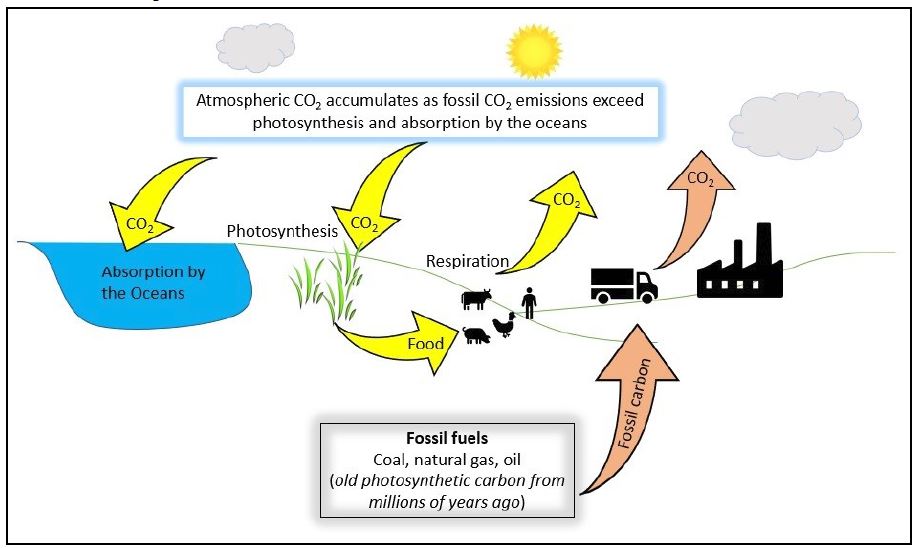 Cattle numbers and greenhouse gas emissions The mixing ratio (volumetric concentration) of methane in the atmosphere is increasing (NOAA, 2019), so are cattle contributing to this increase? If the number of cattle was increasing, then they could be considered part of the increased methane release to the atmosphere. Cattle numbers in the United States, however, have been stable or declining for many years (NASS, 2018). Beef cow numbers peaked in 1975, and the current number is similar to that maintained in the early 1960s. Dairy cow numbers in the United States are the lowest they have been in over 100 years. Their number peaked in 1945 and has been declining ever since. Since calf, heifer, stocker and other cattle in the country vary in proportion to cow numbers (NASS, 2018), we can conclude that total cattle numbers are not increasing.

Cattle numbers are only part of the consideration though. Modern cattle are getting larger and more productive. Therefore, they consume more feed and produce more methane per animal. Cattle are also becoming more efficient by producing more meat or milk per unit of feed consumed. All aspects considered, estimates of methane sources in the United States show a decline in emissions from cattle and their manure over the past 50 years (FAOSTAT, 2019).

This is recent history though; what if we look further back? Ruminant wildlife were prevalent in North America before European settlement. Although there are not accurate numbers for the buffalo, elk, deer, and other ruminants on the continent at that time, estimates are available. Based upon those estimates, these animals produced methane in the range of 50% less to 25% more than the current population of cattle, other farm ruminants and wildlife (Hristov, 2018). Thus, this indicates that cattle today are not contributing a substantial increase in the methane emissions from United States lands compared to pre-settlement times.

So what might be causing the increase in methane concentration in the atmosphere? Global estimates do indicate that cattle numbers on Earth have increased about 40% over the past 50 years (FAOSTAT, 2019). Methane is also released during the extraction, refining, and transport of fossil fuels. Natural gas is methane, and we have seen an increase in the production of natural gas within the United States in recent years (EIA, 2018). Leakage from oil and natural gas wells and during the distribution of natural gas are sources of increased emissions. This again is taking carbon that has been stored in the earth and releasing it to our atmosphere. This methane will also oxidize to form carbon dioxide, but this is not part of a natural cycle. This source adds new carbon dioxide to the atmosphere with very long-term effects (IPCC, 2013).

CAN CATTLE BE PART OF THE SOLUTION?

Depending upon the cost of dietary changes and supplements, these interventions may provide economic benefit to the producer through increased efficiency and productivity. In addition, there is the possibility of claiming carbon credits for this reduction. Companies and other institutions desiring to reduce their carbon footprint may be willing to pay dairy and cattle producers to use these mitigation practices to reduce emissions (Powers et al., 2009). This is largely in the future for now; we will wait and see how feeding technologies and the carbon economy play out.

So, although cattle in the United States are not contributing to the increase in global warming and related climate change we are experiencing, they may be part of the solution. Reducing any source of greenhouse gas emission will benefit our planet.