Productivity in agriculture can be defined as outputs per unit of input, with outputs including crop yields and animal protein production, and inputs including items like land and water. Over time, American agriculture has greatly increased its productivity, especially in the post-World War II era (Table 1).

How does productivity affect sustainability? Let’s use the data in Table 1 as an example. In 2016, the United States produced 25.2 billion pounds of beef and there were 92 million cattle (beef and dairy) on January 1st of that year. If we produced the same 25.2 billion pounds of beef in 2016 with 1945 efficiency, we would need a herd of 210 million beef and dairy cattle in the United States. What are the sustainability implications of 210 million vs. 92 million cattle? Even though the U.S. beef industry would still be providing the same amount of nourishment for people, we would have 118 million more cattle that would require feed and water, and beef production would likely generate more than twice the current amount of greenhouse gases.

Productivity improvements in plant and animal agriculture have worked together over time to reduce the amount of land and other natural resources required to produce animal protein. For example, U.S. beef’s productivity improvements have occurred in part due to the development of the corn-finishing segment of the industry that confines cattle for the last 4 to 6 months of their life in a feedlot where they are fed a diet that typically includes 50 to 85% grain (usually, corn). Grain-finishing cattle can help increase the total beef produced per animal and shorten the time it takes from birth to harvest as compared to beef production systems that do not finish cattle with grain-based diets. (See Does grass-finished beef leave a lower carbon footprint than grain-finished beef?)*

The total amount of corn grain fed per pound of beef will vary across beef production systems, but it is close to 2.6 pounds of grain per pound of beef.2 Using this ratio and given beef production in the United States in 2016, approximately 1.17 billion bushels of corn were required to produce beef. Considering 2016 average corn yields in bushels per acre, this was equivalent to 6.7 million acres of corn, which was 8% of harvested corn acres in 2016 or 0.3% of the land mass of the United States.3

However, if corn yields were at their 1945 levels, it would have required 35.6 million acres of corn – a 430% increase – to support U.S. grain-finished beef production. As this example illustrates, productivity improvements of plant and animal agriculture have worked together to reduce the amount of natural resources required to nourish people.

While a critique could be that agriculture now relies too much on inputs that may not be sustainable in the long term (e.g., fossil fuels, synthetic N fertilizer) to achieve these productivity gains4, the underlying increase in production has allowed more food to be produced now than in any other time in human history. According to the UN Food and Agriculture Organization, 31% more calories are available per person per day now than in 1961, despite the global population increasing by over 4 billion people.5

Figure 1. Pounds of beef produced per live cattle stocks by country across the world. “Live cattle stocks” refers to the number of beef and dairy animals in a country (including breeding stock) needed to produce the country’s beef output. The United States leads the world in this productivity metric (275 lb/live animal); whereas, the second largest beef producing country in the world, Brazil, produces 94 lb/live animal. Brazil is less efficient today than the United States was in 1945. Data source: UN Food and Agriculture Organization.5

Continuing these productivity trends around the world is part of an effort called sustainable intensification, which aims to increase agriculture production per unit of input (land, water, etc.), while also paying attention to important sustainability issues like biodiversity, food security, and animal welfare.6 Sustainably intensifying beef production around the world could dramatically reduce the number of cattle required to provide human nourishment and consequently the land, water, feed, and greenhouse gas emissions associated with producing beef globally.

For example, as is shown in Figure 1, the United States leads the world in beef system productivity. (See How does the carbon footprint of U.S. beef compare to global beef?)* Globally, 2.66 cattle are required and in Brazil 2.92 cattle are required to produce the same amount of beef associated with one animal in the United States. What does this mean for sustainability? Practically, these extra cattle required are analogous to idling cars and buses in our transportation system. They consume resources and produce pollution, yet they do not move anyone. Similarly, extra cattle create a burden on the natural environment, but do not provide human nourishment.

Why are there “extra cattle” around the world? It comes back to productivity. Other countries have beef systems that require more supporting cattle (cows, bulls, replacement heifers) due to poorer reproductive performance, herd health, genetics, and nutrition as compared to beef production in the United States. Additionally, cattle reach the point of harvest more quickly and at heavier body weights in the United States as compared to other countries around the world. Heavier body weights and shorter times to harvest translate into more beef produced per live animal.  Beef per live animal should not be confused with beef per slaughtered animal, as beef per live animal encompasses the entire beef and dairy herd within a country rather than simply just the beef produced per each individual animal slaughtered. For example, the United States produced 275 pounds of beef per live animal in 2016, but produced an average of 810 pounds of beef per slaughtered animal. What if the world could achieve current U.S. productivity levels? We would be able to produce the same amount of beef today with 975 million fewer cattle in the world. That’s a 62% decline in the global cattle herd. Alternatively, we could double global beef production while still decreasing the global cattle herd by 25% (Figure 2). 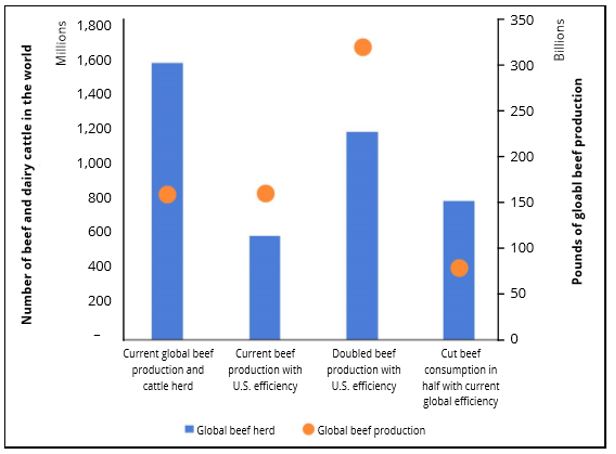 Obviously, the beef production system that works best within the United States would likely not be perfectly translated to another part of the world; however, productivity outcome goals such as increasing the amount of beef produced per live animal are not prescriptive. Myriad ways likely exist for cattle producers to achieve better outcomes in countries like Brazil or China that do not need to completely emulate beef production practices within the United States.

Productivity is a powerful, but sometimes forgotten tool when it comes to sustainability. Many analyses of the U.S. and global food systems suggest reducing consumption of animal-derived foods, such as beef, to reduce unwanted environmental impacts, like greenhouse gas emissions. However, most of these analyses ignore the dynamic nature of U.S. and global agriculture productivity changes and the fact that per capita consumption is a function of both food availability and population.

Bottom Line: Productivity is a powerful tool to improve the sustainability of food production, including beef, in the face of a growing population and increasing food demand. U.S. beef production is the most productive in the world, and the global impact of beef production could likely be dramatically reduced if other countries could achieve the same productivity as U.S. beef.