Tough Questions About Beef Sustainability:
How Does Beef Fit into a Sustainable Food System?

Much of the recent interest in sustainability regarding food is in response to a growing world population of increasing affluence that will lead to growth in global demand for food and animal protein specifically. Increases in food demand have led to concerns that we will be unable to meet the nutritional needs of future generations without causing serious environmental damage or exceeding the resource carrying capacity of earth.1

The UN Food and Agriculture Organization defines a sustainable food system as “a food system that delivers food security and nutrition for all in such a way that the economic, social and environmental bases to generate food security and nutrition for future generations are not compromised.2” Discussions related to the sustainability of our food system sometimes include arguments to reduce or abandon animal proteins with a particular focus on beef, because of its higher environmental footprint relative to other foods.3, 4 While environmental footprints (e.g., water and carbon footprints) are useful tools to benchmark the sustainability of an individual food industry or commodity, like beef, they are also unable to capture all the relevant components of a sustainable food system.

Multiple factors important to a sustainable food system that are not captured in environmental footprints include:

The unique biology of cattle contributes both to beef’s role in a sustainable food system and its environmental footprint.

Beef cattle are ruminant animals, which means they have a specialized stomach that contains four compartments. The largest of these compartments is called the rumen (hence, ruminants), which is home to trillions of microscopic bacteria, protozoa, and fungi. The trillions of microorganisms in the rumen of cattle and the host animal have a mutually beneficial relationship. The microbes are provided a warm, moist environment and a constant food supply from the feeds, enabling access to nutrients within the feeds that would otherwise be indigestible without the actions of the microorganisms.

Because of the unique biology of cattle, they fill an important role in our food system and the U.S.  bio-economy by using human-inedible feeds or eating things that people cannot (Figure 1).9 Human-inedible feeds for cattle include the plants cattle eat on range and pasture lands unsuitable for cultivated agriculture (e.g., the 770 million acres of rangeland10 in the United States), and byproducts from the biofuels, fiber, and human food industries. By using byproducts that would otherwise go to waste, cattle are enhancing the sustainability of other industries. For example, cattle eat distillers grains from the corn ethanol industry, cottonseed that is a byproduct of cotton production, and beet pulp that is a byproduct of sugar beet production. 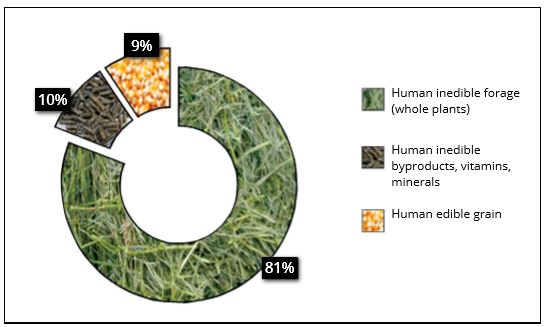 Figure 1. Life cycle feed intake of a grain-finished beef animal in the United States.9 Over 90% of the lifetime feed intake of beef cattle is not in competition with the human food supply.

The relative difference in the human nutritional value of the feeds cattle eat versus the human nutritional value of beef can be substantial. This means cattle are acting as “upcyclers” in our food system: rather than simply recycling, cattle are upgrading human inedible plant proteins and food waste into high-quality protein and essential micronutrients, such as B vitamins. In some U.S. grain-finished beef production systems, more human-edible protein is generated in the form of beef than cattle consume in the form of feed (Figure 2).6 Even when cattle are consuming human-edible feeds, such as corn grain, they are upgrading plant proteins to more complete and digestible proteins for humans. For example, the digestible indispensable amino acid score of beef is 2.6 times greater than corn grain,11 because the protein in beef is more bioavailable and contains a balance of the essential amino acids humans must consume in their diet. 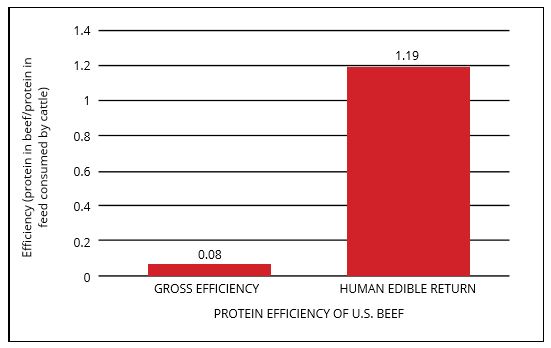 One of the costs of the upcycling service provided by cattle is the production of methane from the rumen by microorganisms. Methane is a greenhouse gas 28 times more potent than carbon dioxide at trapping heat in the earth’s atmosphere on a 100-year time scale.12 The methane naturally released from the mouths of cattle, called enteric methane, contributes a substantial portion of the total greenhouse gas emissions produced by beef cattle. Enteric methane emissions make up 47% of the total carbon footprint of beef from grass-to-consumer’s plate13 and represent 1.8% of the total greenhouse gas emissions in the United States.14 Improved production efficiency has increased the amount of beef produced per animal, and led to decreases in enteric methane emissions from beef cattle over time. Compared to 1975, enteric methane emissions from U.S. beef cattle were 34% lower15 and U.S. beef production was 1% higher in 2014.16 While researchers at Land Grant Universities are exploring ways to practically and cost-effectively further reduce natural emissions of enteric methane, it is important to recognize that methane production is the tradeoff of the sustainable service of upcycling that cattle provide.

Bottom Line: Beef cattle play a unique role in a sustainable food system by upcycling – they consume plants and byproduct feeds of lower value and upgrade them to high-quality protein. Additionally, cattle can graze and consume feeds that are grown on land that is unsuitable for cultivation, thereby expanding the land base available for food production.