Tough Questions About Beef Sustainability:
How Does Upcycling Relate to Beef Production?

Upcycling is known as the process of reusing old or discarded materials and turning them into a product of higher value or quality. Upcycling bounces off the popular concept of “reduce, reuse, recycle” to create something of higher quality without sending the item to a landfill. The most commonly thought of examples of upcycling bring to mind the refurbishment of vintage furniture or home renovations, which are seen on popular HGTV shows, such as “Fixer Upper,” and Pinterest do-it-yourself boards. A common example of upcycling involves turning old shipping pallets into outdoor furniture, end tables, planter boxes, or even bed frames.

Regardless of popular trends and social media fads, cattle have been upcycling long before society adopted use of the term. Cattle upcycle low-quality human-inedible feeds, that some other animals or humans cannot consume (i.e., forages), and convert them into a high-quality, high-protein product in the form of beef (Fig. 1). 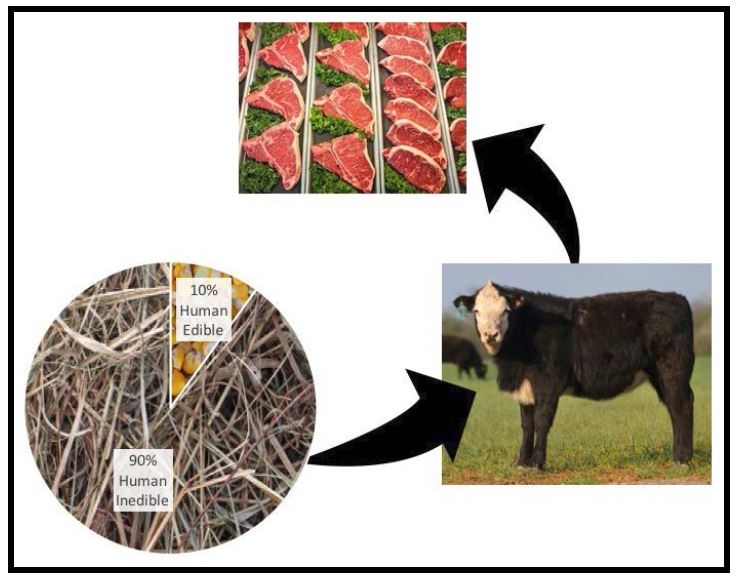 The unique ruminant digestive system gives cattle the ability to consume and gain nutritional value from feeds that other animals or humans cannot consume. The four-compartment stomach of a ruminant is home to trillions of microbes that share a symbiotic relationship with the animal and allow ruminants to benefit from low-quality feeds that other animals would not be able to eat. For example, the cellulose in forages is indigestible to humans; however, microbes living in the rumen compartment of the stomach are able to break down carbohydrates and provide a source of energy to the animal.

In the US, 90% of the feed consumed throughout the lifetime of grain-fed cattle is human-inedible (NASEM, 2016), and cattle consume a number of different feeds that classify them as upcyclers. Inadequate for growing crops for human consumption, the 800 million acres of rangeland grazed by cattle comprise 35% of the United States (USDA ERS, 2018). Cattle consume by-products from the biofuel and food industries, such as distillers grains and wheat middlings, which are by-products of the ethanol production process and wheat flour milling process, respectively. Use of these by-products as cattle feed decreases the respective industry’s waste by providing an alternative use of the by-product compared to sending it to a landfill.

Cattle produce more than meat and contribute key by-products to society. Of the animal’s live weight, 42% is edible beef, and 44% produces numerous by-products (Marti et al., 2011). Cattle by-products are components of many items from leather to pharmaceuticals and cosmetics to pet food. Properly managed cattle grazing can improve rangelands and wildlife habitats, which are some of the ecosystem services cattle provide.

Additionally, beef in the diet provides essential micronutrients (e.g., Niacin, Vitamin B-12, riboflavin, iron and zinc; Table 1) that can be difficult to obtain in adequate quantities from plant food sources alone. Animal proteins have a higher value than plant-based proteins in human diets due to higher digestibility and superior amino acid compositions (CAST, 1999). Protein quality is an important aspect to consider when comparing plant and animal-based dietary sources, and animal proteins often offer twice the value of edible plant-based proteins in human diets (Ertl et al., 2016). Animal products in human diets provide an important source of energy and protein and have been shown to improve growth and development in children (CAST, 1999).

Ruminants serve a valuable role in the conversion of feeds grown on non-arable lands into human-edible protein and by-products into products suitable for human consumption (Oltjen and Beckett, 1996). Utilizing cattle and their upcycling capabilities provides benefits to society, the land and the sustainable production of livestock.

Bottom Line: Cattle consume low-quality human-inedible feeds other animals or humans cannot and convert them into a high-quality, high-protein product in the form of beef. Beef also provides essential micronutrients and other key by-products to society. Cattle have been upcycling long before it was trending on social media. 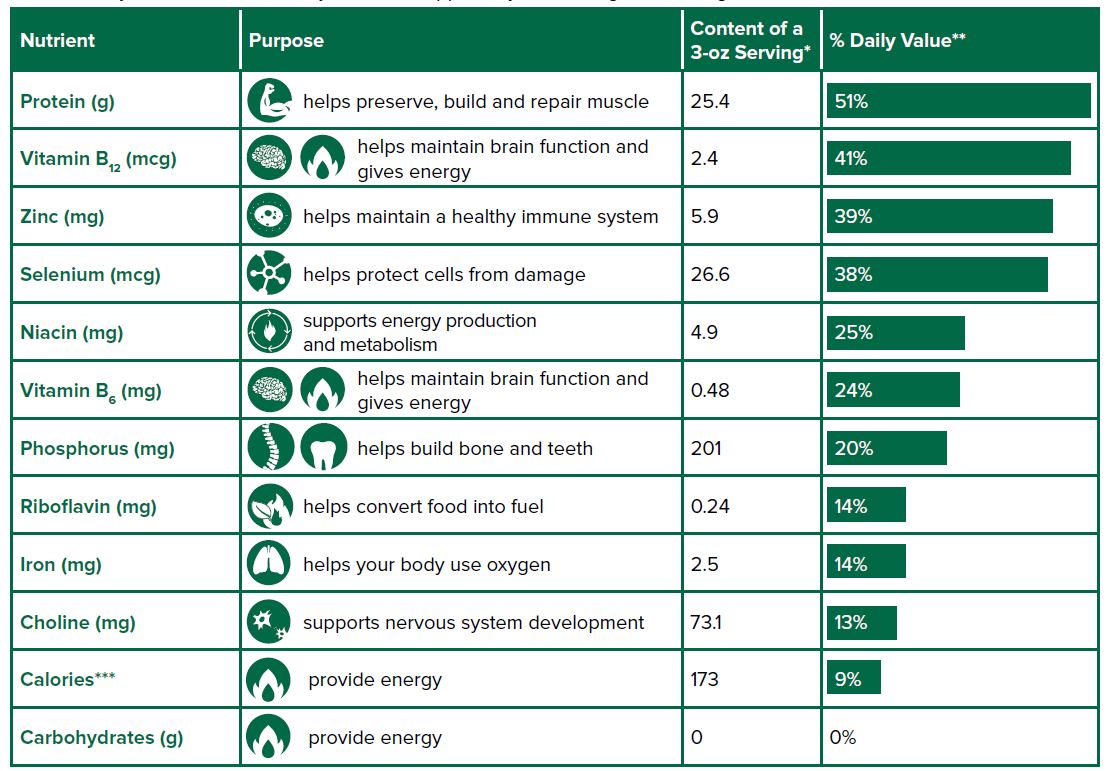 *Nutrient content of a 3 oz serving of beef is based on the Reference Amount Customarily Consumed (RACC) of beef established by USDA. USDA National Nutrient Database for Standard Reference, NDB# 13364. **DV refers to Daily Value, the amount of a nutrient needed for a healthy adult on a 2,000-calorie diet. The %DV is the percent of a nutrient’s DV supplied by a particular food. ***Percent of calories is based on a 2000-calorie daily diet.