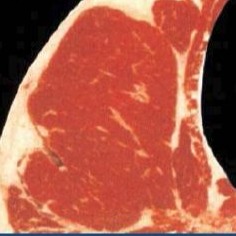 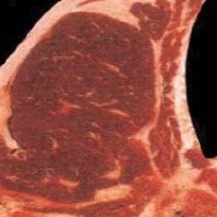 Beef characterized as dark cutting will have an abnormally dark purplish red to black colored lean as shown in Figures 1a and 1b. Darkcutting beef is most often known as dark, firm, and dry (DFD). DFD beef can also be called “high pH” beef as a result of an animal’s depleted muscle glycogen reserves prior to slaughter. The carbohydrate (sugar) glycogen is used as an energy source for muscle contraction and relaxation. Lactic acid is a by-product of glycogen utilization by the muscle when energy is produced in a stress event. After death, lactic acid accumulation in the meat is responsible for the pH decline from 7.0 to about 5.7 (Figure 2) during normal rigor mortis development.

Consequentially, the normal pH decline of meat during rigor mortis is altered due to a lower level of glycogen at death resulting from stress on the animal prior to harvest, which results in meat retaining a high pH. DFD beef exhibits a dark, purplish red to almost black lean color and a dry, often-sticky lean surface. Due to high pH, lean surfaces act similarly to a dry sponge resulting in increased water binding capacity within the muscle.

The muscle appears dark because of higher intracellular water, which reflects less light. The higher pH results in less denaturation of myoglobin and would facilitate a higher level of aerobic metabolism at the surface. In addition, the high pH actively holds iron in the reduced (ferrous) state. The muscle is firm due to the high-water holding capacity, and the surface feels dry as the water is tightly held within the muscle. 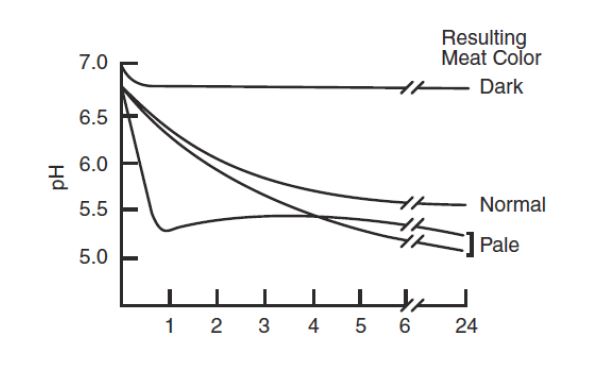 What events lead to Dark, Firm and Dry

Beef In cattle that are rested and not exposed to stress, muscle glycogen levels will be 0.8% to 1.0% prior to death.

However, an animal exposed to various forms of long-term pre-slaughter stress significantly depletes its glycogen reserves. A depleted state of glycogen less than approximately 0.6% will hinder normal postmortem pH decline. Muscle with a post-rigor pH of greater than 5.9 generally develops some form of darkcutting characteristic. The pH range of normal meat of an unstressed animal is 5.4-5.7. DFD meat will have a much higher pH of 5.9-6.5, with some meat being as high as a pH of 6.8.

Normal muscle blooms to a bright red color when exposed to air (Figure 1 b). Muscle with the dark cutting condition will not bloom to a bright red color and remains a dark purple red to black in color (Figure 1 a). The dark red state of DFD meat in a retail display case has proven to be one of the leading causes of consumer rejection of dark cutting beef. Consumers relate the dark colored lean to meat from an old animal, spoilage, undesirable flavor, toughness and poor shelf life. The extreme undesirable nature of dark cutting beef has resulted in the U.S. Department of Agriculture enforcing strict grade standards that impose stringent discounts on dark cutting carcasses. The discounts given to dark cutting carcasses have become a major issue to packers and producers alike. The discount is realized to the packer when cattle are purchased on a live basis and realized by the producer when animals are sold on a carcass basis. According to the 2000 National Beef Quality Audit an estimated 2.3% (Figure 3) or 697,130 head of cattle slaughtered in 2000 produced DFD carcasses. USDA Agricultural Marketing Service reported the discount for dark cutters to be $30 per CWT (100 lbs). Therefore, a $164,592,393 loss to the beef industry or $5.43 per fed steer and heifer harvested in 2000 was realized.

Dark, firm and dry beef is of significantly lower quality as it has a reduced shelf life and a greater ability to support microbial growth. Increased microbial growth leads to increased spoiloge and an undesirable flavor. Reduced shelf life is largely due to a higher than normal pH and an increased water-holding ability, which are both conducive to microbial growth. Decreased levels of muscle glycogen lead to overall limited amounts of glycogen in the meat that can be converted to lactic acid. Lactic acid bacteria normally grow on meat and “compete” with spoilage causing bacteria. The reduction in glycogen, utilized by lactic acid bacteria, leads to a substantial decrease in lactic acid bacteria. Therefore, bacteria that produce hydrogen sulfide, which causes an off odor and green discoloration, proliferate and become numerous. It has been noted that dark-cutting beef consumed prior to spoilage has been regarded as having a slightly soapy off-flavor. However, the consumption of DFD beef is as safe and nutritious as normal beef.

What Are the Incidences and Causes of Dark, Firm and Dry Beef?

There are a variety of factors that result in animal stress. When stress factors are coupled with extreme or changing weather conditions, the animal’s stress levels are severely increased and its chances of producing DFD beef also increase. The occurrence of DFD in grain-finished cattle normally ranges from 1.5% to 5%. However, in extreme circumstances, it is possible for a particular group of cattle to exhibit 65% to 75% DFD carcasses. It has been established that young bulls most often display DFD characteristics because of aggressive behavior. Cattle stress factors include, but are not limited to; biological type, implant strategies, geographical origin, mounting behavior (bullers), environmental conditions, temperature, relative humidity, wind, mixing of unfamiliar animals and carrying of cattle overnight at the slaughter plant. One or a variety of the above factors can contribute to the development of DFD meat.

Perhaps the most common stresses are mounting behavior and the mixing of unfamiliar animals. The mixing of unfamiliar animals, especially bulls, leads to increased mounting and aggression. This behavior increases physical activity, hence, depleting muscle glycogen. Secondly, young bulls are generally more aggressive and tend to have a higher incidence d DFD carcasses. Heifers in estrus generally tend to exhibit a higher percentage of dark, firm and dry lean due to the expression of breeding behavior.

Furthermore, adverse or fluctuating weather conditions, such as extreme temperatures, increase the stress level of an animal. The addition of precipitation or high winds can also raise the level of stress an animal can incur. It has been found that an average temperature above 35°C (95°F) over a period of 24-48 hours can drastically increase animal heat stress (panting) and therefore cause DFD carcasses. Temperatures of a freezing nature (<0°C) for 24 to 48 hours before slaughter can also contribute to an animal’s cold stress (shivering). Heat stress may be lessened with shade. The highest incidence of DFD carcasses has been shown to occur in the fall months when temperatures fluctuate frequently. Weather patterns in September and October fluctuate between warm, mild days to cold, windy and/or wet conditions. This dramatic fluctuation tends to occur in a short time period leaving the animal little time to acclimate.

Today’s beef cattle breeding utilizes numerous breed types to take advantage of the heterosis and complementarity of crossbreeding. It has become apparent that some stress factors may relate to biological type or breed.

Research has shown that Bos indicus or Brahman influenced cattle tend to acclimate to high heat stress levels more so than Bos taurns cattle (Cook 1998). This may be reversed if Bos indicus cattle are placed in a cold environment. Mixing of cattle from different locations also increases the chance for DFD carcasses. Animals from different origins tend to “fight and ride” to establish a new “pecking” order. Therefore, it can be stated that mixing of cattle prior to slaughter significantly increases the chances of DFD meat (Cook 1998).

Utilization of growth promotants or implants has become a vital part of the overall management decisions of producers. Particular implant strategies have been shown to increase DFD carcasses. The type of implant utilized and when it is administered is extremely important as the implant may alter the animal’s hormonal balance and increase stress levels. Certain analogs of testosterone have been implicated in an increase in DFD carcasses. It is important to evaluate an implant strategy for possible secondary outcomes such as DFD, due to hormonal balance changes. The flowchart below (Figure 4), (Cook, 1998) denotes a system of DFD incidence according to type of implant strategy utilized. The study was performed using 272,936 head of cattle. In each category, the number of animals producing a DFD incidence is stated per 1000 head.

Dark, firm, and dry carcasses contain lean with dark, purplish red to black color with a high pH and water holding capacity. Consumer rejection of dark meat is the leading problem facing DFD carcasses. Furthermore, an increased incidence of spoilage and reduced shelf life poses yet another problem. It has become apparent that reducing stress levels through appropriate management decisions can drastically reduce DFD carcasses. Therefore, cattle must be monitored throughout feeding, implanting, penning, processing, transporting and holding prior to slaughter. If proper steps are taken to minimize stress and allow for acclimation and rest after a stress event, then the incidence of DFD carcasses will drastically decrease. Nonetheless, identification of animals that have a greater risk of incurring stress and preventing its occurrence remains to be a challenge for the industry.

Cook, T. W. 1998. Factors Contributing to the Incidence of “Dark-Cutting” Condition in Beef Carcasses and Management Strategies to Prevent Reductions in Value as a Result of their Occurrence. Master’s Thesis, Texas Tech University, Lubbock, Texas.

Eagan, A.F., and B.J. Shay. 1998. The effect of pH on the microbiology and storage life of vacuum-packaged meat. Proc. Australian Workshop on Dark-Cutting in Cattle and Sheep. AMLRDC, Sydney South. NSW.