Modernization of the U.S. Standards for Grades of Carcass Beef

Over 95% of U.S. fed steers and heifers are less than 30 months of age (MOA) based on dentition assessments at the time of harvest and, according to USDA standards, cattle 9 to 30 MOA are expected to produce A-maturity carcasses (McKeith et al., 2012). Occasionally, however, cattle known to be less than 30-months old exhibit premature skeletal ossification causing them to be classified as B-maturity or older using today’s grading system. This not only reduces their final carcass quality grade but also limits their marketability and lowers their value in U.S. beef trade (Tatum, 2011). Differences between chronological and physiological ages are not accounted for with the skeletal maturity evaluation system used in U.S. quality grading today. The divergence between chronological and physiological age is most pronounced in heifer carcasses.

Per Acheson et al. 2014, increased animal age is associated with reduced beef tenderness (Hiner and Hankins, 1950; Tuma et al., 1963; Shorthose and Harris, 1990). However, when comparing steers and heifers less than 30 months, animal age has been shown to have little effect on longissimus muscle tenderness (Field et al., 1966; Arthaud et al., 1977; Bouton et al., 1978; Waggoner et al., 1990). Since much of this data was collected more than 20 years ago and because of a lack of available research related to beef tenderness and dentition of cattle less than 30 months of age, the beef checkoff engaged in new research to evaluate the relevance of current skeletal maturity assessment.

Although many U.S. cow-calf producers record individual birth dates for each year’s calf crop, cattle often are transferred from producer to packer without documentation of actual animal age (USDA, 2005). Therefore, carcass indicators of physiological maturity are considered when assigning USDA quality grades to beef carcasses in an effort to reflect age-related differences in beef tenderness and predict eating quality.

Carcasses of all cattle processed in U.S. federally inspected beef plants currently are segregated (under the supervision of USDA-FSIS) into two age groups based on dentition. This has been done since 2004 to verify ages of cattle (<30 months vs ≥30 months) in an effort to prevent human exposure to bovine tissues (specified risk materials) that could contain the infective agent (prion) that causes bovine spongiform encephalopathy (BSE; Tatum, 2011). Carcasses produced by cattle with fewer than three permanent incisors are classified as less than 30 MOA, whereas carcasses from cattle with three or more permanent incisors are classified as 30 MOA or older. After chilling, these two groups of carcasses are graded and fabricated separately; however, dental age is not considered when USDA quality grades are assigned in a beef plant. Instead, USDA graders utilize carcass indicators of skeletal and lean maturity to classify carcasses into maturity groups designated A through E (USDA, 1997). These are only physiological indicators of chronological age and include assessments of ossification of the bones and cartilages (referred to as buttons) along the vertebral column of the split carcass. Premature ossification can make evaluation of these indicators inaccurate.

Support Data A recent study, funded by the beef checkoff, evaluated the relationship between USDA carcass maturity and eating quality of strip loin steaks produced by fed steers and heifers (n=450) that had been classified as less than 30 MOA using dentition (Acheson et al., 2014).

Results of this study showed that trained descriptive sensory panelists were unable (P > 0.05) to detect any differences in tenderness, juiciness or flavor between steaks from carcasses less than 30 MOA classified by USDA graders as A-maturity and steaks from carcasses classified by graders as either B- or C-maturity. Moreover, tenderness, measured using Warner- Bratzler or slice shear force instrumental measures of tenderness did not differ (P > 0.05) between maturity groups (Acheson et al., 2014). Just like sensory attributes and shear force measurements, collagen solubility did not differ from A- and B-C maturity carcasses originating from grain-finished cattle classified as less than 30 MOA (Tatum, 2013). This is similar to previous findings such as in Field et al. (1997) where authors concluded that maturation of collagen in muscle was independent of changes in skeletal maturity. These findings and those in other previous literature challenge the fundamental grading concept of using skeletal maturity assessments to reflect differences in intramuscular collagen maturity and associated differences in tenderness of carcasses from grain-finished steers and heifers (Tatum, 2011). 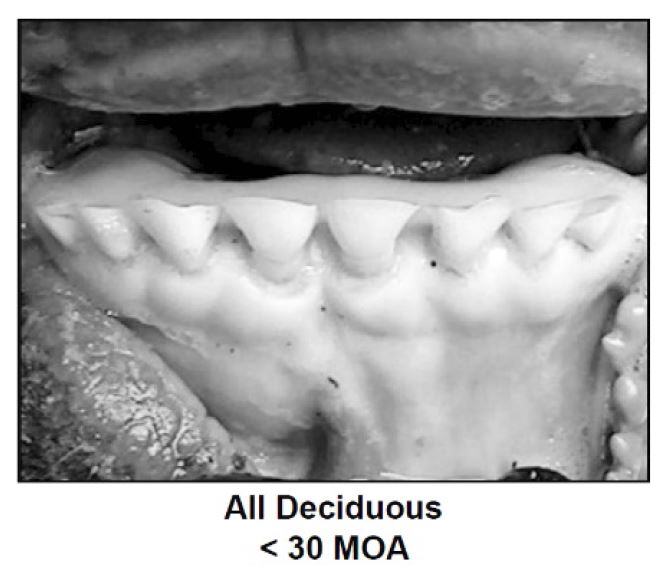 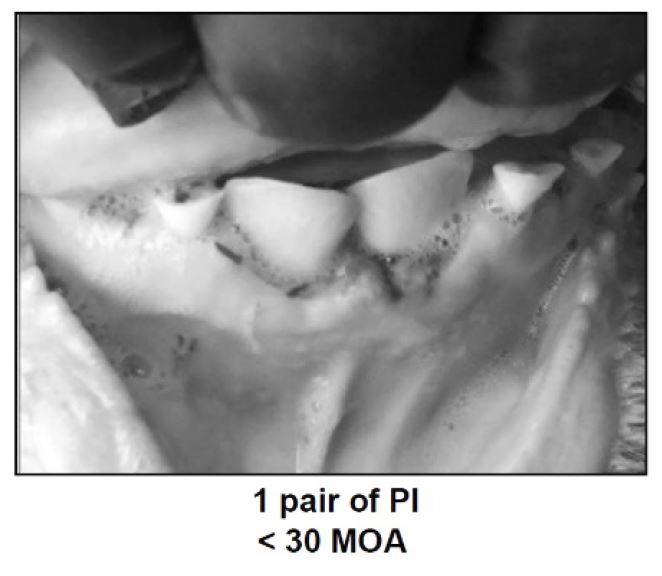 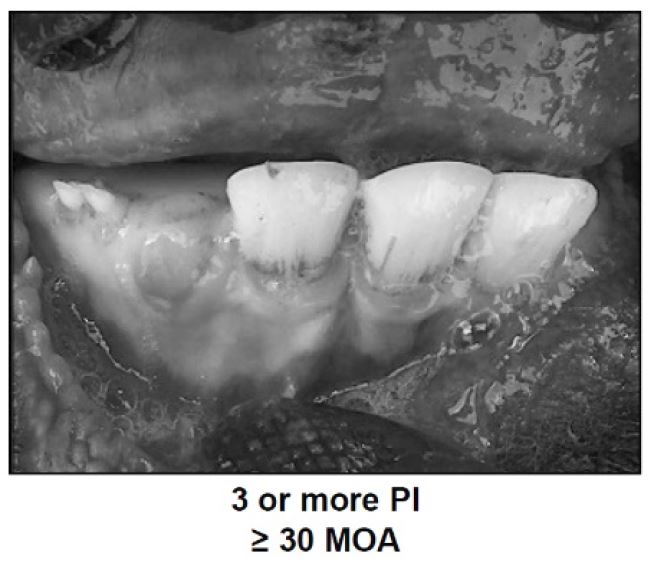 To add to these findings, a second checkoff study was conducted to determine the effects of USDA maturity classification on beef tenderness, juiciness and flavor when applied to carcasses of steers and heifers (n=600) in both dental age groups: less than 30 MOA and 30 MOA or older (Tatum, 2015). Results of this second study were consistent with the findings of the first and showed that USDA maturity classification (A vs. B-D maturity) was not (P > 0.05) associated with any detectable differences in tenderness, flavor or juiciness in either dental age group. Advanced dental age (≥ 30 MOA), however, was associated with greater (P < 0.05) incidence of grassy and livery off-flavors. In addition, dental age interacted with marbling to affect beef tenderness. Among steaks with Slight marbling, those originating from cattle less than 30 MOA were more tender (P < 0.05) than steaks produced by cattle 30 MOA or older. Dental age did not affect (P > 0.05) tenderness within the Small and Modest-Moderate marbling categories.

Current maturity evaluation procedures as reflected in the Standards were implemented based on a study involving 1,005 head of cattle back in 1980. These two new and robust studies included 1,050 head representing the full age, sex and grade mix of fed cattle available today. The statistical power of these studies is such that additional studies are not warranted at this time.

Results of these checkoff studies provide science-based support for any future modernization of the U.S. Standards for Grades of Carcass Beef that would include dentition and/or age documentation as alternative methods for current determination of carcass maturity and assignment of cattle less than 30 MOA to the A-maturity category for USDA Quality Grading. Science supports including in the A maturity category cattle known to be less than 30 MOA based on dentition or age records regardless of evidence of skeletal maturity because these maturity indicators can be influenced by factors that speed up signs of ossification resulting in unnecessary devaluation of these carcasses. Moreover, this research proves dentition to be a better indicator of carcass chronological age and of ultimate tenderness of cooked beef products. Dentition is already used in place of skeletal ossification in other global grading systems such as those in Australia and South Africa (Strydom, 2011).

To determine estimated economic impact, data from major processors were collected on more than 15.5 million head representing the total mix of today’s cattle supply and representing the year from May 2014 through April 2015. From this data, it is estimated that a grading modernization would shift approximately 1% of the total number of fed steers and heifers into the graded beef population versus into no roll beef. As of mid-October 2015, the average discount per head (assuming an 850 lb. carcass average as of 10-17-15) for Hardbones is $276.25 ($32.50 per cwt). Considering this discount applied to 1% of 15.5 million head in this data set, this represents more than $42.8 million in lost revenue for beef producers each year. If extended to 1% of the total number of fed cattle harvested in the U.S. each year, this figure is much higher. The number of carcasses impacted is relatively small, but the potential return to the industry for tender, juicy and flavorful beef is significant. 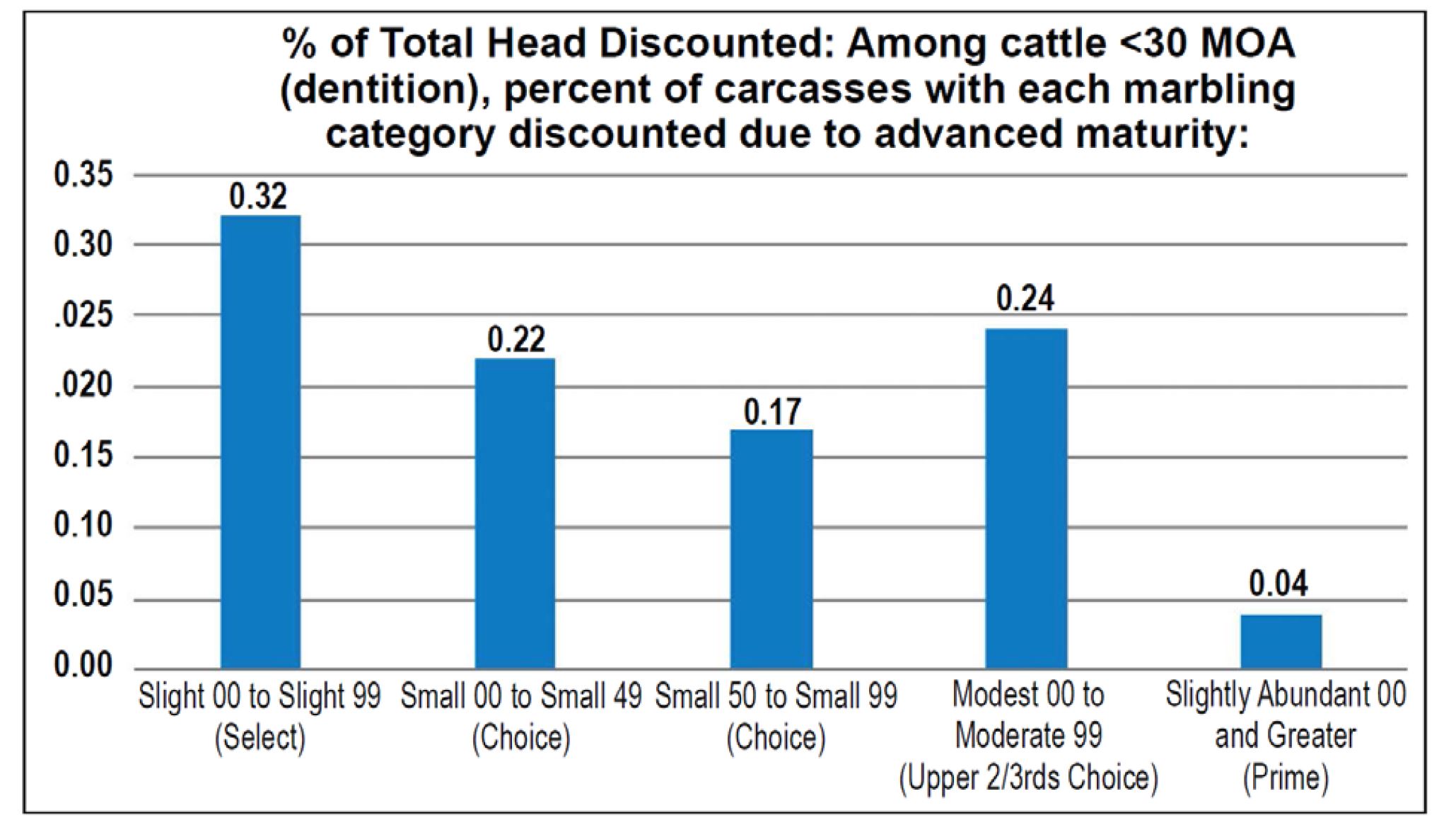 Different marbling scores or grades would be impacted differently as illustrated in Figure 1. Both steers and heifers can exhibit these signs of advanced physiological maturity even if they are known to be less than 30 months of age. In neither case is eating quality negatively impacted based on most recent science. However, skeletal maturity can be accelerated by high levels of estrogen, so heifers typically exhibit more advanced skeletal maturity than do steers of the same age. Beef carcasses produced by heifers are more likely to be classified as B-maturity or older than are carcasses produced by steers when the two sexes are compared at a common age. As a result, heifers 16- to 27-months old are about seven times more likely to produce carcasses with B-maturity skeletal characteristics and almost 11 times more likely to produce carcasses with C-maturity or older skeletal characteristics than 16- to 27-month old steers (Tatum, 2011).

Because heifers generally are lighter in weight, this could have a potential positive effect on weight of carcass and subprimals by shifting more heifers into the graded mix versus into the no roll category.

Science ensures quality will not be compromised if grade standards were modified. Old, tough carcasses will not be lumped in with young, tender carcasses. The USDA Standard dictating the value of beef carcasses can be constantly evaluated for improvements to ensure it is current and relevant based on the best data available. This science demonstrates dentition is a better indicator of chronological age than ossification and ensures that product quality will not be compromised. Dentition evaluation is already in place in U.S. plants with USDA-FSIS oversight.

Tatum, J.D. 2015. Project summary: Effects of USDA carcass maturity on eating quality of beef from fed steers and heifers that have been classified into age groups using dentition. Funded by the beef checkoff. http://www.beefresearch. org/CMDocs/BeefResearch/PE_Project_Summaries/FY14_ Effects_of_USDA_Carcass_Maturity_on_Eating_Quality.pdf

USDA. 2005. Final report to the government of Japan on the USDA maturity study: Determining the relationship between chronological age and physiological age in the U.S. fed beef population. http://www.ams.usda. gov/?dDocName=STELDEV3097778