Understanding the Different Kinds of Beef in the Marketplace

Although precise data are not available, the vast majority of beef sold in the United States today is from animals raised using conventional production practices. Some research shows that about 99 percent of beef in major retail supermarkets is from conventionally raised grain-fed cattle.

Conventional beef (also called grain-fed or grain-finished) is from cattle that spend most of their lives grazing on grass in pastures but are ‘finished’ for the last 120-200 days in a feeding operation where they receive a scientifically formulated diet of grain, roughage and nutrient supplements. Conventionally raised cattle, whether on pasture on in a feeding operation, may be given antimicrobials to prevent diseases and to treat disease if they become ill. These cattle also may be given small amounts of hormones to replace those their bodies do not produce because they have become steers (non-intact male cattle). This helps them grow more efficiently and reduces methane produced by enteric fermentation.

But consumers today have options when it comes to their food and how it’s raised. For those consumers who have shown a preference, beef producers have responded by changing production methods to provide additional choices — natural, grass-finished and organic beef. It is important to understand, however, the true differences among these production methods, and the beef they generate.

When it comes to safety and nutrition, there are no significant differences in the beef from animals raised in these different ways. Beef from conventionally raised cattle is basically the same as beef from animals raised in grass-finished (also called grass-fed), natural or organic operations. The difference is in the ways the animals are raised, as well as the way the beef is marketed to consumers.

The U.S. Department of Agriculture (USDA) has a specific definition for natural and specific requirements for organic beef. Based on the government’s criteria, nearly all fresh and frozen beef found in the supermarket is “natural,” meaning minimally processed and free of additives such as preservatives, artificial flavors and colors. However, the term has taken on additional meaning for some beef marketers and consumers.

For example, some marketers may use the term natural beef in reference to beef raised without use of antimicrobials and with no additional hormones. Others may use the same term to describe grass-fed or grass-finished (grass-finished cattle usually spend their entire lives on pasture).

Beef labeled “certified organic” is from animals whose production must meet a set of USDA standards. These include not being allowed to receive any antibiotics or growth promotants, and being fed only organic grass or grain. Certain vitamin and mineral supplements are permitted, as are vaccines to keep the livestock healthy. Both naturally raised and organically raised cattle may be finished in feeding operations but, in the case of organic, they must have access to pasture and be fed only organic feedstuffs.

According to the Federation of Animal Science Societies (FASS, 2003), the USDA’s National Organic Program (NOP) for meat, milk and eggs is a marketing program, not a food safety or food healthfulness program. In addition, USDA NOP regulations do not address the nutritional content of foods, food safety or animal wellbeing.

Marketers of natural, grass-finished and certified organic beef usually identify the practices that are, or are not, employed in their production on product labels. These production practices do not make the beef safer or more nutritious.

It is highly unlikely that microbiological quality would be different among conventional, natural, grass-finished and organic beef processed in state or federally inspected plants (Smith et al., 2005). In fact, the entire industry has made great strides in reducing the incidence of E. coli in ground beef samples. The Food Safety and Inspection Service (FSIS) found that the percentage of E. coli O157:H7-positive ground beef samples collected in 2004 fell by 43.3 percent when compared to 2003 and declined 80 percent between 2000 and 2004. Data from 2005 and 2006 show E. coli levels in ground beef remain low, with just 0.17 percent of samples testing positive in each of the previous two years. Through the fall of 2007, the percent of samples testing positive increased to 0.23 percent. While still a small percentage of total product, it represented a 35 percent increase over 2006.

Research has not found Bovine Spongiform Encephalopathy (BSE) infectivity in beef muscle or milk. In addition, the safeguards in place protecting both animal and human health from this disease apply to all types of beef production systems. The 1997 feed ban, for example, was implemented by the Food and Drug Administration (FDA) to prevent the spread of BSE by banning the use of feed ingredients that can carry the BSE agent. These feed regulations protect all U.S. cattle equally, regardless of whether they are raised in a conventional, natural, grass finished or organic production system.

Like humans or pets, when calves or cattle become sick with a bacterial infection, they are given therapeutic doses of antimicrobials. Medicated feed containing small amounts of antimicrobials also sometimes is used to prevent diseases such as bacterial scours, liver abscesses and shipping fever. The practice keeps animals healthy. Healthy animals feel better and are likely to eat more, converting that additional feed into nutritious beef.

There is concern that use of antimicrobials in animals contributes to the development of antimicrobial-resistance that could affect human health. However, a significant body of research shows this is not the case.

Research by LeJeune and Christie (2004) suggests there is no difference between conventional beef and beef from animals raised without antibiotics for certain antibiotic-resistant organisms or multidrug resistant pathogens. Other researchers have also found that using certain antibiotics does not adversely affect the safety of the food supply (Hurd et al. 2004).

An Institute of Food Technologists (IFT) expert panel (Comprehensive Reviews in Food Science and Food Safety, 2006) concluded that focusing on antibiotic-resistant strains in food animals specifically would have far less impact on foodborne illnesses than applying interventions to control foodborne pathogens in general.

Another panel (Phillips et al., 2004) concluded that “(w)hat has not happened in 50 years of antibiotic use in animals and man, seems unlikely to happen at a rapid rate now.”

The National Cattlemen’s Beef Association (NCBA), a contractor to the Beef Checkoff, in 2004 developed “A Producer’s Guide For Judicious Use Of Antimicrobials In Cattle” for inclusion in national, state and local Beef Quality Assurance (BQA) programs. Although science does not show human health is affected by any use of antimicrobials in cattle production, producers developed these guidelines to assure that antimicrobials are used in ways that minimize any potential risk.

Growth promotants, most of which are naturally-occurring hormones (e.g., estrogen, testosterone, progesterone), are given in small doses to some cattle to promote growth of muscle and reduce fat deposition. The practice reduces the amount of resources required to raise cattle and helps produce the lean beef products consumers demand while keeping prices lower. In reality, growth promotants can be thought of as hormone replacement, since bulls and implanted steers (non-intact male cattle) gain at about the same rate. When used, these growth-promoting substances typically are administered in implant form as a tiny pellet placed under the skin on the back of the cattle’s ear. The active compound dissipates during the treatment period of about 80 days (depending on the specific type/kind of implant). It is important to note that all growth promoting products are subject to a stringent FDA review process which typically requires years before approval is granted. Sponsoring companies devote significant time and financial resources in research that must prove the product’s efficacy and safety (both for cattle and humans) both prior to and following FDA approval. 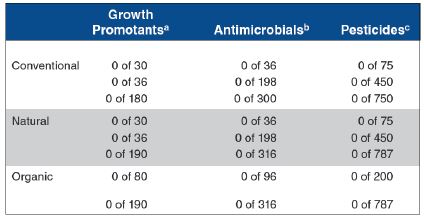 Like humans, most food animals and plants naturally produce hormones and the use of growth promotants in cattle does not create any meaningful increase in hormone levels in beef (Table 1). Two of the world’s foremost animal endocrinologists (Niswender, 2005; Veeramachaneni, 2005) believe concentrations of androgens, estrogens or progestins (natural or artificial) in beef (from cattle that were or were not implanted) are so low that there is no effect on human health associated with consuming any type of beef.

This includes any effect on puberty in children. While some research has shown girls may be reaching puberty at younger ages, there is no link between this condition and their consumption of beef from cattle given growth promotants.

Researchers have suggested a wide range of cause for earlier puberty including findings that “estrogen mimics” (environmental chemicals that resemble estrogens) (Silberstein, 2001) or “endocrine disrupters” (which disrupt proper development and function of our bodies) (Weise, 2005) may be at fault. Other research shows strong correlations between early puberty and obesity in children.

Although marketers have a right to promote the way their beef is produced and to say their beef is from animals that have never received growth promotants, all beef contains small amounts of naturally occurring hormones and science shows the hormone levels in all types of beef are safe.

Results of the most recent NRP (FSIS-USDA, 2005) revealed that the incidence of violative chemical residues in all kinds of beef is very low, but specifically, no concerning residues of the synthetic hormones used in growth promoting products were identified. Furthermore, a product label implying meat from “animals raised free of chemicals” is misleading, since even the air animals breathe is a natural mixture of chemicals. Water they drink also is a chemical (H2O), and foods any animal consumes will contain naturally occurring chemicals.

Three studies (Table 1) have shown that violative levels of residues of growth-promoting implants, antimicrobials and pesticides are no more likely to occur in beef from conventionally produced animals than in beef from animals produced/managed to comply with “natural” production restrictions or organic standards.

The USDA Pesticide Data Program collects and analyzes more than 100,000 food samples each year, 3,400 of which are beef and chicken. Each year, less than 1 percent of samples collected have residue levels greater than tolerances established by the Environmental Protection Agency (EPA) – and the residues are more abundant in fresh fruits and vegetables than they are in meats (Punzi, et al., 2005).

The Food and Drug Administration’s Chief of Toxicology (Scheuplein, 1990) calculated that 98.8 percent of a person’s chance of contracting cancer from the food he/she eats is due to naturally occurring toxins (produced in plants for their own protection). There are no scientific data substantiating claims that because a food is lower in pesticide residues (within normal ranges), it is “safer” in a meaningful context.

At an American Chemical Society Symposium, 12 nationally recognized experts reported (Rosen, 2004) that foods from animals fed GM crops are both safe to eat, and organic foods are no safer, healthier or more nutritious than conventional foods.

Consumers want assurance that their beef is from animals that are raised in a humane manner and handled with appropriate care. Livestock producers also understand that appropriate care/handling pays dividends in animal productivity and have developed a code of proper cattle care in their quality assurance programs (NCBA, 2002).

Some conventional, natural, grass-finished and organic beef programs have animal care/handling standards that go beyond those established by industry groups (Grandin, 2005). To be credible, however, such programs should be routinely audited by a third party and the beef must be from source-verified animals. 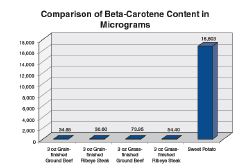 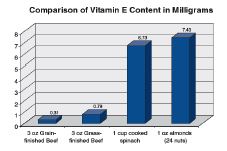 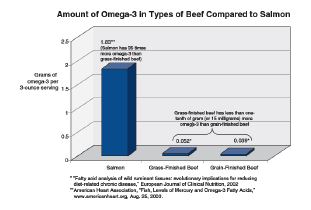 The taste, texture, tenderness and other properties of products carrying these designations can vary, and marketers may capitalize on the attributes that objectively describe their products and their production methods. That’s the nature of marketing.

The U.S. beef industry has a wide variety of types of beef from which consumers can choose, all of which are safe, wholesome and nutritious. Conventional, natural, grass-finished and organic beef are defined by production and marketing distinctions, not by nutritional or safety differences.